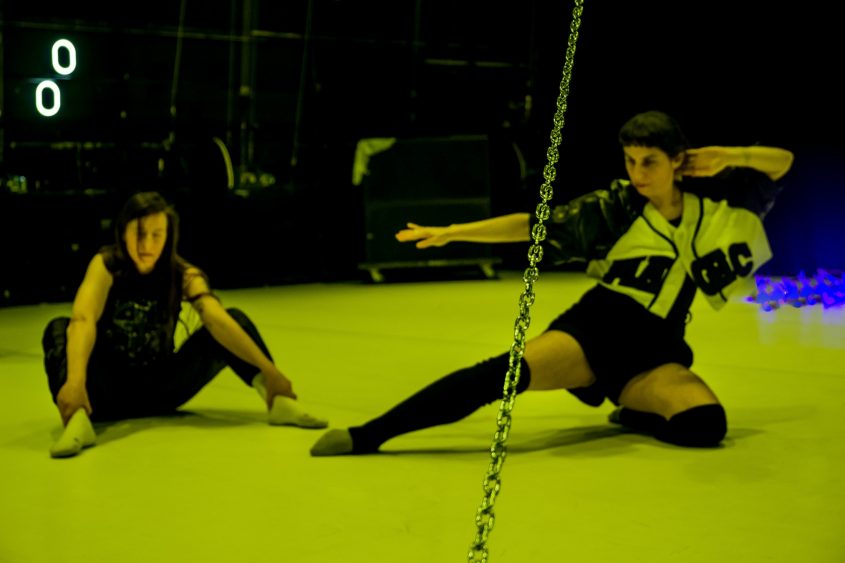 Dancing’s Demons started as a haunted historical research looking toward early Modern dance to understand what practices and blind spots carry through to us today in contemporary dance and performance. My grandmother had an older brother who came back from WWI shell shocked. She spoke very little about him but once shared that he was an interpretive dancer in the 1920’s and from him she learned “Don’t try to understand, just watch.”

The research began with a curiosity towards Mary Wigman’s classic Hexentanz (1914) and her relationship with National Socialism. Reading Susan Manning’s Ecstasy and the Demon: The Dances of Mary Wigman was an eye opener in more ways than one. I was confronted with my assumptions and unconscious beliefs about Wigman and of my own education. The first part of Ecstasy and the Demon looks at the origins and legacy of Ausdruckstanz while the second towards Wigman’s protege Hanya Holm and her part in establishing the first academic programme for dance in the United States at Bennington College – where I studied choreography in the 1990’s. Holm’s 1937 Trend was composed for over 30 dancers and dealt with the oppressive nature of groups and group conformity. Awarded “Best Dance of 1937” by the New York Times, Trend was regarded as Holm’s break with Wigman and a denouncing of the rise of fascism in her home country.

I was struck by how little documentation of classes taught by Wigman and Holm survives. Instead what is documented are variations of working with the energy in a room. Surprisingly, this had been my practice at Bennington. The lineage was broken. Holm was considered old-fashioned and ancient history. Our references were to downtown choreographers like Yoshiko Chuma and the School of Hard Knocks or those of the Judson Dance Theater. Yet listening and dancing with the room was the main choreographic practice I developed at Bennington.

From Wigman my attention turned to Vienna’s own Gertrud Bodenwieser. Her seminal work Demon Machine (1924) is our namesake and secondary score to Dancing’s Demons but it is Masks of Lucifer (1936), made in response to the rise of National Socialism, that has a stronger hold on our dance’s imagination. Many thanks to Carol Brown and Thomas Kampe for their excellently researched and led Releasing the Archive workshop offered at ImPulsTanz 2019. Both Carol and Thomas had early studies with members of Bodenwieser’s Vienna company who went into exile with Bodenwieser, dispersing around the globe, after the Anschluss.

Lastly Dorothy Alexander’s The Dance (1929) echoes through Dancing’s Demons. In 1921 “Miss Dorothy” established the Atlanta School of Ballet where I began my dance training in 1981. While rehearsing I had vivid memories of my first Modern classes with Virginia Rich Barnett at the ASB. It was through researching her that I learned Alexander’s history. She spent years in New York studying simultaneously with the famous ballet choreographer Michel Fokine (Ballets Russes) and with the legendary and highly problematic modern dance icon Ruth St. Denis at the Denishawn School. The same Ruth St. Denis who inspired Bodenwieser and Wigman…

„Dance shares with speculative fiction a serious flirtation with history made flesh, made world through invention and structural...