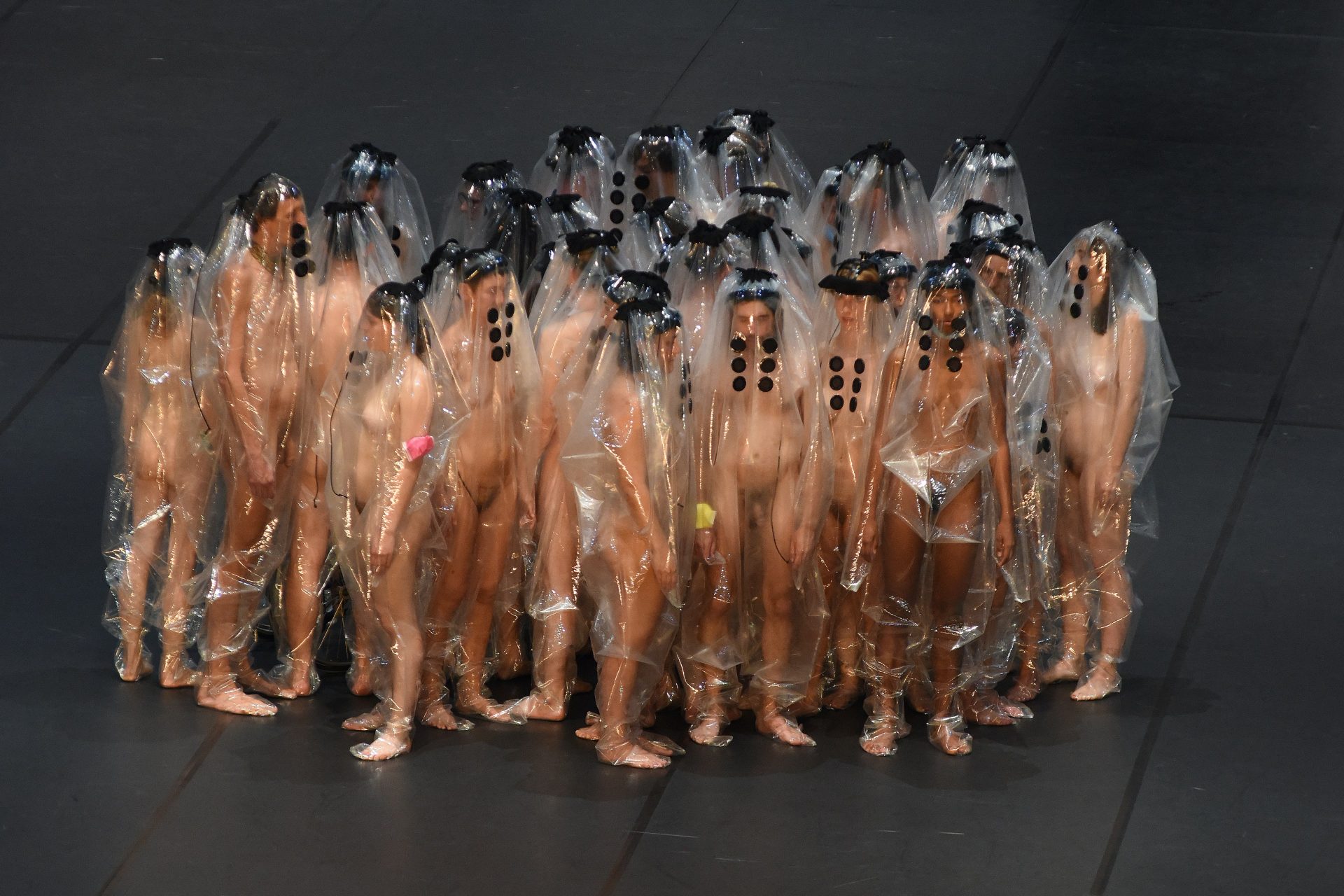 It’s been a year since Doris Uhlich’s Habitat premiered in Hall E. Approximately 600 spectators, sharing the stage area with 120 naked dancers, were invited to observe the experience of bodies drawing closer, of spontaneous movement and the increasing energetic intensity of the gigantic group choreography up close for two hours. They were all part of a subversive spatial arrangement where the focus of aesthetic perception was on the slightest bodily impulses and vapours, on asynchronies, coincidences and sudden disorientations, and no mistake or deviation could be concealed.

Today’s rules of an imposed interpersonal distance of 1.5 meters have rewritten the choreography. What had been an aesthetic and sensuous play with the dynamics of physical closeness a year ago can hardly be perceived as anything but a manifestation of safety precautions today. While, in 2019, Uhlich’s declared goal with Habitat / Halle E was to explore body constellations that don’t occur in everyday life, the current virus epidemic situation forces dancers and the audience alike to revert to the traditional fourth-wall configuration. The spectators watch the naked performers from about 40 metres distance as they enter the stage in their ordinary protective masks, looking for far-apart corners in the spatial architecture of the hall right from the start to keep as much distance as possible from the others: the ladder to the fly loft, the balcony at the back of the stage and a platform become islands for the self-absorbed dancers; their intensity and vocabulary of movement no longer trigger collective correspondences.

“I want to develop a project during and with the pandemic, not about the pandemic”, Uhlich states in the programme. And, indeed, Habitat / Halle E – pandemic version puts all the changes to spatial arrangements and social routines on view that restructured our social milieus in an instant seven months ago. In short: the choreography is so disturbing, so dystopian, exudes so much distance and gloom precisely because it isn’t a depiction of the pandemic but rather of its permanent intrusion into the scene. The stage is not conquered by metaphors but by metonymies of extra-artistic reality. The disruption of physical relationships, the frustration of haptic desire and the limited possibilities of addressing or affecting others make us aware that the aesthetic choreographic space is currently incapable of being autonomous. This is demonstrated by an impressive image of a dancer climbing up the 15 or so empty rows of seats that – perhaps for safety reasons? – have been left empty to separate the audience from the stage. The scene calls the performance practice of the most recent past to mind when auditoriums were left completely empty and a visit to the theatre was only possible via a computer screen. The approximately 300 “vacant” seats in front of us are occupied by the other performers over the course of the evening, as they try to get as close to us as possible. However, they can cross the long beam separating us from them only with their searching and expressive gazes.

The performers initially present themselves in the form of tableaux projecting distance, and remain standing scattered all across the stage space. They mirror the tableau of the spectators, so to speak, who also sit seperately in the dark, arranged in a checkerboard pattern. Slowly, the performers approach the front of the stage, spreading out over the huge area of the hall, and, in their own way, each of them seeks physical contact with the floor, which appears to be the only available reference object for a touch. They are in the process of moving in repetitive sequences but are suddenly stuck to the part of the stage floor they touch, and their obsessive efforts to change positions turn into a body image which, though energised by a staccato-like dynamic, is ultimately stagnant. The parallel and rarely synchronised movement sequences bear Doris Uhlich’s choreographic signature but they are perpetually haunted and distorted by the reality index of the present. It seems as if no pre-planned staged presentation can reach dramaturgical perfection in the current (global) conditions; the architecture of any well-composed landscape of bodies appears to be pervaded by irritations and the limits of free play, which now apply as a result of a collective ethical responsibility, keep manifesting themselves.

In contrast to previous versions of Habitat, the continuous musical/sound dramaturgy also breaks off after one track; the evening is largely dominated by a silence that exposes the faintest body sounds and accentuates the choreography of separation and isolation even more acutely. The soundlessness discontinues when the dancers unroll their transparent protective plastic costumes, put them on and hermetically seal their bodies off from the outside world. Because only now physical closeness and contact are possible, at the price of vanishing behind the heavy material of the glossy protective films that blur the bodies’ contours. This effect is most pronounced in an impressive horizontal body choreography, in which the dancers, lying immediately next to each other, move like liquid waves, reaching the limits of individuality in the process. The noise and the shimmering of the plastic stand out in this scene of essentially naked bodies.

When the performers straighten up again, disperse and approach us in their costumes, we become aware that their full-body costumes have become opaque – steamed up by their sweating and heavy breathing. All the energy expended by the dancers is deposited, in a manner of speaking, on the inside of their body shells, and the vapour symbolises the inward shift of the field lines of impact that are usually aligned between people. This impressive image shifts the focus to one’s own, isolated body, its biology, but also to its longing and melancholy.

Adam Czirak is a theatre scholar and dramaturg. He teaches at the Institute of Theatre, Film and Media Studies at the University of Vienna. His current research focus is on the theory and aesthetics of contemporary theatre, on concepts of participation, on the history and aesthetics of performance art in Central and Eastern Europe and on current trends in theatre and dance dramaturgy. 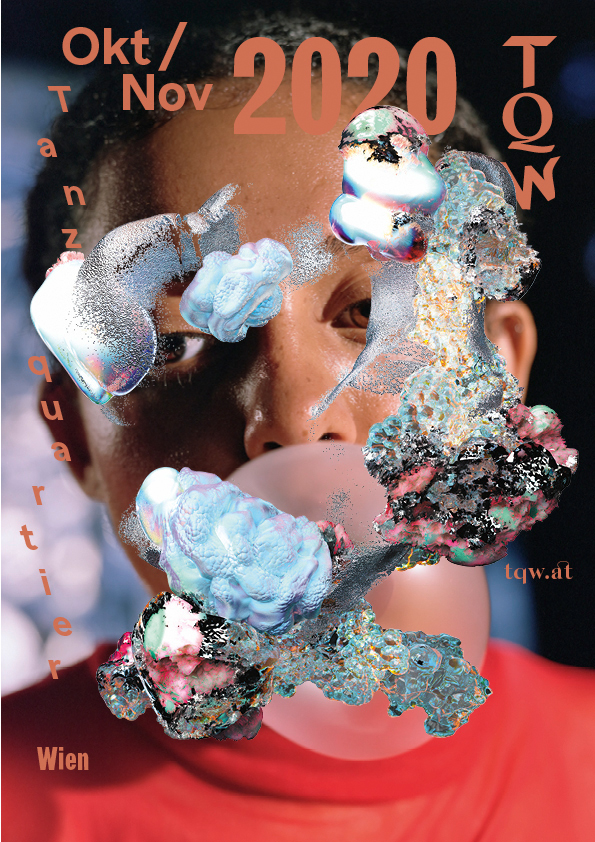 However, Doris Uhlich is prepared to accept this challenge, to find out where and how this utopia can still exist in times of Covid-19. What does the impossibility of physical intimacy mean? ...