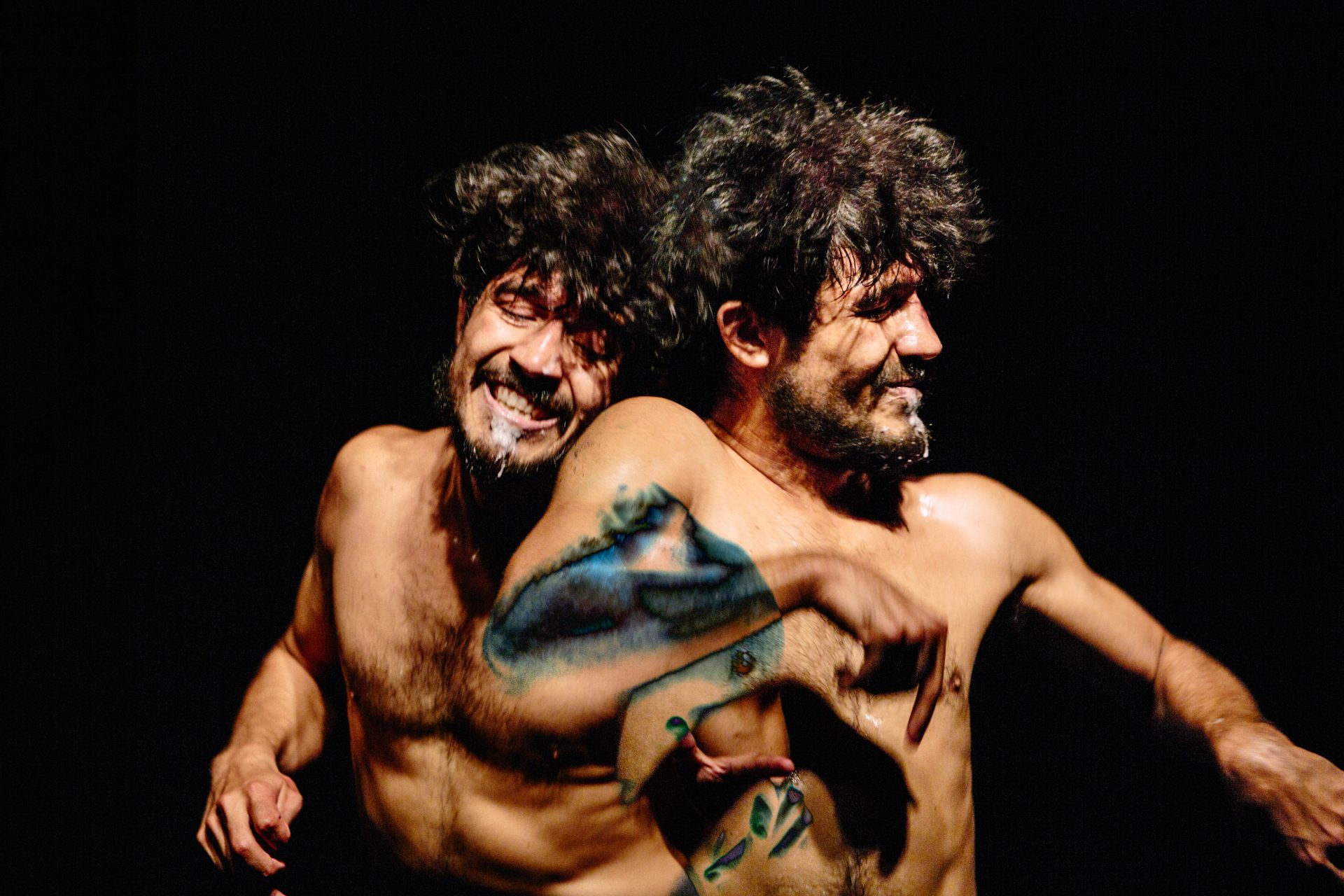 In Boca de Ferro, Marcela Levi and Lucía Russo expose us to a body that swirls ecstatically to become a world, that liquefies and trembles with excitement, and, giggling, takes the differences between nature and culture, male and female to the point of absurdity. In the following, some concepts are mentioned as marginal notes that seemed to resonate with me in this one-hour electrification.

Suddenly he’s there, on the edge: dancer Ícaro dos Passos Gaya meanders between the entering spectators, revolves around his own axis, elbows jerking at an angle between his body and the periphery, fingers splayed, eyes twisted, mouth open, tongue stretched out, stamping on the ground. The ears fasten on the rhythm of the feet.

Sweat is dripping, red from the colour of the face, much like a distorted mask. Bits and pieces of dramatised scenes pass through the performer’s poses and gestures There are no directions, the centre becomes the periphery becomes the centre.

Oswaldo de Andrade’s “Anthropophagic Manifesto”, published in 1924, conceived a people-eater, consuming the foreign other and appropriating it, as a radical figure of resistance against colonial power structures based on the distinction between reason and body, West and non-West. Devouring knows no division into body and mind, only a change of forms – “anthropomorphism”[1]. The anthropophagic cancellation of the self and the foreign other produces a body whose only constant is (ex)change, as Andrade noted: “From the equation of the self as part of the cosmos to the axiom of the cosmos as part of the self. Self-preservation. Understanding. Anthropophagy.”[2] Ícaro dos Passos Gaya’s fluid body, that appears to form new alliances with each step, each gesture and each beat, and in exchange disperses itself in the world, upsets any attempt at a constrainingly stagnant identification by which handed-down Western perception attempted to regulate bodies, thereby “[c] adaverising” them, according to Andrade.[3]

The present body moves super-animatedly at the boundary of life and death. In the excessive wasting of itself it calls Bataille’s idea of “unproductive expenditure” (dépense improductive)[4] to mind, which sees humans as beings of abundance, of excess, marked by an economy of exchange and communication. In the process, he anchors that which is base, terrifying, disgusting, which had supposedly been overcome and transferred to the colonial other, as fundamental aspects of life in the context of which concepts like “base” and “refined” cannot be separated from each other. This is typified by the illustration of Acéphale[5], i.e. a headless man, on the cover of the journal of the same name founded by Bataille in 1936. The figure with the head in his crotch creates a subjectivity that shifts  thought to the guts and does not separate reason and sexuality.

A sudden pause, a trembling, quivering, stretching, squeezing until something bursts out. Perpetual birth-giving. Shots are fired: death, coming back to life with wings fluttering. Absorbing the world while rotating, gushing into it dripping with sweat.

Michail Bachtin[6] takes Rabelais’ novel series from the mid-16th century about the two giants Gargantua and Pantagruel as an example of the grotesque body that serves as a paradigmatic means by which the popular culture of laughter consumes the dominant religious high culture. The body of the individual is not understood as separate from the world but instead as part of the all-encompassing cosmos, just as life itself is conceptualised as cyclic, unfinished, in the context of which dying and being born are not opposite ends of the scale. Correspondingly, the giants change their size, become landscapes themselves and Pantagruel’s mouth is occasionally inhabited by the narrator. The body orifices – particularly the wide-open mouth – represent gateways between inside and outside, which can be crossed at any time in both directions. Most notably, it’s the liquids that connect the human body and the body of the world. Rabelais, for example, describes how the giant Pantagruel’s urine flows in such quantities that it develops into a deluge. Elsewhere, the earth sweats profusely, and in the end, the seas are created from its sweat.[7] Similarly, the dancer, by dripping with sweat, spreads himself over the world. His skin is not disciplined, closed. Instead, the sweat marks an uncontrollable liquefaction of boundaries, which, as is well known, has been gender-stereotypically attributed to the female in the Western tradition. Excessively loud music: the “Crocodile” sings for us. The voice as a means of liquidation: “Bonsoir”, “Let’s go”, “Love”, “Maismaismaismaismais…”. Unrestrained cackling. Artificial voices, decentralised from ever-changing directions, wheezy, screaming, murmuring, each

singing about its own drama. There is no direction. The fragile beauty of a Renaissance painting, pulling the exterior inside, shifting the hip to the side, a slightly open hand slowly lifting, the other moving towards the body, a tongue instead of lips, the head glowing red, the penis laced high with pink ribbons. “Beleza”.

The fragmented voices pelt down on the performer who devours them and spits them out again as regurgitated sounds. Instead of a duality of eating and speaking, body and language[8], language itself is being digested and turned into entrails that extract themselves from the body. As opposed to watching, listening creates disorientation, comparable in its interminability with the liquid state. In her feminist essay, “The Laugh of the Medusa”[9], Hélène Cixous shifts the perspective from Medusa’s deadly gaze to her laughing, shrieking voice which rings simultaneously from the many mouths of the snakes that make up her hair. Instead of the headless man, in whose body mind and sex become one, she, who consists of nothing but a head, brings about the collapse of the static identity by means of her polycephaly and polyphony. Despite the sexually charged intensity, the fluidity of the voices’ gender in Boca de Ferro results in an asexuality that no longer reflects traditional differences. In the current climate of reawakening myths of completed identities and supposedly autonomous, “native” (national) cultures, the grotesque, disorganised, overexerting body that consumes the world and is, in this sense, a social body, is gaining new relevance. Just like we have entered, from the first breath or even as a body in a body, into a mutually consumptive relationship with the world, it is the unceasing process of appropriation, of revaluation or devaluation, by which culture fundamentally deconstructs and reconstructs over and over again. It isn’t the unconventional grotesque body but, on the contrary, a society that considers its bodies as identical with itself, as autonomous and supposedly reasonable, that gives birth to monsters.

Julia Ostwald studied dance education (B.A., Fontys Dansacademie Tilburg, NL/Escola Superior de Dança, Lisbon) and dance studies (M.A., FU Berlin/University Antwerpen). She worked as a dance educator for several years. Since 2016, she has been writing her PhD thesis about voice in dance at the University of Salzburg. She is also part of the doctoral programme geschlecht_transkulturell and academic staff member at the Department of Dance Studies.

As a result of historical smuggling routes, the music of the state of Pará in northern Brazil, in...