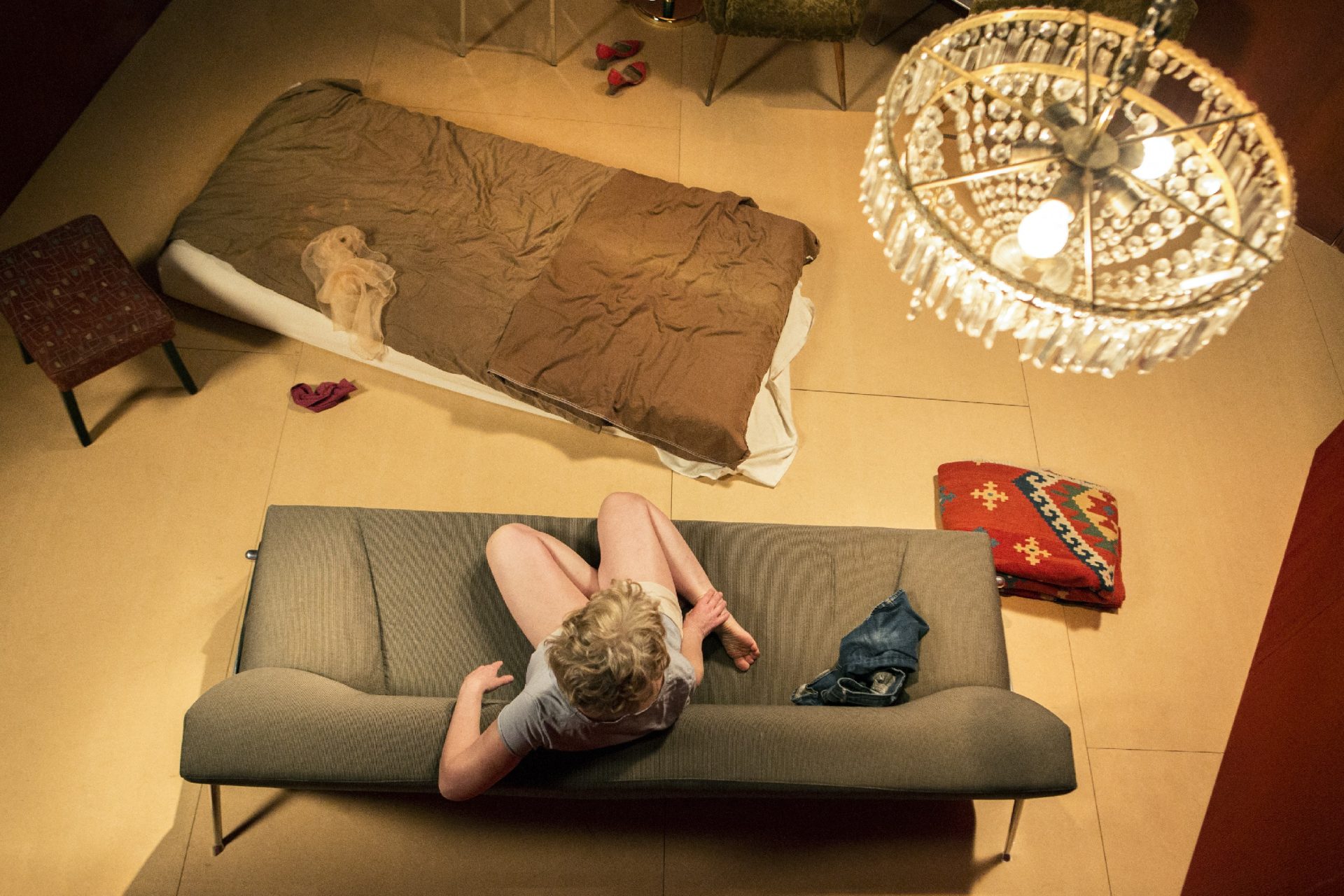 © Karolina Miernik
Margarete Affenzeller and Dominik Kamalzadeh on Maybe the way you made love twenty years ago is the answer?, This is where we are now and Meet by Christine Gaigg

DK      This is now the second time I have seen this performance in Vienna since its 2014 premiere at steirischer herbst. Again, I was immediately taken by the essayistic format: A woman publicly reflects on her longings, her sexual desire as an expression of de-limitation. I like the positive connotation of sexuality in the introduction: Referring to John Updike, Christine describes sexuality as transcendent experience. For me, there is a particular focus on negotiating where we stand today: She wants to point out that change has happened, and that it is difficult to experience once again what you were able to experience in the past. I consider this to be a brave act, after all, we are still not at ease talking about sexuality. And at the same time, there are social restrictions and norms making sexual desire a taboo. Accordingly, being a woman and talking about the desire to be overwhelmed seems rather like a delicate endeavour.

MA    I am not at all surprised to hear a woman talk about issues of sexuality and sexual desire. It reminds me of the phrase “Women talk about it while men do it (or not do it)”. But this could also just be a heterosexual stereotype. At least, I would be interested in hearing a male opinion on this matter, and I wonder whether it would be any different. And whether the feeling of having lost a space for communication is as intense. And what sort of insecurities today’s men feel: on the one hand, young boys are still being taught this outdated image of proactive masculinity, which you can already find in picture books for two-year-olds. And on the other hand, grown men are expected to get rid of this image altogether.

Well, if I think about the representation of male sexuality, I think of Steve McQueen’s film Shame in which Michael Fassbender portrays a sex-addicted man living in New York and suffering from his hormone- driven cravings. There, sex is like an illness, whereas in Maybe the way… sex is more like an untimely utopian promise. Christine gives a few examples: an orgasm al fresco in Vienna’s Stadtpark, an interview in Berlin after which she ends up in bed with the interviewed director. Both examples seem like something from another era. These days, sexual desire is controlled by social behavioural norms or commodified by internet pornography and dating apps like tinder. But I am not even sure whether this actually represents today’s situation.

Not quite. But I really liked the question Christine asked herself in her diary entry: “Are today’s people too cool to fuck?”. And I am sure she has a point there. Today’s sexuality has lost its nimbus of “being liberated”. We are only dormant beneficiaries. Of course, the 1960s/1970s had been the years of rewriting the norms of sexual behaviour, and this sort of sudden liberation had possibly been appreciated a lot more. However, consumerism does not acknowledge sex. There is no price (except for prostitution), no label, no status, nothing clean about it. 90s “Shopping and Fucking” is only left with “Shopping”. I dare say that our sexuality is only representative of a society feeling guilty and trying to be clean (veganism, sport, etc.). But we are also a “burnout society”, a society mostly functioning between 9 to 5 and thus weary of sex, which is almost always perceived as demanding, exhausting and time-consuming. By the way: Toshiki Okada only recently premiered a performance about this phenomenon of a young generation in Japan publicly declaring to have “no sex” for those exact same reasons (at Münchner Kammerspiele). So, if Christine talks about the lost “stream of attraction”, and contrasting the effects a walk across the Naschmarkt and a tinder match have, I only think: when am I ever to go for a walk on Naschmarkt?

Moreover, it is interesting that we will see a performance tonight in which sex will be performed by four actors without them actually having sex. It will be more of a re-enactment, in the sense that we might have forgotten about this cultural interaction. So, this is far away from the 1960s happenings or the performative practices of Richard Schechner and his New York performance group. Brian de Palmas documentary “Dionysus in ’69” shows us how Schechner’s performance engaged with sexuality in order to blur the lines between the performers and the audience. However, in Maybe the way… we are at a safe distance: The young and beautiful bodies, who are gasping and panting, and their sexual arousal remain a mere visual appearance. It all appears very much aestheticised and, thus, it is not at all erotic.

I had to think about this much-discussed idea of “dehuminisation” in the arts while I was watching the four performers. For example, Susanne Kennedy’s and Ersan Mondtag’s stage productions make human bodies appear like avatars with artificial skin and artificial voices. Or Ulrich Rasche’s mechanical humans. On the opposite end, there are Vegard Vinge and Ida Müller who create a lot of penetration, the “dirty” human being and his/her suppressed sexual desire emerging from synthetic masks and stage decorations.

Indeed, it is remarkable what disciplinary measures, as mentioned during the performance, can do to us. We adhere to the advertised self-restraint and, thus, restrain ourselves constantly. These measures of self-control are important if we think about preventing any abuse of power, e.g. the consequences of the #metoo movement. That is why Christine also showed us some examples of behavioural rules at US universities. Nevertheless, one has to be careful not to put restrictions on all social interactions. What I find to be important and relevant is that Christine’s performance complains about the fact that there is no “unsafe space” anymore, no place of transgression, no danger zone with the corresponding safeword “No, I do not want to”. In a sense, these kinds of spatial structures are to be found in theatres and cinemas. There, we can be part of something we do not dare to be part of in real life.

I like the way the performance seems to ask for and demands to be seen and read. This is also made clear by the manifesto-like speech, which is at the centre of the performance. Generally, we do not look at each other. Taking a glance or being playful is of no value to a neoliberal, efficiency-based system – Robert Pfaller already pointed this out during the discussion. These acts do not proof to be a safe investment; anything can go wrong.

What are the results of Meet’s experiment, of artificially creating an “unsafe space”? We can enter this intimate space and meet Christine, and one of the objectives is to look at and to read each other. It is an experimental setting in which you need to perform. But this constitutes a basic dilemma: While meeting new people, I want to leave control to the events’ contingency, I want to try and leave it all up to chance. But here, I have to interact within a certain set frame of conditions. There are rules I have to comply with and instances of shyness I need to overcome. This reminds me a bit of the issue at the heart of Yorgos Lanthimos’ satirical film “The Lobster” in which people are forced to find a partner in order to avoid being transformed into animals…

I do think Meet provided some opportunity to exercise free behaviour. There was chance. It was good to see that people had to leave their mobile phones at the entrance. Simply to give up this fixation and not be constantly distracted by it, so you can focus on the people around you. I am aware that this might sound like a cliché, but then again, who can honestly say it is any different? 80 percent of commuters stare at their screens. People do not look each other in the eyes anymore. Who looks at another person for more than two seconds even if they are standing right next to them? It does not happen, because we seem to identify this as a breach of privacy.

I really enjoyed the fact you had to return the look or at least tolerate it. It makes room for communication, but I am not sure whether you can experience this on the outside world anymore. And I was fascinated by the artist’s nudity. Somehow, nudity still defies norms. I had to focus on where I was looking and for how long. But at the same time, you get used to it. She managed to make it seem so natural. Perhaps this experiment would have had even more impact if you were to perform it at other, random places, just like a public intervention. Thereby, you would extract the “unsafe space” from the “safe environment” of Museumsquartier and something real, something unpredictable could happen.

Do you think this would make it possible for a more diverse audience to attend the performance? Indeed, this would be laudable, but it remains difficult to achieve. Nevertheless, Christine’s performances always make me happy, always help me create a liberated sense of looking at and doing things.

Margarete Affenzeller born in 1971, works as culture editor at Der Standard and is a regular contributor to Theater der Zeit. She lives in Vienna.

Dominik Kamalzadeh born 1973, works as cultural editor for Der Standard and is part of the editorial collective kolik.film. He lives in Vienna.

Maybe the way you made love twenty years ago is the answer?

In 2014, Christine Gaigg presented Maybe the way you made love twenty years ago is the answer? –...

Thu12.
Apr
Following Maybe the way you made love twenty years ago is the answer?/
TQW Halle G
Dance & Performance

This is where we are now

Due to illness Eva Illouz is unable to participate in the panel discussion This is where we are...

“I take the topic I raised in Maybe the way you made love twenty years ago is the...