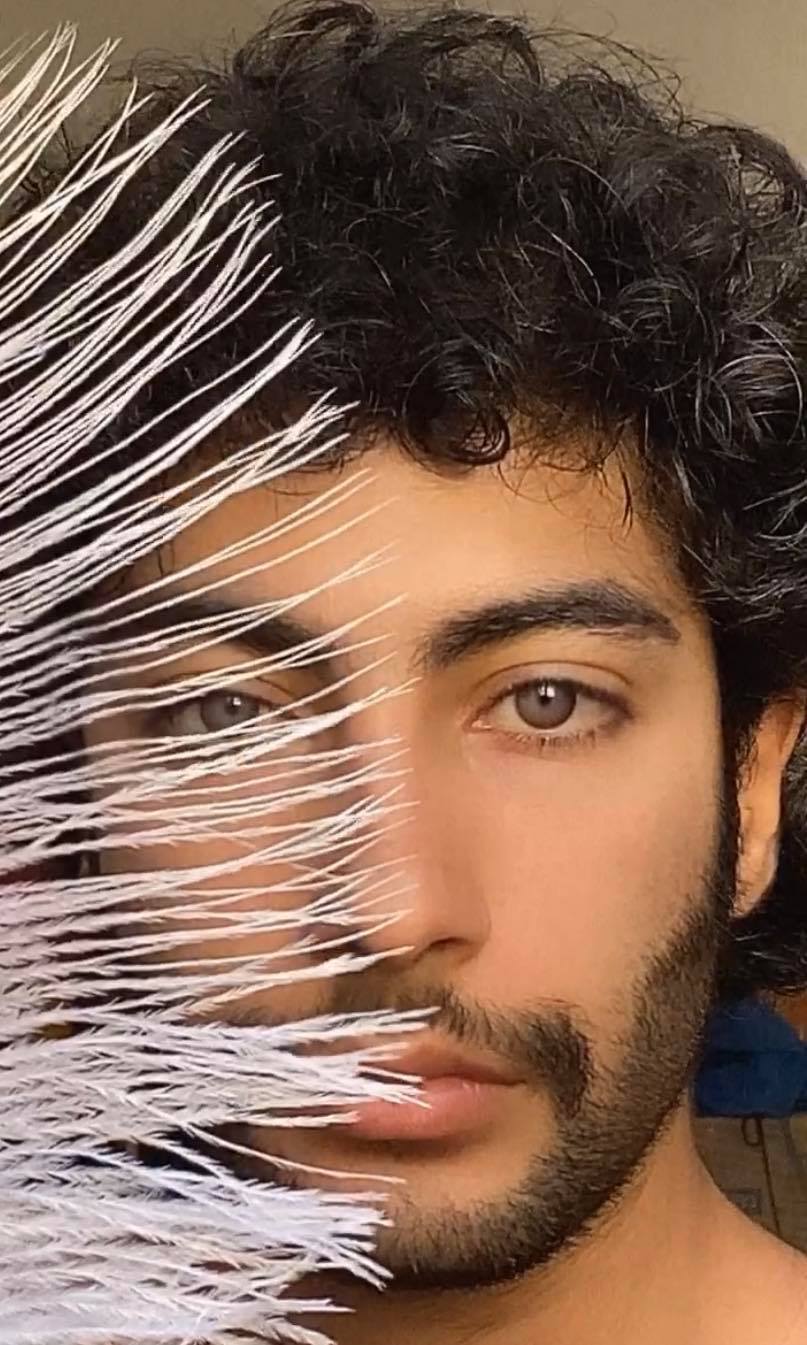 The premiere of Mowgli, that was planned for 11. Nov 2020, had to be postponed due to the lockdown imposed by the Austrian Federal Government to combat the Covid-19 pandemic. Nevertheless Sorour Darabi and their[1] team were able to conduct an intensive final rehearsal phase at Tanzquartier Wien/Hall G. Ursula Maria Probst witnessed an exclusive showing.

The COVID-19 crisis is a reminder of how fragile and precarious life is. Dealing with the ambivalences of human emotions, the relationship of the body with the world and the fragility of certainties that is particularly palpable these days, Sorour Darabi’s performances encourage us to think in terms of (trans)differences. For this, he*she develops new performative means of expression with fearless, rebellious commitment that comprises moments of vulnerable power. In a constant act of subversion, the rhythmic movements and lithe gestures artfully elude cultural and sexual identifications and rashly determined codes. Sorour Darabi was active as a member of the underground movement ICCD in Iran, where dancing has been banned and those who practise it as a form of protest against the ruling regime are being persecuted. They created their own rituals against everyday oppression and took part in the Untimely Festival in Tehran before studying at the Centre chorégraphique national de Montpellier, where they started to develop techniques of transformation and coexistence with the solo Subject to Change. Sorour Darabi’s choreographies have a reputation for radical sharpness. They have been a regular at international festivals in recent years with their performances Farci.e and Savušun (an ode to affect). Festivals crave performers who manage to bring in-between spaces, threshold and borderline areas or “hybrid spaces” to a new level adequate for our migration society in order to challenge intercultural, transsexual identities and gender politics by means of performance, dance and music. While Farci.e challenged the intercultural interaction of language, gender identity and sexuality, and Savušun critically examined the collective mourning rituals of the Shiites, which take the form of passion plays by way of fixed gestures of self-flagellation, Mowgli directly addresses issues of identity and migration policy, and Sorour Darabi proposes a reappropriation of the jungle as a metaphor for alternative hybrid spaces.

Who doesn’t immediately associate “Mowgli” with the boy from “The Jungle Book”, the coming-of-age novel which, inspired by stories about feral children in colonial India, was written by Rudyard Kipling in England in 1894? Mowgli, who grew up as a foundling with the animals in the Indian jungle, becomes a pawn in games of power. A trail that brings forgotten childhood memories to the surface but falls short as a subtext to uncover the complex intensity of Sorour Darabi’s latest creation, Mowgli. Contrary to the uncritical stance of the original “Jungle Book” towards colonialism, Sorour Darabi’s Mowgli is based on the song of the same name by the popular French rap duo PNL that attacks discrimination and racism. Drawing on their own experience, PNL condemn the stigmatisation of adolescents with a migration background as young savages. Ongoing multiple colonialities are inscribed in the body and mind, in work environments, sexualities, gender roles and scenarios of violence.

Determined to take a stand against discrimination and oppression and to invert the signs, Sorour Darabi goes a step further in their reappropriation of the jungle theme and creates a hybrid space by relating the concept of contemporaneity with their body in a performative, textual, musical and dancing rhythm. Sorour Darabi combines personal experiences and memories with intelligent discourses about feminism, transgender and relations of dominance, which they perform with the captivating, seductive power of a storyteller. They introduce us to complex political knowledge that is embodied only by those who have themselves experienced migration processes and reprisals by totalitarian regimes. The piece combines various influences and new adaptations of cloud rap, trap, Iranian pop songs, BDSM practices, trance, classical, conceptual and contemporary dance.

Mowgli evolves into an emotional journey pervaded with everyday activities that are transformed into ritual activities and whose translation bears strong aesthetic accents. Meanwhile, language becomes a kind of cartography, an act of becoming politically aware by working out terms of a glossary thus compiled that ranges from feminism to the use of one’s own body as a weapon. Hegemonic language and speech relationships and their affects are sabotaged. Sorour Darabi combines real wishes and fictional ideas with inventive narrative forms and dance techniques. Their multiple body brings real-life and fictional stories to life on stage by way of narration and dance in an inspiring manner. Repetitive as well as obsessive movements, sometimes in slow-motion mode, are characteristic of their choreographic vocabulary. The play with ambivalences even brings about moments of trance. A “lullaby” by legendary Iranian pop singer Googoosh, who mixes Persian poetry and various music styles in her music and shows projections in her performances of dissidents killed by the Iranian regime, becomes a poignant scene in a vocal performance by Sorour Darabi.

It’s a conversation that Sorour Darabi takes up with the audience. A question resonates: How have I become what I am if I am always the “other”? An ethos of self-critical openness shines through, as do analyses of sociotopes emerging from queer movements. Questions of dominance and its workings are raised: What does it mean to be human or/and animal in the game of power relations? You sense the urge to intervene yourself, to be entangled in dissonances in which the “authentic” remains a chimera that can never be caught up with. Mogwli is a visual delight carried by the work on the hybrid, democratic body as a linguistic tool to reformulate the nature of dance and performance and their place in a politicised world. At the same time, it’s an urgent appeal to reverse history, to articulate situations in their complexity in scenes that deal with the subliminal mercilessness of real events. The transitions between performance, dance, text passages and sound recordings are fluid. In the struggle for freedom of speech, Sorour Darabi has developed an abstract experimental approach to the narrative with a focus on the body and the context of staging. The performance thus becomes a kind of joint line of argument of a step-by-step process, with each step of the way being aesthetically, physically and conceptually integrated. To what extent are we capable of being critical of ourselves? Sorour Darabi proposes that the act of how one is perceived and addressed is a relational process that articulates social conditions as well.

They have chosen the jungle of the night as the setting for this. The minimalist stage set for the thereby created and performatively conceived hybrid space consists of a black carpet installation that runs along the wall to a ramp, and yellow spotlights. A feeling of timelessness is produced. The darkness of the room suggests the possibility of other applicable laws and brightens up to an abstract green wilderness over the course of the piece: the jungle as a wild terrain that very few of us have ever set foot in. Sorour Darabi lives the stage, puts themselves in relation to the world, to the audience with every movement of their body, addresses them directly and confronts them with a fictional “more diverse”, “more open” audience.

Argentinean anthropologist Néstor García Canclini sparked an international debate with his book “Culturas híbridas”, aiming to develop the creative potential of hybridisation. Mixing and combining at the very instant of cultural exchange. As is well known, literary theorist Homi K. Bhabha was among the first to use the term hybridity. In his book “The Location of Culture”, he developed the figure of thought of the “third space” which opens up where people from different cultures with different knowledge and different habits meet and exchange ideas about meanings and differences. According to Bhabha, hybridity is characterised by the rejection of a nomothetic and essentialist discourse of the political. Due to the effects of the COVID-19 pandemic, we are increasingly confronted with the spatial and cultural separation of the control of power and the exercise of power. With Mowgli, Sorour Darabi focuses on previously unreflected differences as well as the political element of individual difference.

To put it bluntly, Mowgli is also about gender activism and geopolitics, about analysing where we want to go and how this changes the “We”, about our own concerns, about the policy of constant translation and transformation, about the fact that we don’t mean the same jungle when we use the same terms, and also about which linguistic, physical, intersexual codes, dance techniques, discursive methods and aesthetics cause a shift in standardised systems.

[1] Sorour Darabi uses the gender-neutral pronouns “iel” in French and “they” in English. For the German text we agreed on “er*sie”.)

+++ Performance postponed +++ Known for their radical and deeply moving pieces, which combine contemporary discourses on identity...