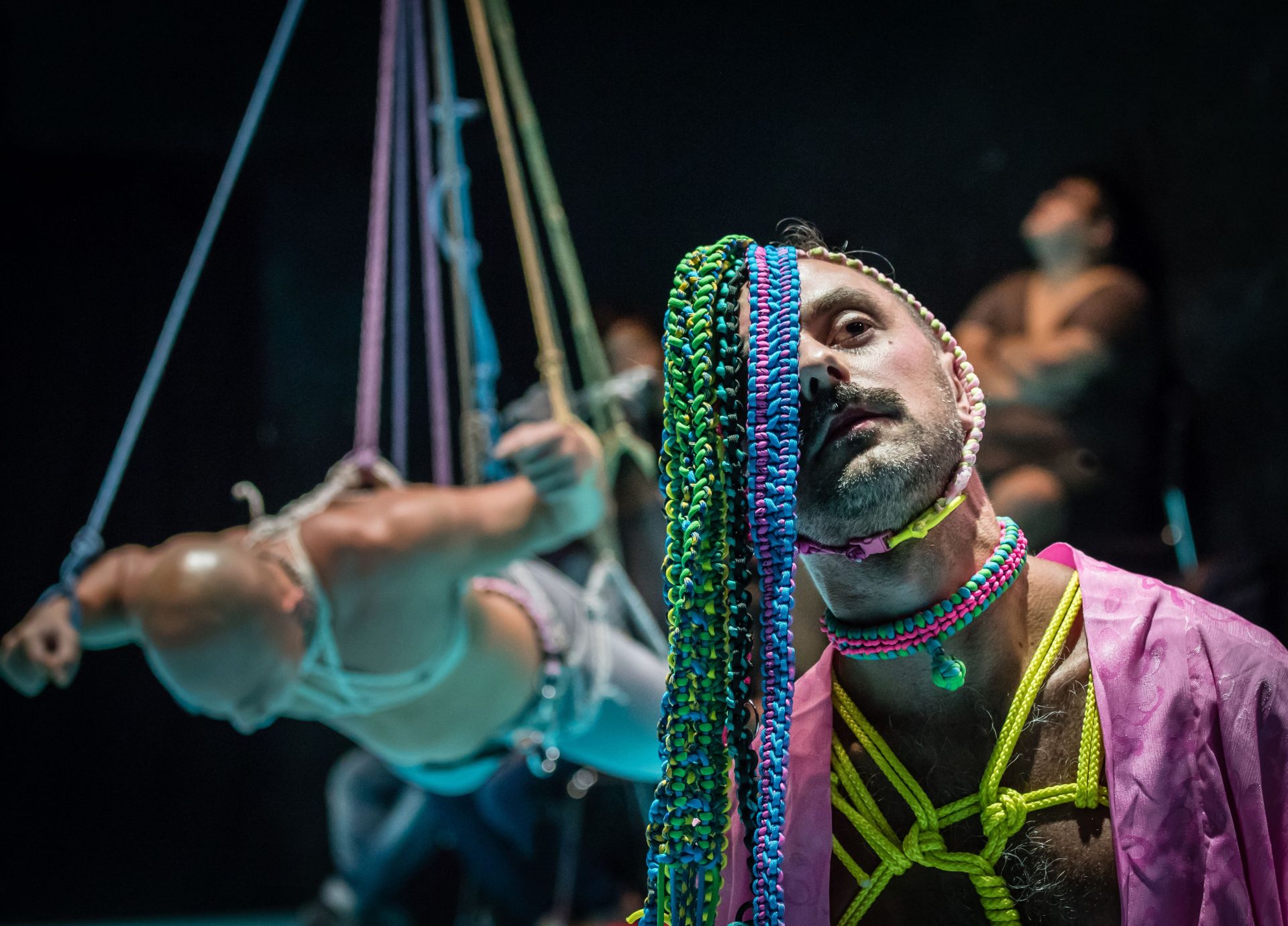 “Ooo, ooo, ooo, ooo, no, baby please don’t go”: it takes some time before you can listen to the audience’s first laughter during Luke George and Daniel Kok’s BUNNY. First, the performers literally need to manoeuvre into a dead-end situation – not without help from the audience. Now, one of the performers, Daniel Kok, is suspended from the ceiling, tied and bound with neon-coloured rope and gently swinging above the pool-blue carpet. After having succeeded in suspending his partner from a hook, bondage professional Luke George continues with himself, restraining his legs and eventually letting himself be tied up completely. A woman from the audience assists in tying up his hands, and another woman presses play on his iPod and now we can listen to the 70s makeout song “If you leave me now” by Chicago: Please don’t leave me. Absurd. None of the tied-up performers are able to leave the room.

The audience, sitting on all four sides of Halle G’s rectangular circus ring, could get up and leave, but they are also fascinated by the prelude to this impressive bondage show. And it will even get more engaging. In bondage terms, the word “Bunny”, as described in this evening’s programme, identifies the person being tied up, most often a “submissive woman”. The active, free partner (mostly a “dominant man”) is called a “rigger”. Within this choreographic bondage setting the roles are reversed, stereotypes cast away. Luke George, dressed in a pink silk kimono and ultramarine briefs and with a cornrows hair style extravagantly braided with coloured cords, shows signs of submissive behaviour, but he remains to be the one in charge. At least for the moment, Kok, tied male powerhouse in compression shorts and fishnets, continues to be the restrained one.

“He needs someone to give him a push”, tied up George softly speaks and nods in the direction of Kok, whose bound body stopped rotating. But there are no orders. He speaks with a determined but kind voice. Someone from the audience finally decides to go and push the performer, who is suspending from the ceiling, so he may swing again. This is just one of many interactions between the audience and the performers during this twohour BUNNY show. George and Kok’s instructing manner makes audience members perform extraordinary things. Or lets them be part of something extraordinary. “Can we bring him down?” One audience member frees Kok with a surprising amount of expertise. Also, George lets someone else undo the ties on his hands. There are knots and ties, one woman walks a fellow audience member and restrained person on a leash around the stage, another person gives one of the two performers a spanking with a red stringed whip, and at some point, a woman lets herself be tied up and observes with interest the process of emptying out and lining up her black backpack’s insides in front of her – cosmetics, money, credit card, bottle of water, pills, keys, perfume. At the same time, another audience member is being gagged and tied up, and he ends up suspended from the ceiling in front of everyone’s eyes while we listen to Jimi Hendrix’ “Voodoo Child”.

Even if it may sound like it: fortunately, this is no awful participatory theatre. The atmosphere is cheerful and mindful, and what may look like violent S/M and torture is more of a merry gathering; all is possible, no one has to. Luke George and Daniel Kok carefully choose the participants and respectfully accept someone’s decision to refuse to take part. “Are you okay with this?”, is just one of the questions they ask. “Are you feeling alright?” It is all about being together, all about commitment. There is even a part which involves Coachella-like vogueing, making those neon-coloured braided cords swirl around.

After nearly two hours, all bound people get untied, Daniel Kok puts the displayed insides back into the bag, and I wonder if he deliberately chose this audience member with her black backpack as he pulls the strings which are fastening up the backpack. The last act of tying something up. But not quite the end: colourful cupcakes are handed out to everyone who participated. A kind gesture, a delightful evening. And captivating for all of us.

Christopher Wurmdobler is a journalist and author living in Vienna. He studied applied theatre studies in Giessen and worked at FALTER for almost twenty years, where he wrote i.a. about performance and dance. He’s part of the collective H.A.P.P.Y and of the main cast of the immersive theatre ensemble Nesterval. His new book SOLO has been recently published at Czernin Verlag.

Luke George and Daniel Kok exploit the physical properties of ropes and knots to unpick the boundaries of...