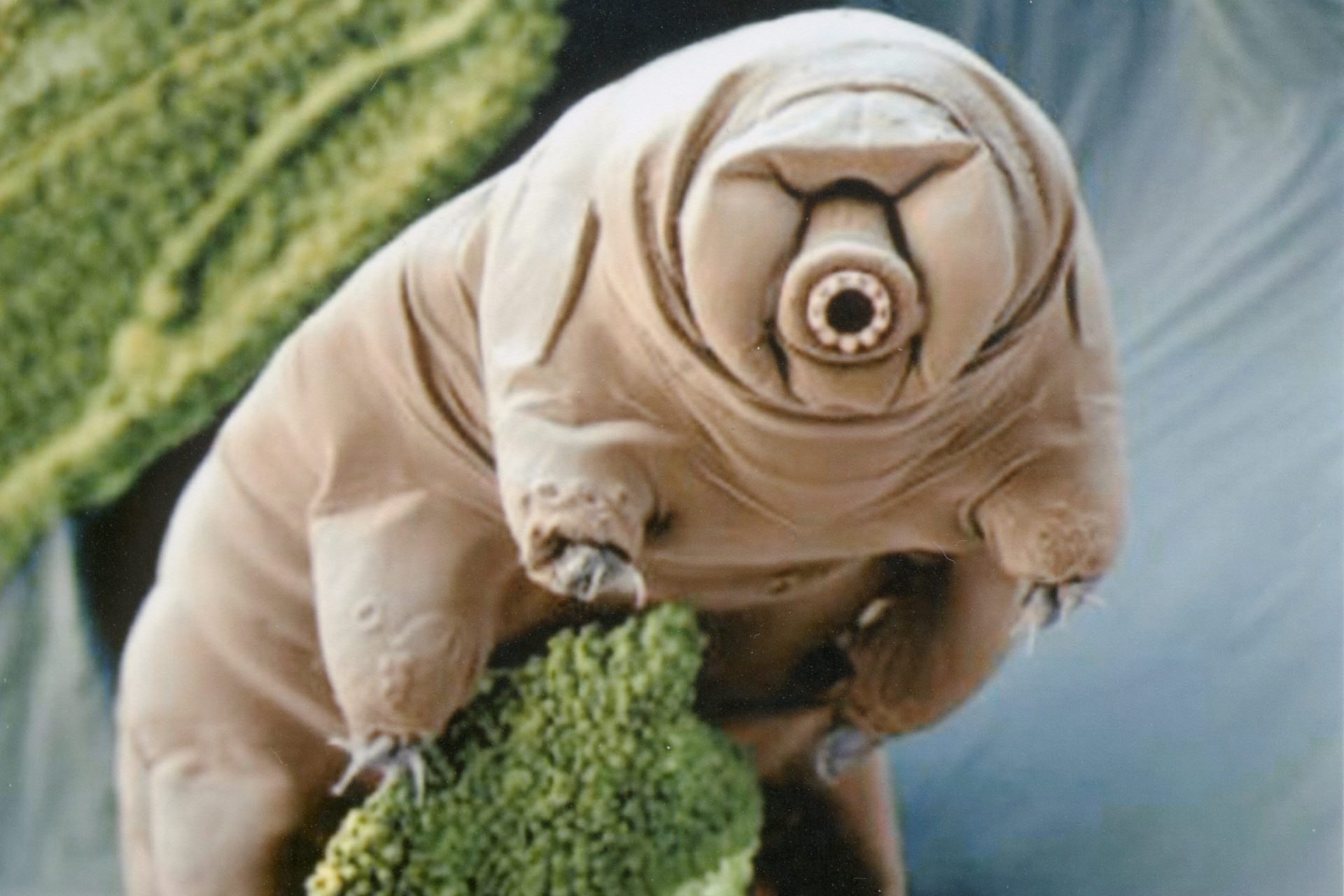 We enter a room whose walls are covered by black curtains that absorb any potential organic echo. The audience arrangement consists of ten platforms, sprinkled in a half circle. Hannah De Meyer wears a black cotton shirt with long sleeves, high-waisted blue jeans, white sneakers with a blue line running along either side of the foot. A tender yet radiant red light colours her neck into pulsating edible matter. Now, the audience members’ cheeks have the same colour. I meet Hannah’s eyes and I get a wink; she, too, acknowledges a memory of having shared this exact same space to show our pieces six months earlier.

Hannah is carrying a banner-like sculpture backpack with a bent metal tube that holds a picture. I discover the image to be a family of yellowish mushrooms that resemble thin, long fingers. The sculpture floats behind Hannah like a sensory tentacle. A little behind me on the floor lies an assortment of gadgets with hundreds of knobs – these are effects and pedals for the shimmering red-and-white Fender Telecaster lying on the floor. On the wall to my right, there’s a projected still image of an impressive ant. On the left corner of the projection it says BBC, British Broadcasting Corporation, which, for a second, makes me think of Brexit. I look again at the ant which seems to be occupied with something else than “to be or not to be, European”. The scale of the projection is enlarged, macroscopic. It seems to me that Hannah is compassionately observing non-human inhabitants of the world very closely, not assuming but imagining their sensations inside herself. A soft, instinctive pressing of the floor starts, similar to a cat kneading a pillow. Newborn kittens knead the belly of their mother cat to stimulate the milk flow from the nipples. Cats also have soft scent glands on the bottom of their paws which secrete an oil that serves as a territorial marker, an act of claiming space. A cat kneading your lap is not only feeling comfortable but possibly claiming you as their own. I imagine soft scent glands on the bottom of Hannah’s paws, which she rubs on the surface of the black dance floor.

Apart from the amplified suckling sound of Hannah’s mouth, there is no other sound in the room. Yet, her ondulating rib cage, seems to me to be humming “In a Sentimental Mood” by John Coltrane. “Have you seen them? Has the moon risen and have the stars come to join us?”, Hannah asks while digging into what now seems like moss or sand under her paws. The creature that used to be Hannah De Meyer is now floating, never quite surrendering to gravity. “The moon doesn’t come here anymore, the stars are gone. The stars are memories of the stars.” Her entrails produce babble and chatter, wet sounds and gnarly murmurs. “Jakobin, make some music! Make us move, make us warm, make us sweat a little, make us drip, until our skin cracks open. Make us move until our limbs tumble down!” A beat begins. A wonky harp sound escapes from the electric guitar, accompanying the beat. “By the fifth beat our organs will fall from our bodies. Kidneys, liver, heart, lungs, the brain; the brain is an organ too.” I imagine soft organ pouches quivering on the floor. I imagine the performer’s body as a body without organs while trying to remember what Gilles Deleuze meant by that in Anti-Oedipus (1972). At home, I take the book from the shelf and read: “In order to resist organ machines, the body without organs presents its smooth, slippery, opaque, taut surface as a barrier. In order to resist linked, connected and interrupted flows, it sets up a counterflow of amorphous, undifferentiated fluid. In order to resist using words composed of articulated phonetic units, it utters only gasps and cries that are sheer unarticulated blocks of sound.”[1] Thinking through this most rigorous philosophical nonsense[2], I interpret Hannah’s artistic proposal as both critically post-humanist and ecofeminist, advocating a moaning and dripping anti-anthropocentric rebellion.

The electric guitar begins to play a charming lullaby and the BBC ant comes alive, uncoiling a fungal antenna from its neck. “Mushroom woods, plant talk, voices of hurricanes, tongues of rain, language of the deserts and speaking stones.” On the screen, yellowy mushrooms grow side by side on woods and sticks.“ From our decomposting organs, ghosts rise. Come here, we have been waiting for you. You are exquisite!” I imagine the disintegration of my body into the earth and it feels like a sensual experience. Composting is so hot![3] At home, I choose an anthem for today’s baubo; a spread-out cunt with a fierce gaze, playing an electronic harp: “Lonely at the Top” by Fauna from the album “Infernum” (2018).

Lau Lukkarila is a choreographer and performer based in Vienna. They studied theatre, acting, contemporary dance, voice and performance in Metropolia University of Applied Sciences (FI) and the Royal School for Performing Arts (ES). In 2018 they received the Austrian Federal Chancellor’s Office’s START scholarship for music and performing arts and the danceWEB Scholarship at ImPulsTanz Festival. In 2019 they performed the solo work Trouble at Rakete Festival at Tanzquartier Wien. They are interested in pathos and the presence of an “emotional body” in the act of dancing and performing. www.laulukkarila.com 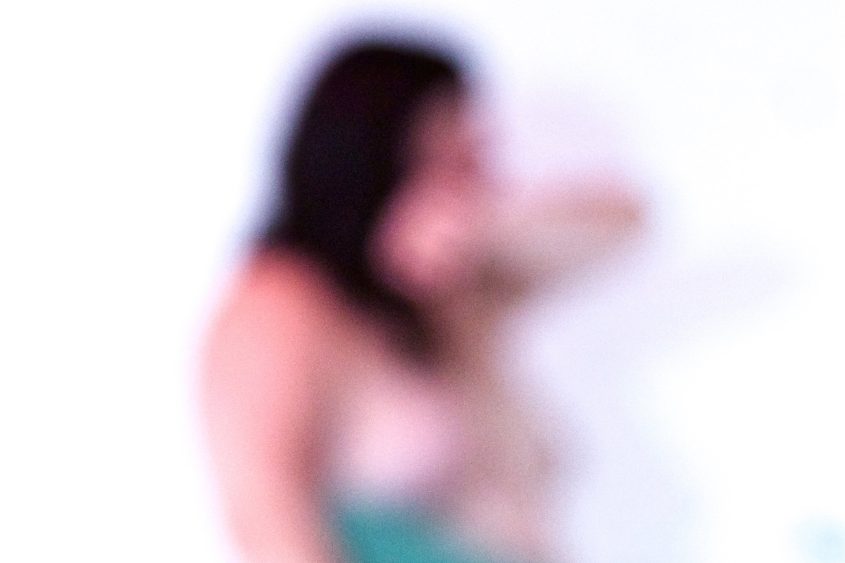 “Film can never do that” is what Belgian dance critic Pieter T’Jock said about Hannah De Meyer’s production...