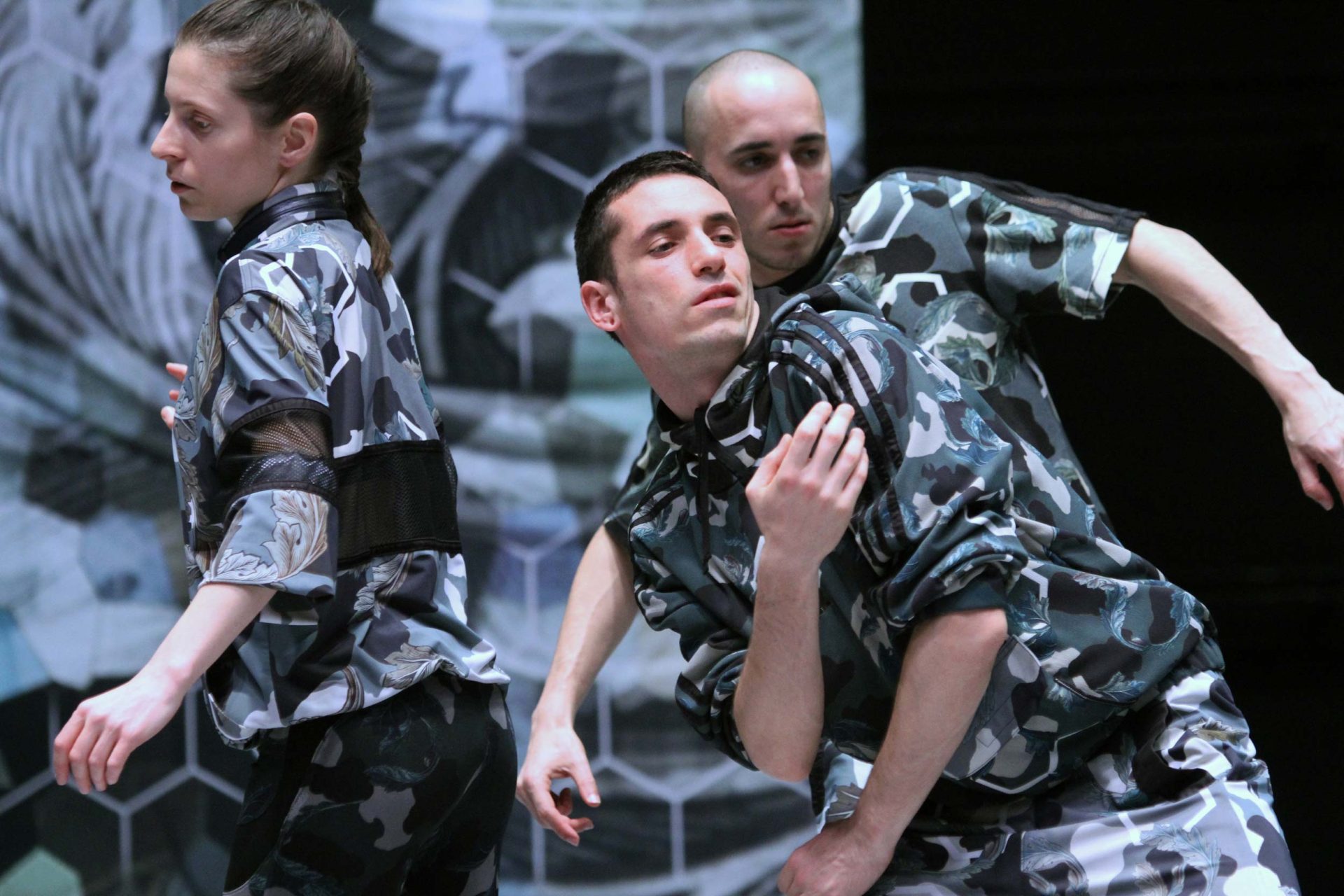 What an idea: human bodies with oil flowing in their veins. What remains for such motorised human beings of their cultural achievements? Little – or so you have to fear if you’ve seen Kat Válastur’s piece OILinity. Everything is reduced to a pulse beat. The people act animal-like, driven by primitive patterns. The yearning for security erupts repeatedly like a silent scream from their speechlessness. They seem vulnerable and driven. They perform movements in slow motion that seem to have lost their context: they applaud, without knowing whom and why; they fence, hitting each other in the process without ever touching. Their own body parts have become alien and develop a life of their own. The figures run fierce races without anyone ever reaching the goal.

The space Válastur opens up to us (the plain stage set by Laila Rosato consists of a few covered objects and walls with a pattern of honeycombs, feathers and camouflage) is an inside with little hope for the three performers to establish contact with the outside. Place your palms on both ears and hear the rush of blood in your veins: this, with the volume cranked up, is the sound (by Filippos Kavakas) that surrounds them. Sometimes you hear cartilages rubbing against each other in this acoustic internal perspective. The sporty camouflage look of the performers in costumes by Lydia Sonderegger underlines the aspect of competition that seems to recurrently exist between the three of them, but also suggests that they camouflage themselves, merging with the earth, which is the source of their fuel.

This is all the more obvious as it was a visit to Baku, the capital of Azerbaijan, which inspired Válastur to this upsetting work. The futuristic character of the city, where everything is devoted to the extraction of petroleum, fascinated her, but also gave her the impression of something being concealed. The dependence of the world on the raw material oil and what this dependence entails – this is where it materialises. “Petromodernism”, the oil age, will come to an end because the reserves are finite. But humans will drill, mine, blast to obtain the black gold as long as possible, whatever the consequences. Petroleum not only governs our economy, it has long since been shaping our culture as well. The dimensions of dependence are political as well as aesthetic and philosophical – Válastur addresses an obvious truth that has been brushed aside.

The Viennese premiere of the piece, originally created in 2016, fell on the day that children and young adults all over the world took to the streets in protest against the shock-induced paralysis in which the powers that be remain instead of taking active measures against the climate catastrophe, while the latest oil spill was drifting towards the most beautiful coasts of France. A turnaround does not seem to be in sight, and the apocalyptic mood in Válastur’s work could be a plausible dystopia.

But no, she releases us in a strangely conciliatory spirit: after monotonous slow motion, frantically hectic rushes and constantly alternating states of isolation and communality, in which the three performers have spent an hour marked by great futility, an outside opens up for them. The gushing of the fuel in their veins is replaced by the chirring of crickets and other sounds of intact nature. At last, they discover what has been hidden under the black rubber covers: objects full of mythical symbolism, enigmatic but still providing meaning. Nature and culture redeem the driven humans – is that a valid interpretation, Kat Válastur? It would be cause for hope, at any rate.

Judith Staudinger studied theatre studies and musicology at the University of Vienna and graduated with a thesis on the British performance group Forced Entertainment. As an arts and culture journalist, she wrote for the Austria Press Agency and did freelance work, e.g. as a member of the editorial staff of the online magazine for dance, choreography and performance corpus. Judith Staudinger has provided dramaturgical advice on projects by Jan Machacek, Oleg Soulimenko and Doris Uhlich. She currently works for the Wiener Konzerthaus.