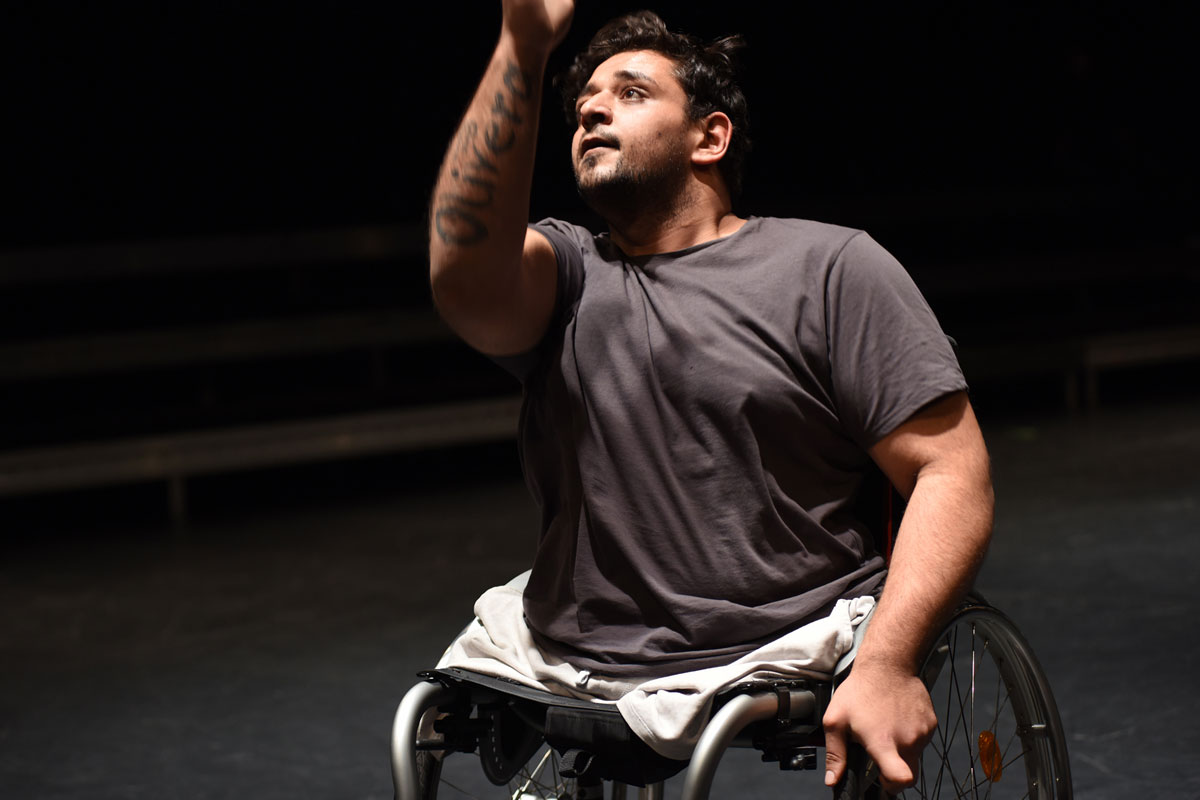 Two naked bodies – lying on the floor, crawling. This is how the audience are welcomed in Doris Uhlich’s Every Body Electric. It’s like an allegory for a helpless human being who was thrown into the world without being asked. All the more so as the performers with whom the dancer and choreographer has developed her latest piece are persons with physical impairments. Meaning: maximum helplessness, possibly even desperation? Far from it. Make no mistake. Rather, it is important to get one thing straight from the beginning: this piece isn’t about issues of normality and capability, about deficiencies or flaws. What Doris Uhlich examines instead is the pure, physical fact of being in the world as a body. She shows how unique and special every human being is and how individual their means of expression are. And people is what we all are, or, as Depeche Mode sing at one point in the performance: “People are People”. “Different people have different needs” – it might just be as simple as that.

The nine people who perform the piece, Erwin Aljukic, Yanel Barbeito, Adil Embaby, Sandra Mader, Karin Ofenbeck, Thomas Richter, Vera Rosner, Danijel Sesar and Katharina Zabransky, are all experienced dancers and performers. They present themselves, introduce themselves. “Forms of energy dance” or “energetic icons” emerge in an interplay with electronic beats, rock music or in silence, together or alone. Distinctly personal, dense, intensive patterns of movement that reveal a person’s nature more thoroughly than any verbally uttered anecdote ever could. They are movements coming from deep within the bodies, from their memories and experiences, and that’s what makes them so charged with meaning. Even if some of them are just the smallest of stirs, an arm being swung, a hip going back and forth, a dropped jaw jiggling – they all have their own energy, their own force. They all have their own stories. “The external image of the energetic icons is a kind of mirror image of my inner self; I uncover an additional layer of the individual within me”, as performer Danijel Sesar puts it. Doris Uhlich calls the unearthing of these movements “futuristic, energetic archaeology. Everybody has their very own energy resource, carnal pleasure and ways of articulating it. And every body has specific dynamics, specific beats.”

And it isn’t only bodies that dance, the wheelchairs and crutches come to life as well. Sometimes they are actually extensions of the body, are integrated into the movements, used as tools or moved themselves. But they are also taken apart, left standing because they are not needed for the time being; they have to endure their users’ aggression. Apropos aggression: the forms of energy dance express all the emotions people may develop in social interaction. Moving are the scenes in which the performers, using their electrically powered vehicles, drag each other along, carry one another, drive about, help each other when they become exhausted. But there are also gestures of dissociation. And there are playful, jocular moments, for example, when the wheelchair users keep heading for the first rows of spectators at full speed – only to brake right in front of their feet.

As in previous pieces by Doris Uhlich, the fat dances, and the naked flesh dances as well. It could be an exposure, a subjection, but it isn’t. “The nakedness in Every Body Electric is an important step towards the performers’ self-assertion. I have shared my ‘philosophy of the flesh’ with them. The removing of clothes adds another layer to the piece”, Doris Uhlich comments. What she does is, in fact, a philosophical undertaking: How do things work (out) between the bodies and the people inhabiting them? None of whom were asked if they wanted any of this in the first place. And all of whom are limited and helpless in their bodies that are not capable of doing so many things the mind would perhaps want them to. In the end, it’s only a matter of definition, a construction to define some limitations as “normal” and others as not. However, this philosophy teaches us that the limitation isn’t what defines the person. It’s the energy contained in each individual body, an energy it can produce itself but which it can also pass on, share. It’s the beauty of this energy, this vitality, these bodies. The bliss of movement and of possibilities, no matter how small. Every Body Electric doesn’t tell a story of desperation, this is by no means a gloomy evening. It’s an evening full of joy and life.

Andrea Heinz was born in Bad Reichenhall in 1985. She studied literary studies, philosophy, art history and Swedish in Passau and Vienna. She lives as a freelance author in Vienna, has published texts in Der Standard, Die Zeit, the feminist magazine An.schläge and Theater der Zeit, among others. She is currently writing her doctoral thesis on Ingeborg Bachmann’s Todesarten (Ways to Die) project at the University of Vienna’s Institute of German Studies.

Doris Uhlich creates individual and communal “forms of energy dance” in this ensemble piece for people with physical impairments...

Doris Uhlich creates individual and communal “forms of energy dance” in this ensemble piece for people with physical impairments...