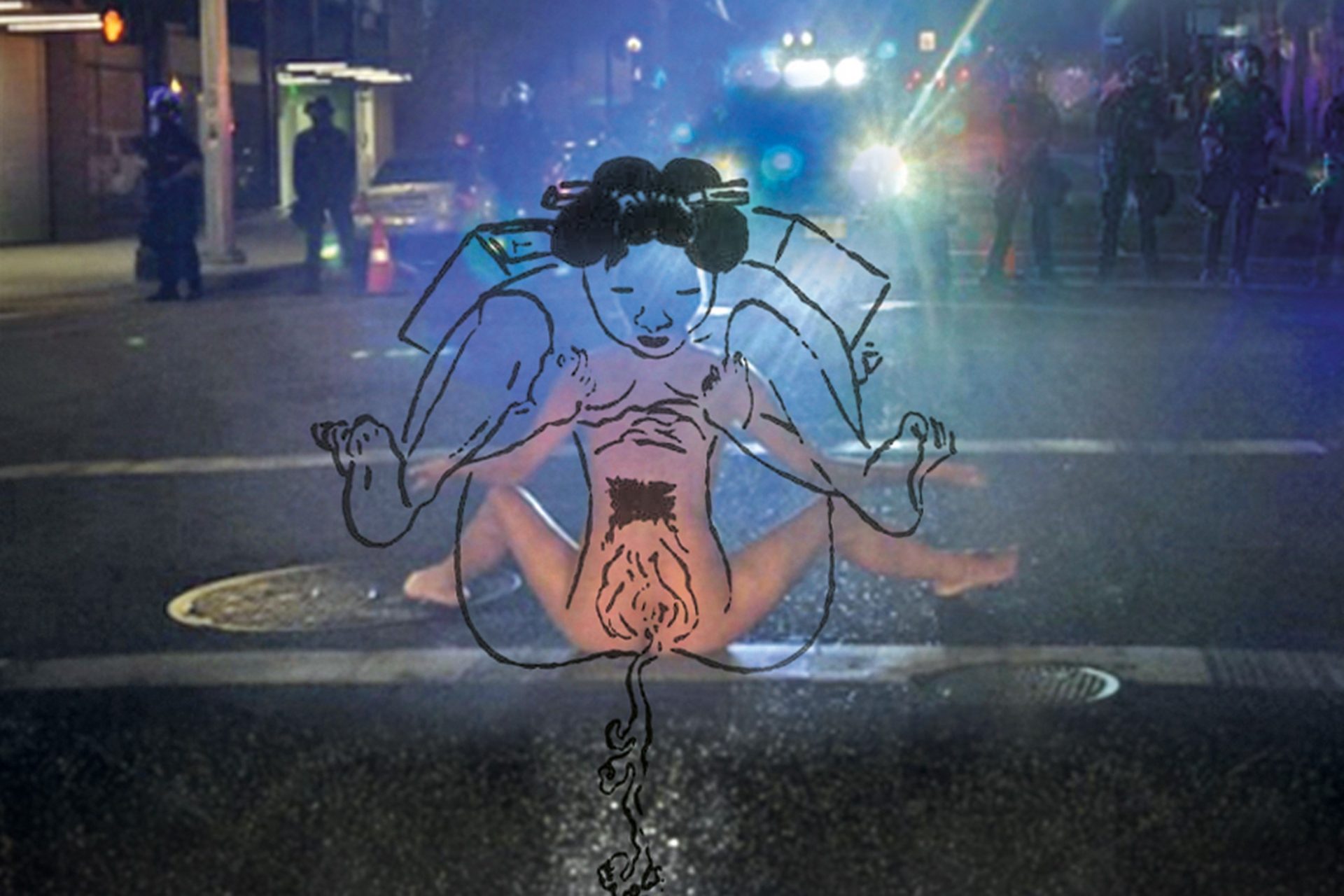 How did the idea for a performance about female ejaculation come about?

Gaigg: My pieces have focused on self-confident female sexuality for quite some time now. In my previous work, Affair, female ejaculation was mentioned in a few text passages, and I noticed from the audience’s reaction that there was a slight irritation. Then I discovered Stephanie’s book and felt vindicated: it’s evidently a topic of discussion at the moment.

Haerdle: I thought about writing a book on the subject over ten years ago but I came up against walls of contradictions and research gaps. Until I realised that these very walls were of interest: Why has this female fluid been forgotten time and time again? Why is so little research done on it? Why do investigations always have to start all over again?

Gaigg: I feel much the same about my performance. I put out a call in the “Falter” newspaper for people who had experience with female ejaculation to contact me. I went for a walk with all of them and then picked three women from Vienna who have a positive attitude towards their own ejaculation. I’m giving them a platform. And, around this, I give an account of the contradictions I came across in my research.

Haerdle: The major historical turning points were the 18th and 19th centuries. That’s when men and women began to be perceived as completely opposite beings. In earlier times, it was believed that fertilisation took place when both of them reached orgasm and released reproductive fluids. Semen was something that was common to both sexes. All of a sudden, the fluid became an exclusively male affair. Once the mechanisms of fertilisation were established, a woman’s sexuality and lust became completely inconsequential. She only had to be there at the right moment of her cycle to be fertilised by the man. The female prostate also sank into obscurity. From 1900 through to the 1970s, the discussion about female ejaculation largely ceased to exist.

Gaigg: I grew up at a time when the G-spot was being rediscovered. For me, ejaculation was something very special and intense. Only now during my research did I find out that it had long been a taboo.

The 1990s were shaped by Judith Butler’s gender theory, by gender as being constructed. Have we regained more freedom since then to also deal with actual physicality?

Haerdle: I have a background in the publishing industry; in the last 40 years, the number of books published on the vulva, the vagina, menstruation and sex wasn’t as high as it is now. I have a whole shelf full of them. But there is also a great curiosity for all things physical on social media, in sex podcasts and blogs.

Is the pressure of being expected to ejaculate under any circumstances a problem for women?

Haerdle: I too have heard that men are put out if their girlfriends don’t gush like hydrants. Many women who want to know more about it end up watching pornography which conveys misleading images. Ejaculation may consist of only a few drops.

Gaigg: I had planned to take part in a workshop myself but then Covid-19 got in the way. I came across a sex educator on the Internet claiming that he used his technique on 500 women and that it only failed to work for two or three of them. He has a background in the sports industry and to him it’s like a fitness exercise. Ejaculating as a lifestyle thing. This is exactly the opposite of what my original concern had been: for a woman to be able to let go in order to climax, for her not having to hold anything back.

Haerdle: We also offer workshops in Berlin. A woman said she had expected, or rather hoped for a lot, that it would be the greatest moment of her life. But ejaculating and climaxing don’t necessarily go together. She ejaculated in a very technical way. And was disappointed. What did make her happy, however, was the pussy massage that came earlier. She took the time to explore her vagina bit by bit. It was a great discovery for her to find out how different every inch inside of her felt.

Gaigg: In my notes from the early 1990s, I described my first ejaculation very euphorically. And I added: It cannot be confused with peeing. So I must have been aware of the discussion. I found two books from that time saying that the fluid is squirted from the G-spot. That isn’t the case, but with this information in mind it’s how it felt to me. In all likelihood, I would have approached the subject very differently if I had been socialised ten years earlier.

Haerdle: That’s a central theme of my book: how cultural ideas shape the perception of the body. And make a fluid disappear.

Gaigg: That’s why language is so important. I can’t help thinking that more women are ejaculating again now that it has become a topic of discussion once more.

Karin Cerny, born 1968 in Waldviertel, studied German Studies as well as Theatre Studies in Vienna and Berlin. She regularly writes about theatre in the news magazine profil and in the magazine Theater heute, as well as about fashion in the magazine Rondo.

Go for it let go