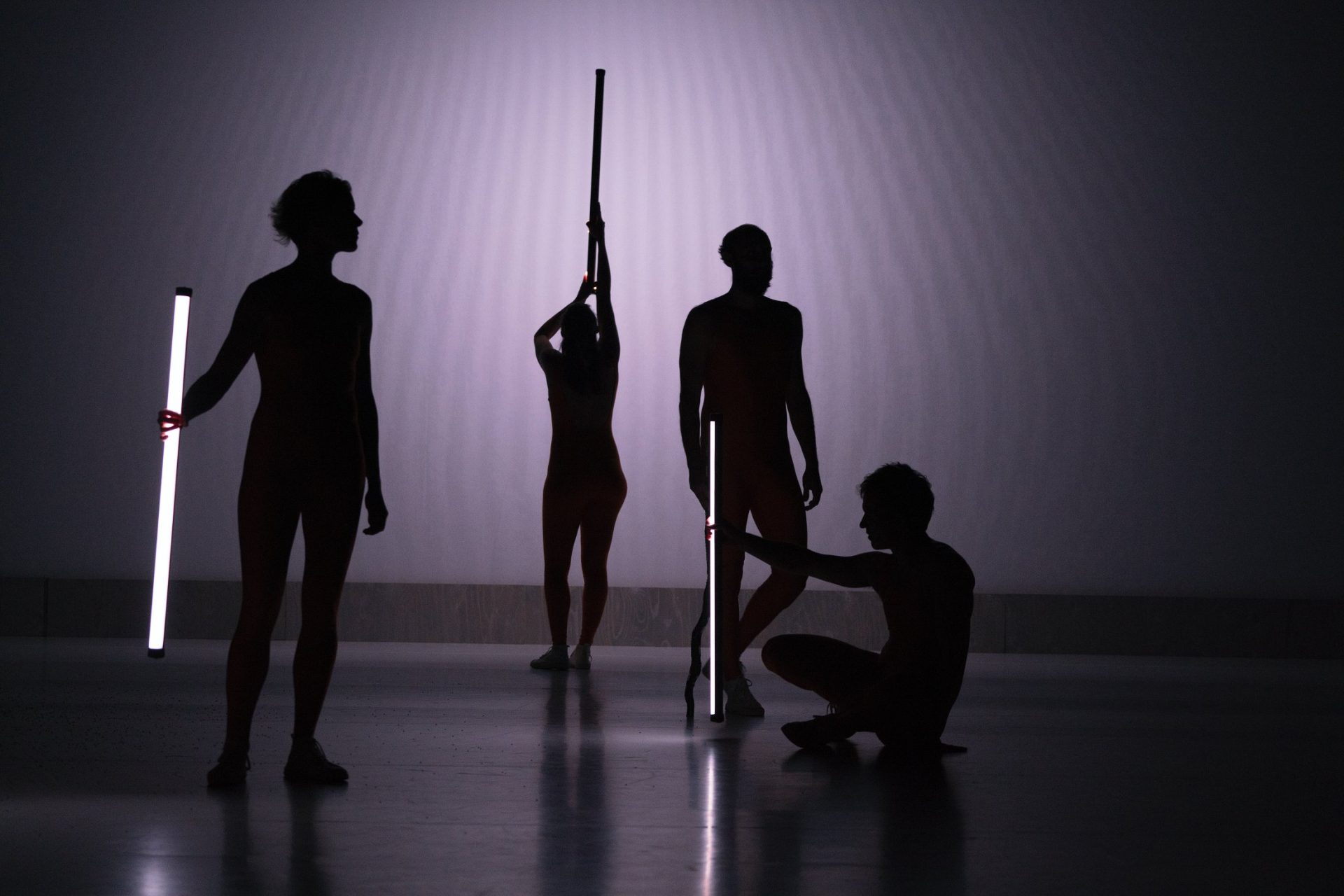 Mette Ingvartsen’s Moving in Concert was scheduled for the beginning of March and had to be canceled due to the Covid-19-pandemic. Guillermo Espinosa did see the piece in Madrid and inspired to raise questions that are again or still prevailing:

Do you picture yourself as an apocalyptic or an integrated kind of person? I mean, do you think the technological revolution we’re living in will result in a better world or will it lead us to the end of the world instead? Please, forgive me for using some old terms taken from an essay by Umberto Eco[1] that is now distant. It was written in 1964 and focused on mass-media society, the era preceding our current technological one. The world has changed so much since then. Today, we readily accept ideas like artificial intelligence, big data, virtual reality, digital communication, cybernetics or biotechnology, and we can even imagine future changes in the ontological, in the essence of being, unperplexed: we glimpse the post-human. All the things that sounded like a science fiction story back in 1964. As all this has become reality, the basic question, “Are we for or against a world that drags us along the path of innovation?”, is bound to remain very relevant in our minds. Will technology destroy the planet? Or will it bring about ecological transition? Will big data contribute to abolishing free societies? Or will it help to defeat tyrants? Will artificial intelligence prevail over ours? Or will it coexist with us and serve us faithfully? Will the post-human mean the end of our identity? Or will it entail a necessary evolution?

Mette Ingvartsen’s Moving in Concert wants to create a framework of abstract coexistence between the fundamental elements of this equation: the natural, the human and the technological. She does so by constantly appealing to metaphor. Successive layers of reading unfold even before the dance begins: on stage, a suspended black pipe will soon begin to spit out grains. On the ground, digital LEDs radiate white light. An opaque, twisted wooden stick lies between them. There is a cascade of muffled and jumbled voices, like a murmur in the background. Naked bodies make their entrance and take Hellenic poses, like ancient sculptures in a museum, circumventing the fragility of their nudity. This staging even subtly refers back to old tensions that emerged in the plastic arts in the 1960s. For example, rationality, pushed to the limit of simplification in aesthetic minimalism (Dan Flavin’s sculptural light spaces; or a later Wolfgang Laib and his small mountains of elemental materials), is set in contrast with the contemporary, naturalistic methodical production of Arte Povera (the bare, knotted wood sculptures of Penone, the desacralization of the sculpture by Pistoletto). One can even imagine that an action in the spirit of Fluxus, with all its assumed transversality, takes place under the surface, as only that slight murmur of voices interspersed with electronic sounds indicates. There is a known path in all this, but also an uncertainty of where it will lead us.

Then the dance begins: a timid displacement at first, that has an operative quality, appreciably pragmatic, devoid of any virtuosity, repetitive and simplified. Its reading is ambivalent but continuous: it is absolutely natural at all times, according to the logic of basic human movements, but there is also something artificial about it: mechanical and programmed. The wooden stick almost assumes the role of a command rod and passes from hand to hand: sometimes its bearer breaks free, stands in the margin, finds a different movement, splits off. A bluish, amoebic, cellular or protozoan creature emerges, a possible transcript of a new evolution, biotechnological and circuitrian, but also linked to the sea and the common origin of evolution. Its dismemberment serves to initiate a sort of invocation: an authentic electronic trance, reddish, progressive, in a frantic atavistic turn, distressing in its slow development, in the postponed anxiety of its liberation, but also banally mechanical, like the springs of a machine or an endless rendering process. Both the archaic and the atavistic as well as the new mechanical and the technological are constantly appealed to: in between, the remnant of the natural seems to be the very origin of dissent. It is not so much an opposition as an outline for their possible, perhaps forced coexistence.

Mette Ingvartsen’s approach to the current state of social existence, allegedly abstract and reasonably neutral, balanced and conciliatory, but not entirely free of conflict, ends up leaving a persistent feeling: it seems to warn us that change or progress in our position will not be conclusive. No matter how much the future promises us, there is a prevailing essence, an unchanging, immemorial, rudimentary and disconnected consciousness, pervading everything that humans produce and linked to their nature, that secretly guides and satirizes us, if it doesn’t sabotage any attempt at sublimation.

Guillermo Espinosa (La Laguna, Tenerife, 1975) is a Spanish contemporary culture journalist, researcher and independent art curator. He is well known for his articles and interviews on various subjects such as contemporary art, literature, photography, cinema, fashion and dance. He has also founded several non-profit independent art spaces, dedicated mainly to site-specific and performance art. He lives and works in Madrid, Spain.

+++ Performance cancelled +++ “Plasticity, in the wide sense of the word, means the possession of a structure...