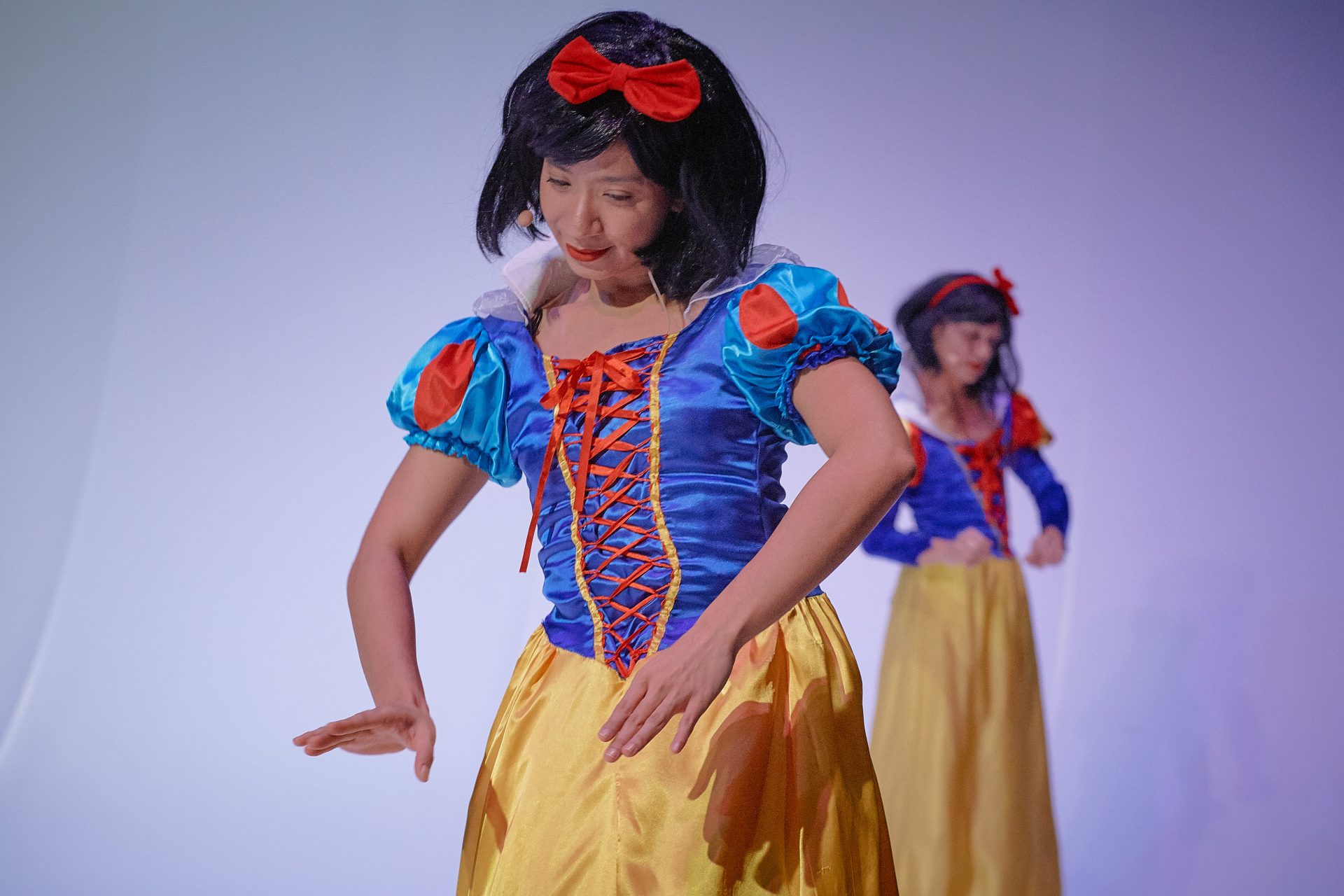 It is, or seems to be, an exercise in impossibilities. Here we have two Snow Whites, replicas of each other twittering in high-pitched voices. Anybody who has ever been to one of the five Disneylands in the world, or seen Finnish artist Pilvi Takala’s “Real Snow White” video piece (where, as an unauthorized Snow White impersonator, she is immediately surrounded by security in Disneyland Paris and asked to leave by management), knows how seriously Disney takes its authenticity. “Where dreams come true” can only happen if done in the trademark, copyrighted and approved Disney way, which means one designated Snow White within carefully bounded perimeters, never to cross paths with another Snow White lest we confuse the fans.

One carefully crafted Snow White, imitated to perfection, the legitimate princess within the premises of her kingdom.

Enter the bodies of Eisa Jocson and Russ Ligtas, princesses in every way, bows in place, daintily moving across the stage as they sigh synchronized greetings of “Hello, what’s your name?” and giggle in chorused perfection. The repetition of movement, the crafted smile, the carefully pointed toe and graceful arc of the arm – they are all part of the princess’ repertoire through and through – but in Jocson and Ligtas’ hands turn thoroughly and unnervingly sinister.

In its slow build-up to quite a tumultuous crescendo, Jocson and Ligtas manage to upend the body of Snow White (multiple times) by staying meticulously true to her “character”. What becomes overtly clear in the repetition and construction of the movement is the effort involved in being Snow White – to smile past the exhaustion, to be completely engaged and entertainment-giving, all the while choking on high-pitched compliments and subservience. It is uncomfortable to watch, and even more uncomfortable when the characters start talking to you. And the gaze shifts.

The point of un-synchronizing is a quiet one, where one Snow White suddenly leaves the other’s side to enter the auditorium, and this is where the stunted conversation begins. We are not a very generous audience. After a few tries, an audience member finally answers Ligtas’ question in reply to which he exclaims: “You can talk!” This is where the Disneyland Princess, whose role is constant entertainment, spins away from the 1937 American animated film. Engagement, smiles, making “magic” happen in the Magic Kingdom are mantras of the theme park, all Snow White had to do in the film was keep house for the seven dwarfs and send them off to work. She never had to sign autographs or pose for selfies. The incorporation of the side chatter between two entertainers in Tagalog[1] while continually speaking to the audience was one of the more noticeable breaks in Princess, one where the construction evidently faltered and that provided some relief.

The impossibility of the Princess trope, in her perpetual helplessness and need of rescue, in her goodness and obsession with housekeeping, in her “lips red as the rose, hair black as ebony, skin white as snow.” Skin as white as snow.

Jocson and Ligtas at one point issue the audience with an apology (“I’m awfully sorry, I didn’t mean to frighten you. But you don’t know what I’ve been through! I’m so ashamed of the fuss I’ve made. What do you do when things go wrong?”), which in time turns into an accusation.

There is no real apology here, the body of the princess is an empty vessel inhabited by those who need the work. The construction of this fairy tale is based on the sweat and never-wavering smile of the body working, the body of color working – of a body of color always working.

This is familiar territory if you have been following Jocson’s work. A master in embodying the affects of an entertainer’s daily grind, the sexualized, the fetishized, the underbelly of a migratory trajectory not often talked about in the open but lurking in the shadows. The body in this case, that of the Princess, is the most PG[2] Jocson has taken on so far – where the sexualized and engendered role is wrapped in candy-sweetness and tailor-made for under-13 adulation.

The body of color, in this sense, is found in Snow White’s domestic marginalization – here is a “princess” stripped of prestige, made to scrub floors and dust chimneys, cook and smile. This domestic servitude echoes the kind of migratory traffic that comes from the Philippines: that of the house help, the service staff, the nanny, the nurse and the hospice caregiver. Brown bodies tasked to provide for the comfort of others. These themes are tangible in the lines of care and platitude mouthed by Jocson and Ligtas throughout Princess: “Why are you sad? Have you lost your parents?”

Though the least “provocative” of Jocson’s pieces, Princess is actually the most confrontational. It gives you “white face”: an abstract, almost absurd counterpoint to the more rampant yellow-face or black-face phenomena. Never really read as “white face” because white-facing is too familiar and almost invisible in its ubiquity. It is present in every colonial complex inherited by former colonies and manifested in the amount of whitening creams and hair-straightening products on the shelves of supermarkets. We have ingested the idea that white is beautiful, desirable, aspirational – the sacred body with skin white as snow.

Not in this constellation. Snow White is never white (the second impossibility). She only is in Disneyland.

[1] Austronesian language spoken as a first language by a quarter of the population of the Philippines.
[2] PG (Parental Guidance) – used to certify that a motion picture is of such a nature that all ages may be allowed admission but parental guidance is advised.

Born in Cebu City, Philippines, Stephanie Misa is an artist, curator and researcher. She lives and works in Vienna where she graduated from the Academy of Fine Arts Vienna, and is currently a doctoral researcher at the University of Arts in Helsinki. Her work consistently displays an interest in complex and diverse personal and socio-political histories, relating to these through her video work, sculptures, installations, prints, writing and curatorial practice. stephaniemisa.com

The Disney imperium made Snow White the epitome of the happy girl in films and leisure parks. Audiences...