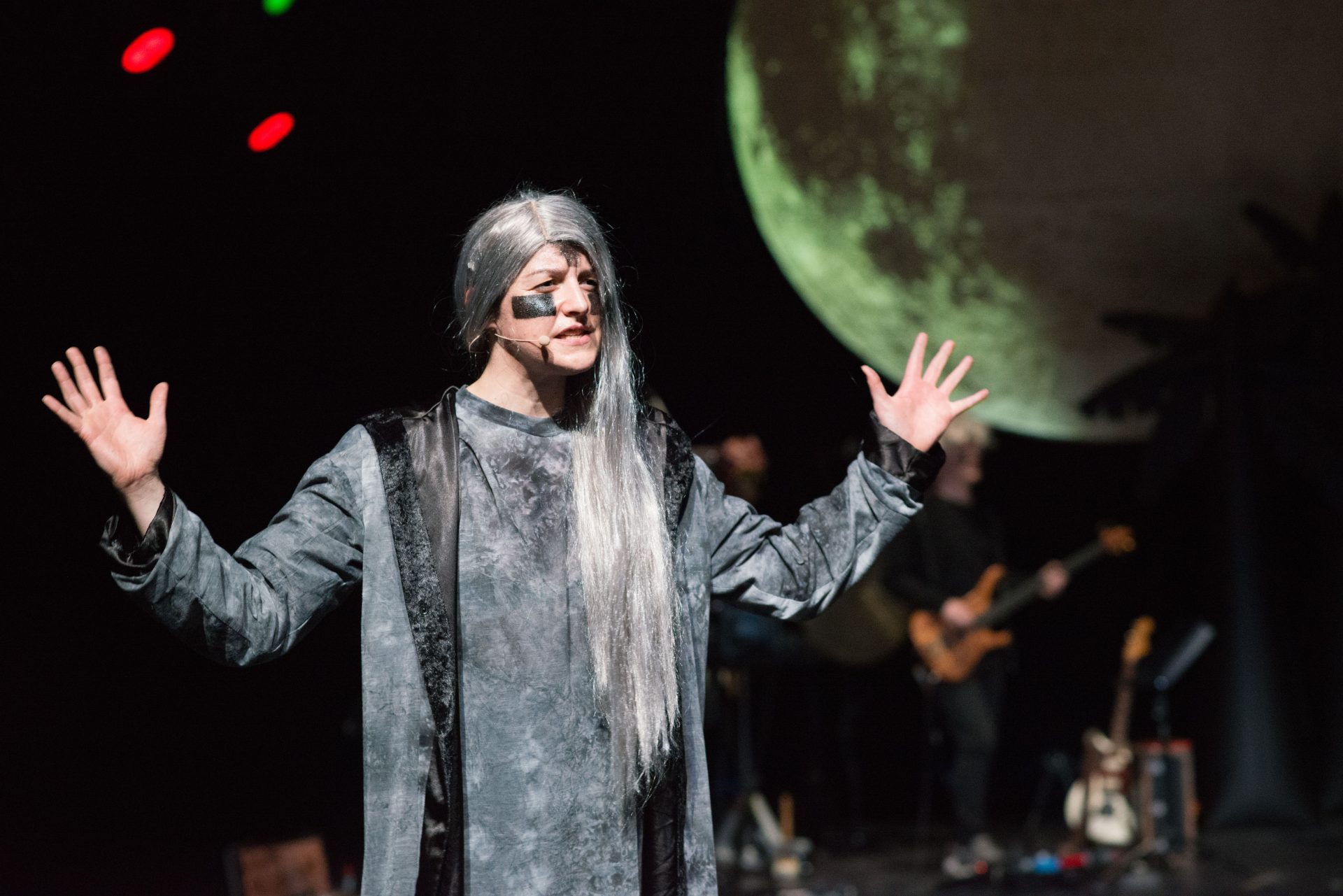 Buddha would tell her to simply ride her bike.

However, the performer Eleanor Bauer takes her computer and writes down the inner monologue.

The year of 2013 also saw the publication of Dave Egger’s global bestseller “The Circle”, a novel lacking depth and which seems like an untalented attempt at rewriting George Orwell’s “1984”. This novel depicts a world in which the eponymous company “The Circle” collects data on everyone. The one who refuses to be “transparent“ and does not publicly share every minute of his daily activities online makes himself suspicious.

The year is 2018 and Dave Egger’s dystopia has nearly become reality. And Eleanor’s bicycle thoughts have found their way into the first scene of her performance Meyoucycle. If pronounced in a sloppy manner, “Meyoucycle” sounds like “Musical”. This deliberate, mildly entertaining pun would be tagged #dadjoke and would not be incredibly successful in accumulating likes. This is what Eleanor Bauer was attracted to – to be awarded funding despite a daft title. Quod erat demonstrandum. But why does it exactly have to be a musical? “There was a time when I really got angry at the performance scene and I thought – fuck it – I will go to Broadway and I will perform the same performance every night and, then, I will go home”, Eleanor Bauer tells me. However, this idea was scrapped, instead Eleanor Bauer began to envision her own musical genre together with musician Chris Peck.

In Meyoucycle, a group of people voluntarily chooses to go into analogue exile. They resent the internet, which is full of opinions and lacks information, which makes every user perform his perfected online-persona, which might potentially hide a company’s “generous support” behind every post and which only guarantees real freedom of speech if you shut up. To get away from this digital totalitarianism, an island serves as the desired location to which the “emotional hackers” and “poetic terrorists” retreat to. Beneath a clear blue sky, surrounded by “plastic” palm trees swaying in the wind and in front of a full moon, the escapists enjoy the comfort of being unheard, of only sharing their emotions and experiences among themselves and translating them into music and choreography.

At a time when all data is being tracked and monetarised, this absolute retreat to privacy also means the renunciation of capitalism per se. Social withdrawal as a type of protest is also an essential technique US-American philosopher and “lifestyle anarchist”[1] Hakim Bey propagates, and who is being referenced in Eleanour Bauer’s Meyoucycle. Bey also coined the term “poetic terrorism”[2] (a term only recently misused by fashion magazine Hypebeast[3] for a Balenciaga editorial). In his book, he introduces the idea of creating “temporary autonomous zones” in which all structures should be torn down to enable unrestrained creative output.

This unrestrained creative output Bey talked about can be felt during the initiation ceremony performed on stage of the “Theatre of Nowhere” by the “emotional hackers” and ‘poetic terrorists’ and their three-member band. There is the sound of tango and gospel music as well as references to musical hits like Chicago and Grease. But even this analogue constellation, which is trying to save the world, faces corruption: the anarchic island performance gradually turns into a publicity event. “Free your flesh from names. Keep your identity in your purse! Let us all be one!”, Eleanor Bauer proclaims just like a televangelist. These lines are appealing, especially, since Gaël Santisteva’s powerful performance of a kitsch ballad reminded us of how good it must feel to be entirely “powerless”. But two hours of digital detox, of phones turned to flight mode during the performance, might just be enough for most audience members. At least, for now.

Magdalena Hiller studied business and cultural law in Vienna, Graz and Tokyo. From 2011 to 2015, she wrote reviews about the Austrian theatre scene for her Blog Vierte Wand.

It’s so nice to be powerless 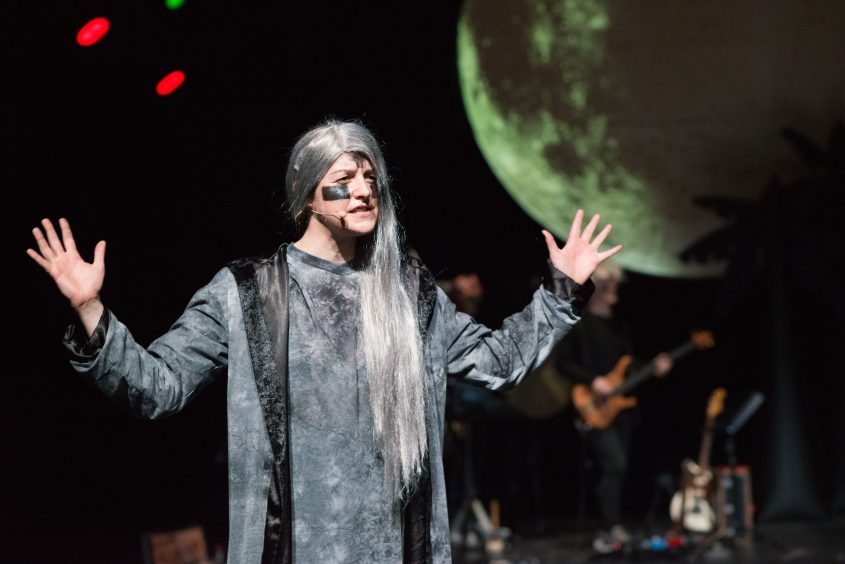 Buddha would tell her to simply ride her bike... 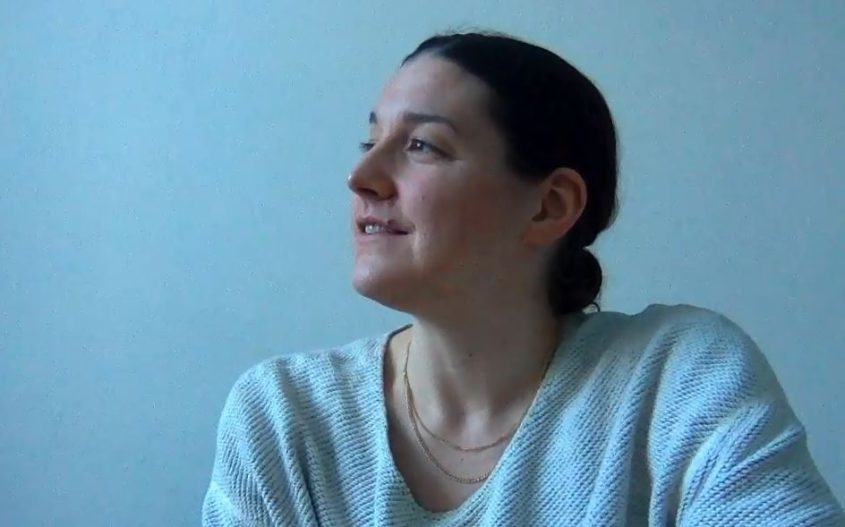 “We should read the songs like tea leaves.“ Eleanor Bauer on the interplay between dance, music and songwriting...