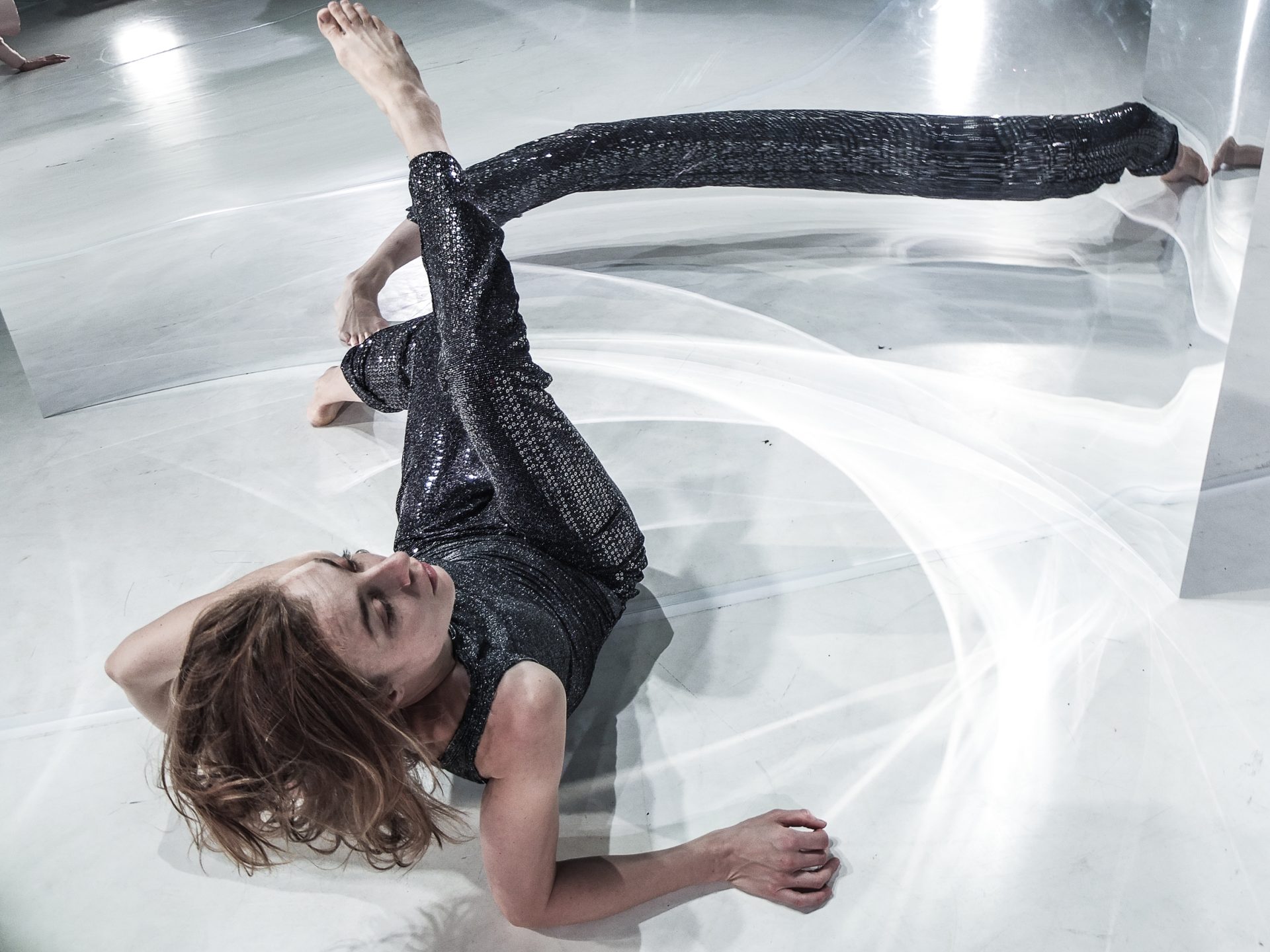 Claudia Slanar on Stranger Than Paradise by Liquid Loft

Taking the performance situation into account when contemplating the performative arts isn’t really an option these days. Premieres online instead of onstage, pieces on the screen, watching on the computer. After almost a year of “practice”, a democratisation among participants in online conversations can be achieved, provided the tools are configured accordingly. The psychological barrier to ask questions is easier to overcome; people tend to have fewer qualms about writing in a chat compared to shouting at the stage from an auditorium. And, apparently, it’s also easier to express praise and thanks that way. Of course, all of this is at the expense of actually being “present”: of seeing and hearing the dancers’ bodies, of feeling, smelling, hearing the other spectators’ bodies – none of this is possible.

Why this lengthy observation in the opening remarks? Stranger Than Paradise cannot begin without reporting on the conditions of its performance either. First, I see a stage, eight performers move about on it, warming up, rehearsing. The edge of the stage is visible, covered with clothes that will be changed during the piece and fabrics that will be used as part of the performance. This exterior is complemented by the recording equipment: camera, monitors, computer with editing software, sound and light mixing console. The beginning resembles an “establishing shot” in film: the scene is set, the context is established, mostly from a bird’s eye view, from above at an angle, too. After the cut, I’m genuinely closer to the action. And soon, guided by the camera and the director, I’m right in the middle of it. As I sit in front of my computer screen with good headphones – it’s dark outside – it actually feels like I’m watching a movie, all of a sudden. Which makes sense in the context of Liquid Loft’s practice of frequently conceptualising bodies as mediatised, and the act of performing as a practice defined by cinematic images, even a cinematic language. The music – the score – also adds to this effect. It establishes the atmosphere, among other things, it underlines the solos’ highlights. Through it and with it, the dancers drift into another (dream) world, are recovered again in the end and finally, after the music has stopped, they are left surprised, confused, perplexed and are released back into – well, where to exactly? Off-screen? Into reality?

The interim are 40 minutes’ worth of reflections on images of the body, images of people; on loneliness, and on the possibility and, at the same time, the impossibility of approaching one another in a community. Fluid beings rather than machines or robots manifest themselves, which is underlined by a stage set made up of medium-height concave mirrors. This house of mirrors that is a blend of Deleuzian actuality and virtuality – outside of which the individual can no longer conceive of itself (or so the theory goes) – contains infinitely deep sadness and melancholy. Because the exterior, the coming together of these individuals also has the capacity for rigidity, for stagnation. There is only a (very) vague hint of becoming. This “becoming” (animal, machine, post-human?) is also associated with exertion and suffering. An echo of ubiquitous neoliberal self-optimisation is palpable but isn’t the most pressing concern. This seems to be the constellations and possibilities of communication that don’t exist yet and have to be renegotiated. The pas de deux are performed side by side. The bodies as signs (of automatonism, animalism, humanity) replicate themselves by way of their gestures, repeatedly solidifying into an image, sometimes even into eerie shadows. The most touching moments are those that approximate a connection and, for a little while, achieve harmony.

After the end of the piece, with the credits still running, I can’t help but google the music and make some surprising discoveries: Penelope Trappes’ interpretation of Nick Cave and The Birthday Party is colder than ice; a slowed-down Annie Lennox suddenly sounds like 1970s soul and then again like David Bowie. Ultimately, this draws the attention back to the fluidification of a rigid concept of identity and the not yet exhausted possibilities of becoming. Despite the melancholy, the sadness about an uncertain future, there remains a feeling of happiness, a sense of being moved, that lingers.

Claudia Slanar is an art historian and the curator of Blickle Kino in Belvedere 21. She writes about film and visual arts, sometimes about performances, and with pleasure about site-specific art.

In dance the bodies become political, at the same time the political becomes poetic. In Stranger Than Paradise...