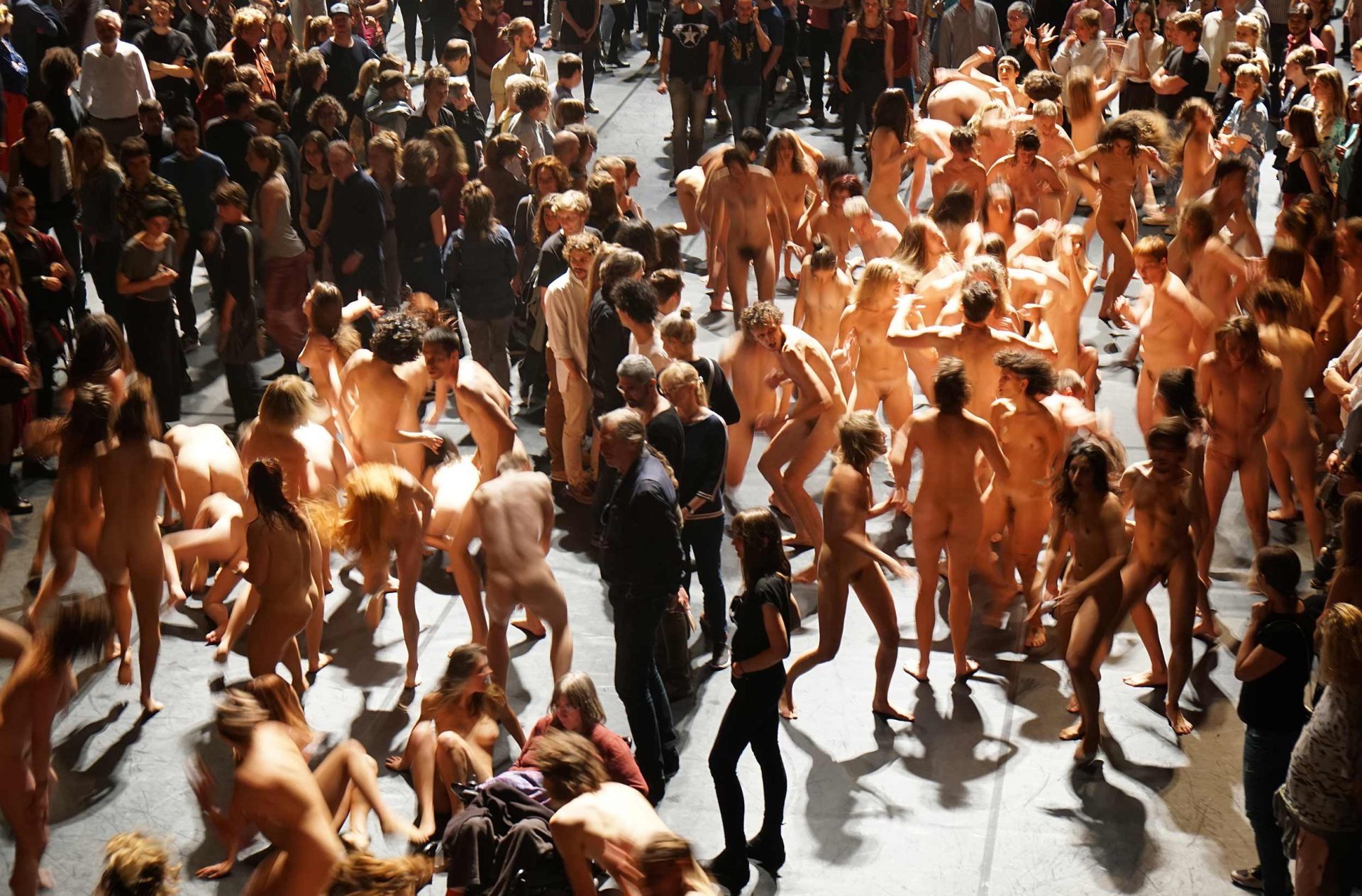 Give the picture the shoulder: the cold, lukewarm, hot, tattooed shoulder and the shoulder marked by redness, bra marks, moles and age spots. Quickly get over the sense of wonder and dissect the tribal ornament using one’s own body and its distracted attention into something that tingles, possibly crawls, fidgets, wobbles, but whose organisation of movement does not answer the question of the unity of the many.

The question of the unity of the many has always been the wrong question, both politically and aesthetically speaking. It is a question that unites us in the necessities of governance, as rulers and ruled, not in the freedom of having this or that to do with each other. Where answers to this question push into one’s feelings and one’s understanding, one needs to act as though distracted: horde, why horde? Ah, the people back there? They have only just darted along, with an intense presence, even more hellbent than a herd, the compulsive understander explains down my neck. Seriously?, the rest of me asks in an effort to gain time. I was so busy turning around. This will be my greeting to the representatives of tonight’s spectacle: sorry, I’m so busy turning around.

Better ask the question of how to grasp the relationships of the many without recourse to a rhetoric of the pictorial. How to let nudity loose (on us and the world) and yet keep it from dissolving into abstract form? This side of the ornamental moves … what?

Look with the skin. The skin is not only there to be looked at, it is one of the most important sensory organs. “It is not irrelevant, in fact, it is essential that the spectator is this person with a skin whose organic rather than cerebral sensitivity absorbs in every moment of the drama the mystery and vague alienation emanating from the wind and the stars”, Roland Barthes wrote about theatre in antiquity.[1] Whether in the open air or in the warm, musty semi-darkness of the hall, the skin introduces all those aspects of the real to the play of perceptual experience that situate the body along a side-by-side rather than a frontal arrangement of the “I’m here – that’s there” variety. And the skin is still naked even under evening wear.

Pornographic nudity prepares the skin for the eye, spreading flesh, from which the clothes have been torn off like a sticking plaster, so extensively that spectators have an optimally disparaging view from every angle. Nakedness as something from skin to skin, on the other hand, always wants to be lateral. Testing it for its specific peculiarities presses the air between us into various creatures of lust/aversion. As if a softly squeaking relational balloon were stuck there, held together by us. For example, my pelvis cooperates with a dirty, calloused heel that slides into a tuft of armpit hair. A strip of my chest follows a crouching, pumping performer further down, thrust by thrust. During good phases, the floor joins in, and the stamping shakes the naked – not only the fat of the dancers, but the open-pored, sweaty state in which we participate.

When, at some point, the performers pick up speed, begin to run around among us, the desire for direct physical contact immediately intervenes. The nakedness that fills the gap between my skin and the skin of others implodes. “Come on, shove me!”, my throbbing extremities call out, and the obvious caution with which the choreographed people find their way through the crowd is annoying because it frustrates the desire for more massive, more penetrationesque proximity (for a moment, I long for the early radical actions by La Fura dels Baus, at which those who didn’t jump aside were simply slammed into).

Then there’s time again for the skin to reorganise itself from an epidermis craving haematoma into a sensorium. Time for the side-by-side, the sensitive indifference of the laterally naked.

Be less than an audience today. Accept the situation – there is no separation between the stage and the auditorium, no demarcation of an area for a guaranteed aesthetic appearance – as an invitation to curtail the claims to one’s own presence. Shed the expectantly upright (anticipating something grand) or the curiously bent forward in favour of lounging limp-hipped and slack-jointed, wandering about or lingering. Do not consider the laughing and talking of two people in the vicinity a disruption to the performance. Instead of hissing an admonition, feel good-naturedly what the laughter, the chatting does to the dance, the beat and the music’s pulse, to the lumps and dispersals of the naked people.

For once, do not deduct from the abundant mass being present that which makes me an individual by virtue of subtraction. Although the bourgeois habituation to art makes this very difficult, try to refrain from wanting to get something unique out of the performance through the subjectivity of my own experience – something whose value lies in not having escaped ME. Instead, let the mass we form itself collapse in a minus mass. Decimate the impressions-gathering WE within the I. Assume that it will suffice if a few others of us notice this. Do not take tendencies towards a sports day too seriously. Blink boxes away. More generally, spare those on top the emotional loyalty, to a certain degree, and chuckle about the fidgeting on the steps. This prevents the blessed firmament – the architectural legacy inherent in almost all halls – from crashing onto the heads of those up there.

Explore the vital from the edges of sleep. The twenty minutes during which the performers are resting may seem like an intermission to those who have come and stayed to watch something as an audience. One agrees to the time of rest or waits impatiently for them to wake up. But what if the piece’s period of rest was like the key phrase in a text containing a crucial hint to making sense of it?

Read or re-read “Vibrant Matter”. A book by political scientist Jane Bennett, which so far has had more impact on contemporary dance than on politics – but with a bit of persistence, some of the shifts that Bennett encourages could be spread among people through dancing, and upwards of a certain number of people, things do get political.[2]

Go outside and, when outside, walk in such a way that the city continues to adjust the naked people, distributing their deliberate randomness among the crowd, dedicating the greatly deserved ovations to the stream of unsuspecting passers-by.

Or have perceived everything in light of an UP TO NOW. Instead of hoping that Habitat might offer a utopian glimpse into a more open approach to nakedness, a physical emancipation – after art (when exactly was that?) has appropriated hope – view this performance as reminiscent of the great conventions of choreography, which only just work in contemporary dance these days but whose social correlates are already breaking away in the present: the arranging into groups that match geometrical figures and set-theory blobs, coming across as their embodiment; the staging of interactions; the making use of mutual imitation and synchronisation for the implementation of choreographic ideas; the juxtaposition of “scenes” as choreography commanding time, the grid and the systolic-diastolic as choreography commanding space. Anyone who goes to a club from time to time knows that dance can do without this. Anyone who moves through city traffic on a daily basis, with or without headphones, participates in an organisationally more intricate collectivity.

And UP TO NOW also with reference to the material, living body. After all, isn’t it likely that these choreographic methods of shaping movement will soon lack the biological equivalents as well? Just as the life form (we will get used to terms like holobiont and will use “human” with an ironic smile) develops by adapting to the organisational realities of living together as many, there are realistic chances that we will outgrow being choreographed by moving towards being differently-oriented, differently-separated and differently-reassembled. If bodies become more sympoietic, more tentacular[3], they may be able to manage their nakedness better than those who pictorialise it today. It’s possible that the choreographic will develop accordingly and that choreography in fifty years’ time will denote a set of collective techniques in which the social and the aesthetic mutually determine each other in a much more vehement manner. Perhaps art will even lead the way and end the tradition of painting or sculpting movements at its own discretion, before evolution forces it to do so.

Kai van Eikels is a philosopher, theatre and literary scholar. He currently teaches at the Ruhr-Universität Bochum’s Institute of Theatre Studies. His research interests include anarchic, self-organised forms of collectivity; art and work; the politics of the performative; synchronisation, time and materiality. Theory blog: https://kunstdeskollektiven.wordpress.com

Habitat transcends conventional ideas of the body, of dance and of nakedness in a subversive manner. Habitat is a utopia. A shameless but also a free-of-shame hymn to a naked body beyond cultural inscriptions and conventional ideals of beauty...

Following the performance, Halle E transforms into a dancefloor with DJ sets by Doris Uhlich and Boris Kopeinig... 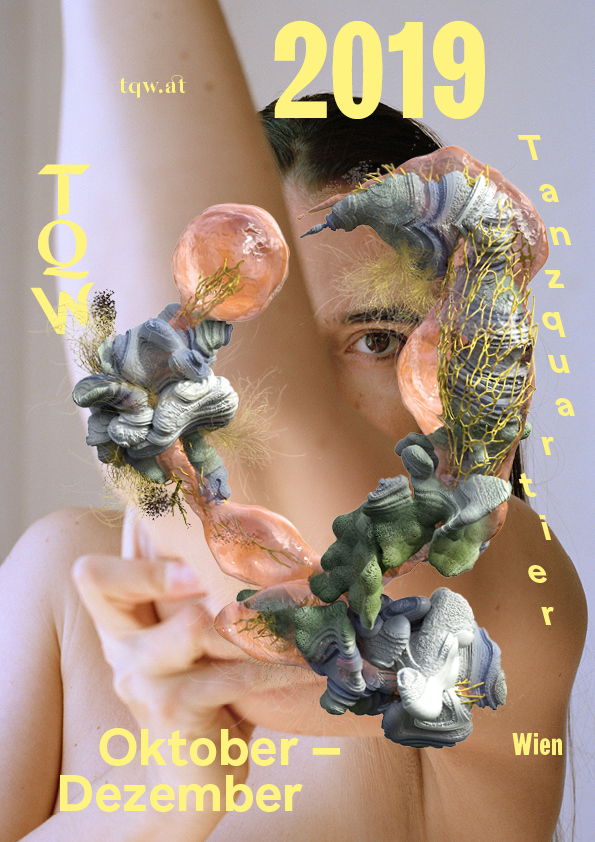 Dear audience, dear artists, we are excited and thrilled to welcome the 2019/2020 season at Tanzquartier Wien! The...