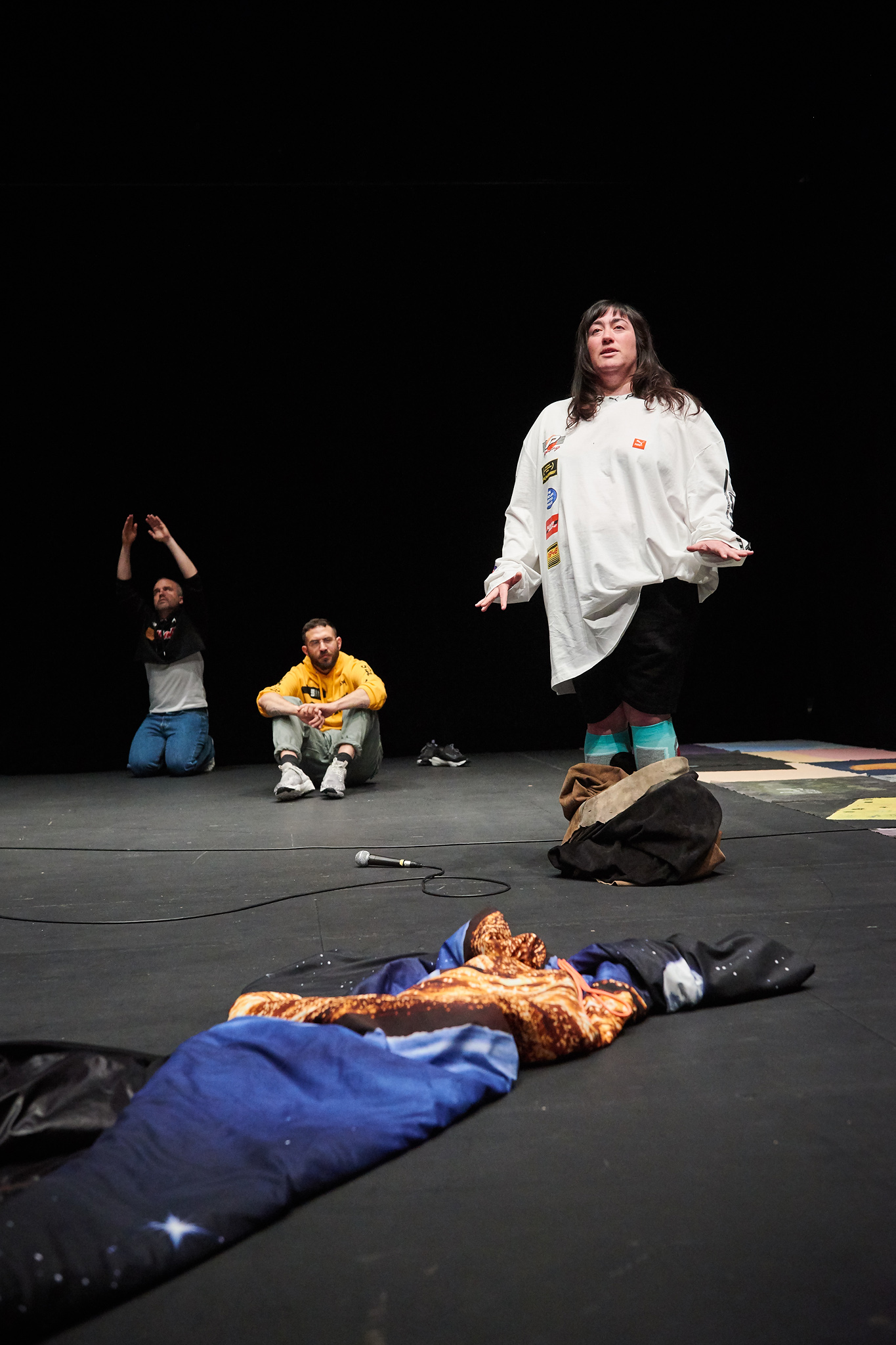 Can you free yourself from the past, even if it is as disturbing and brutal as Eddy Bellegueule’s upbringing in rural northern France? Eddy Bellegueule does not exist anymore. He is now called Édouard Louis and he is the narrator of the autobiographical novel “The End of Eddy”. It tells the story of a bleak childhood and of the apparent impossibilty of being different. The role one has to take on has been clearly defined: women have babies and become cashiers, men work in the regional factory and get pissed on Pastis. They are all entrapped by a social class system. The power of the social background and its haunting memories constitute the prison from which you need to escape – Édouard Louis’ story is about trauma and emotional processing. But it also serves as a source of inspiration for Philipp Gehmacher’s, Jen Rosenblit’s and Gérald Kudian’s own biographical reflections.

Memories are fragile, delicate and unreliable. Memories need safeguarding, discretion and doubt, because they are easily manipulated. Which memories do I recall? Which do you? And how do they form? Are they composed of fragments and excerpts which I can freely choose from? Which I can layer and piece together according to my own liking, thus fabricating my own biography? But maybe a memory needs some sort of interpretation, some subconscious arrangement of the event material in order to be formed? Memories are as opaque and delicate as the tissue paper used for Astrid Wagner’s memory-paintings. The mind palace is dedicated to Philipp Gehmacher’s, Jen Rosenblit’s and Gérald Kurdian’s memories. Its doors are open to us. Pieces of a puzzle spread out in front of us, each piece connected to a memory, and every geometric form connected to even more memories. An archive from which I may randomly choose?

It stores: the fragrance of a Michael Kors perfume, a 100 ASA 35mm and 36-exposure film (perfect for hot summer days in France), a Mozartkugel (from Salzburg), a bag of popcorn (for being on the couch and in front of the TV), the reaction of Philipp Gehmacher’s parents after they had seen his first performance: “I was out of reach for them”, Gérald Kurdian’s recollection of his mother: “She performed the non-immigrant”.

Remembrance as a search process in which there are multi-layered, interlinked and intersecting story lines. The three biographies represent the multitude, but singular biographies eventually add up to one final story. Thus, the past appears to be ever changing. The present always constitutes the past. We use memories to affirm the present, to create something unheard of or reflect on our point of view. Remembrance is an act of self-assurance, it creates identity. But can we really overcome the past? To what extent am I entrapped by my own memory’s images, my own biographical shell?

“Who is your father, Darth Vader?”

How can I not be my parents’ child?

“I still have not figured out how to

be my mother’s daughter.”

With hesitant, tarrying and stuttering movements, Philipp Gehmacher finally takes off, even shakes off, the blanket he had wrapped around himself. We are watching a body trying to find its balance – perhaps even trying to find its identity? We need to ask ourselves: does the process of creating identity not represent a balancing act between interior and exterior, you and me, looking and being looked at?

For one part, you are on your own:

“There is no shame in reaching to yourself.”

For the other part, you are part of a collective:

“Who are we to each other?”

Your story is always my story too.

Jette Büchsenschütz studied sinology in Hangzhou (China) and dance studies in Berlin. After staying for several months in China, she went on to work as assistant director at a number of theatres in Berlin. Her master thesis is concerned with speculative realism and the performative momentum of things in the field of dance and performance.

It is a balancing act to live without your attention

The process and the performative aspect in working on the fragmented, multi-body self of a joint text emerging...