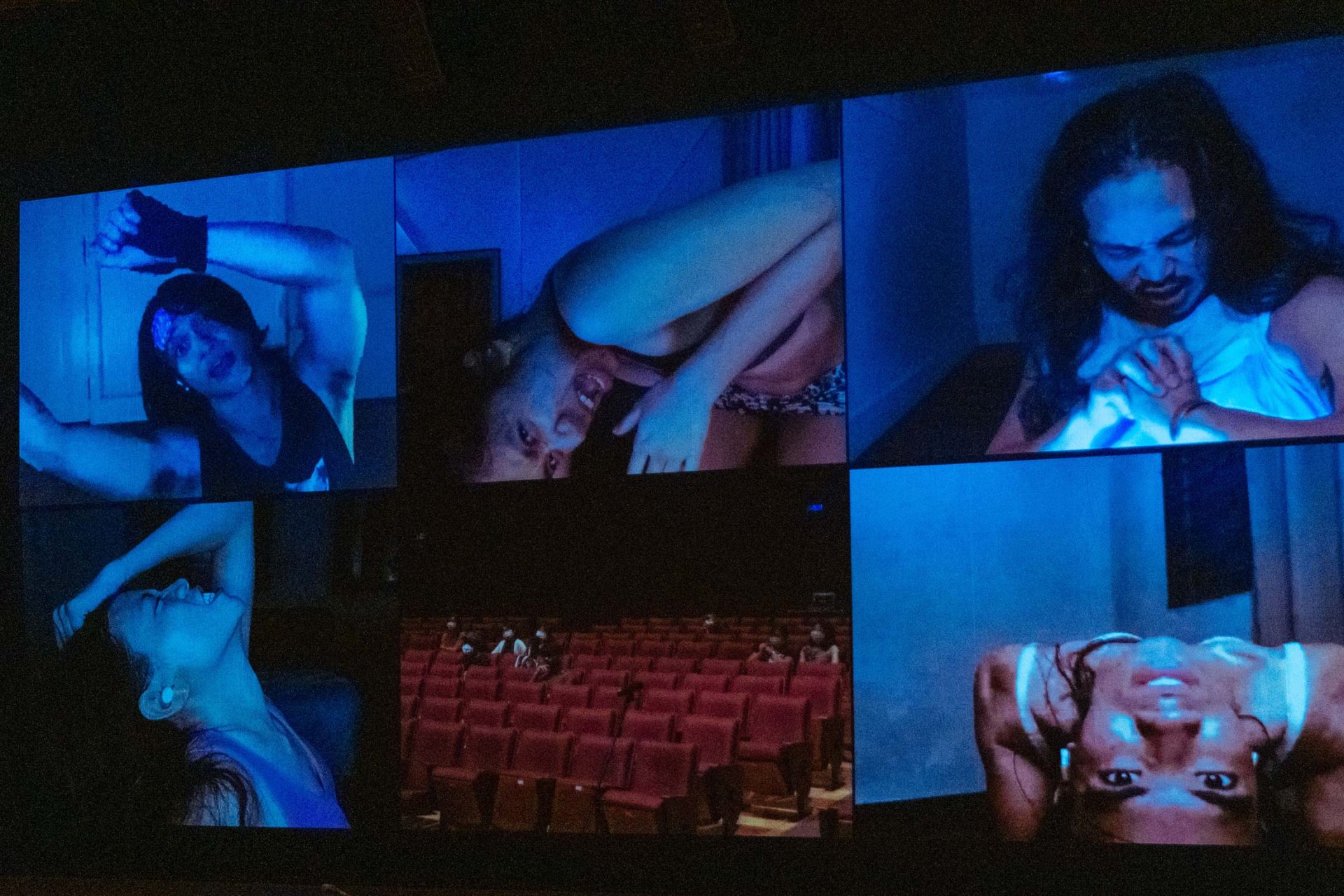 In Manila Zoo, the final part of her HAPPYLAND series, Eisa Jocson continues her exploration of Walt Disney’s empire of happiness. The Austrian premiere was planned for April 23 and had to be postponed due to the Covid-19 pandemic. Mika Maruyama met her online to talk about the genesis of the performance.

Mika Maruyama: How do you approach the politics of the Filipino body and the production of happiness in Manila Zoo, the third part of the series HAPPYLAND?

Eisa Jocson: HAPPYLAND is situated in the context of Filipino labor, the performance of happiness and the production of fantasy within Disney’s happiness empire. Highly skilled Filipino entertainers are hired as anonymous background performers to fill in spaces in any scenography; a zebra in “The Lion King”, a monkey in “Tarzan”, or fiesta performers at the parade. Trained by a culture of constant crisis, Filipinos are world-class shape-shifters. The starting point of the third part of HAPPYLAND, Manila Zoo, is the labor of spectacle produced by Filipino bodies employed in Disney parks. Then the performance turns the focus on quarantined humans in pandemic lockdown. The piece is mediated through the new normal of the virtual frame and depicts multiple systems of enclosures that humans have made for themselves and other species. Both Disney parks and zoos are cultural and spatial monuments to how we have displaced and continue to marginalize and control the bodies of other animals. Our urban living conditions resemble animal enclosures in zoos. Being in lockdown, we catch a momentary glimpse of a life in captivity.

Even though Manila Zoo takes place in virtual frames, our performance is streamed live from each performer’s room to a physical theater. This means that the time difference between Manila and Europe has become an important factor concerning the politics of labor. The earliest starting time we managed to negotiate for European venues was 6 p.m. local time, which is midnight in Manila. This means that the working hours and conditions of our show are the same as at call centers in the Philippines, and three of the Manila Zoo performers even had experience in working as call center agents. This triggered our discussion on how Filipino labor is made to cater to other people’s natural circadian rhythm while discounting our own, as if we were mere automatons. In Manila Zoo, we push the performance of service, spectacle, and stereotypic behavior to an extreme as a way to purge, overflow and shatter systems of confinement, starting with our bodies, in our rooms and virtual frames.

Repetitiveness has been an essential aspect in the previous works of HAPPYLAND, and you also employ the repetition of animal movement and human exercise in Manila Zoo. How do you use repetitive movement as a way to demonstrate different politics of the body?

Repetition is integral to educating and disciplining the body/bodies. How, where and why a body moves is limited and conditioned by its context. Being Filipino is central to my work, and it’s about the servicing body and affective labor. Years of Western imperialism and neo-imperialism have molded a Filipino workforce ready for the global market. Its need to systematize and control bodies permeates everything from borders to labor to other animal species. Even before the pandemic, most of the urban population lived and functioned under alienating disciplinary constraints. The pandemic has intensified our isolation in the individual cells of our homes, much like animals in the zoo. In a confined space, repetitive motions and exercises become critical for survival both for humans and animals, for example the treadmill and the hamster wheel. Animals in captivity exhibit zoochosis or stereotypic behavior, and the movements they make are described as an invariant, repetitive behavior pattern with no apparent goal or function. Like animals in captivity, we humans suffer from stress and depression and display similar unusual behaviors in isolation.

In Manila Zoo, human exercise and stereotypic animal behavior are interwoven with vocabularies of service and spectacle, driving the human body into a state of madness and monstrosity, something that escapes understanding.

Manila Zoo has been transformed many times due to the pandemic, and you have experimented with virtual forms in different contexts. How do you approach this situation of ‘migrating to the online world’?

I find that mechanisms of control and alienation, which are at the core of Manila Zoo, have markedly intensified during the pandemic, forcing everyone (who is privileged enough) to migrate online. It made complete sense to adapt Manila Zoo and develop it in this new location of virtual enclosures. It is challenging but at the same time exciting to observe, reflect and create under new conditions as they unfold. Also, we Filipinos adapt – no matter what.

We first explored live streaming our performance to an exhibition space between May and September 2020 for the durational performance-research Zoo (for Manila Zoo), commissioned by the Tai Kwun Contemporary Art Museum in Hong Kong. There was always one performer streaming live from Manila, appearing on a flat screen in the exhibition space, performing from opening to closing of the museum. Once the audiences in the museum understood that the stream was live and two-way, they interacted with the performer on the screen in ways that we didn’t expect. We then worked on live streaming our performance to theater spaces for work-in-progress showings of Manila Zoo in Taipei and Yokohama with a bigger screen. The piece took on a cinematic quality. What we lost in presence, we gained in scale.

The work is online to a certain extent, with the performers and the video tech team working remote, but the audience can only access it if they are physically present in the museum or in the theater. I believe in the power of collective spectatorship in these spaces. There is too much distraction on the Internet.

In your practice, you have emphasized the politics of the gaze and of spectacle. How do you perceive the audience in this piece?

In Manila Zoo, the premise of spectator and spectacle is created and staged in a field of tension between the dynamics of video meeting platforms and the theater. The screen becomes the latest kind of enclosure: both performers and spectators are framed by and watched on it. This virtual situation is difficult for any live performer. Our live performance is turned into code and we appear on a flat surface as projected pixels. Each of us performs in their room and simultaneously appears in a unified virtual space. It’s a warped perception; the audience is imagined until they get to appear inside a virtual cell alongside our performers’ cells. The work is spatially choreographed in the physical reality of each performer’s room but mediated by a camera to create a visual choreography. Manila Zoo comes full circle when the audience becomes involved and is integrated into the piece.

During the development process, you included a live performance on stage but you dropped this idea in the final version. What made you decide to focus only on the livestream performance in the theater?

In mid-2020, I naively assumed that the pandemic would be over before 2021 and we entertained the idea of a hybrid work; some of the Filipino performers would be virtual and others live on stage. In preparation for this, we tried different strategies with a local performer during the creation process in Frankfurt and Yokohama before deciding on the final livestream form in a theater. One plan was to hire and train a local ‘avatar’ to embody Filipino labor on stage. But we sensed that once a live avatar was on stage, we in the virtual space would get invalidated. The virtual performance cannot insist on its politics if it has outsourced the labor of liveness to a local avatar. Another idea was that the local live performer would take on the role of a human expert who would narrate our virtual performance. This solved the issue of translation in Yokohama but removed the ambiguous dimensions of the work. I am aware of the apprehension of theater programmers towards pieces without a live presence on stage. But after more than a year of varying degrees of pandemic isolation it’s not easy to snap back to the old normal. Our attitude towards other live bodies has been changed and will continue to be regulated. Liveness is both feared and desired; bodies as potential virus carriers vs. our need for live human connection. Relaxed lockdown restrictions in one country will not apply for others. Manila has been under constant lockdown since the start of the pandemic, and live streaming our performance is a way to acknowledge the current reality and limitations of living in Manila. This is Manila Zoo. For us, it’s more than a show, it has become a shared space of release, refuge, reflection, care, creation, friendship and radical continuation. It has been something constant during a time of instability. The work is rooted in our daily experiences in lockdown, dealing with personal and collective struggles under an incompetent, corrupt, violent and opportunistic government. We created a space in the virtual world and in our bodies to become chimeric, monstrous…unfathomable. Paradoxically, Manila Zoo has become a sanctuary, a space to reflect and transform our rage and grief into a creative force.

Mika Maruyama, born in Japan, is a writer, curator and researcher based in Vienna and Tokyo. She has written reviews and articles for art magazines and artist’s books, including Flash Art, Camera Austria, Bijutsu Techo and Artscape. She is currently a doctoral student at the Academy of Fine Arts Vienna.

+++ Performance postponed +++ In Manila Zoo, the final part of her HAPPYLAND series, Eisa Jocson continues her...