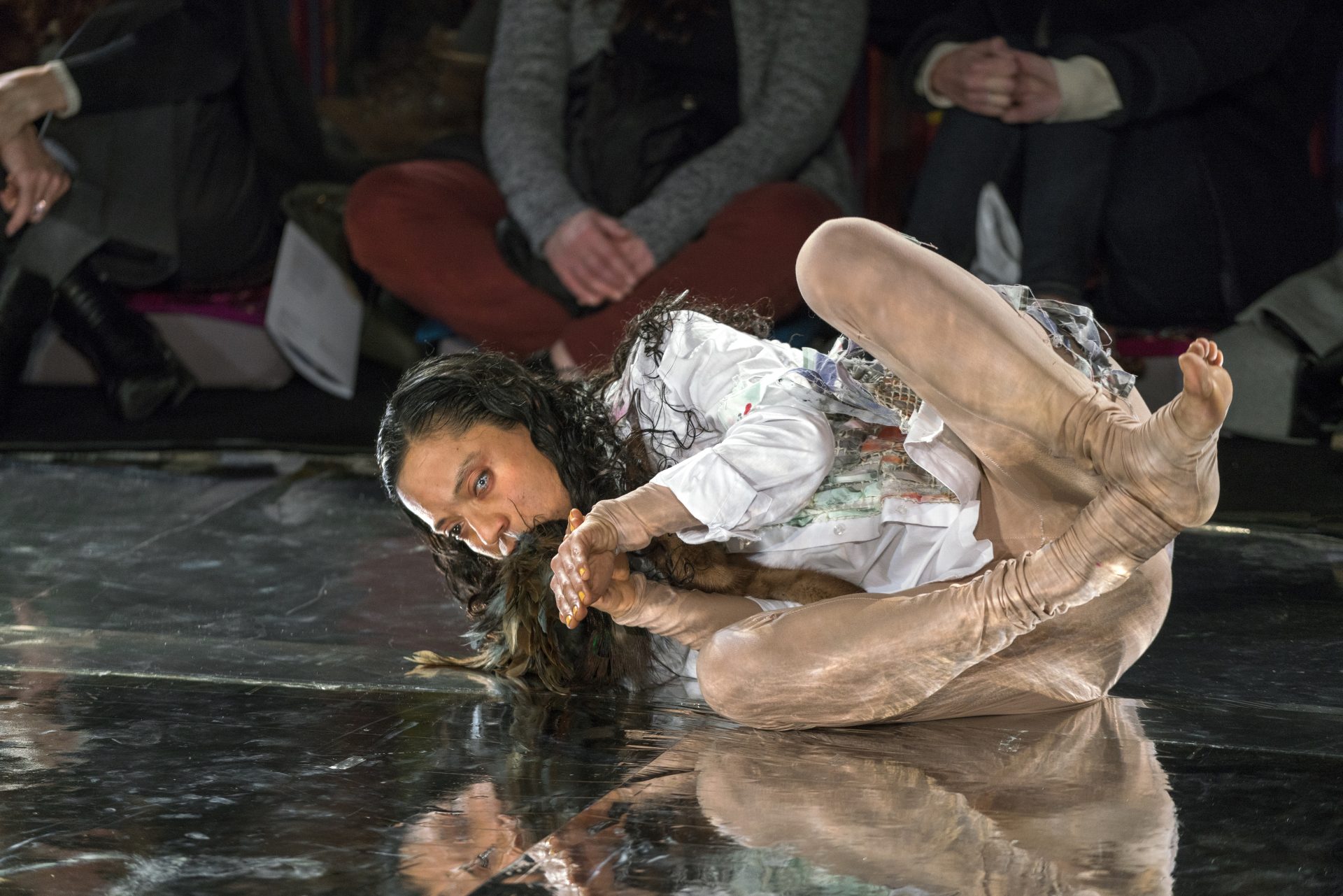 Animal bodies are staring at us from within the infinite depth of the mirror, we witness bodies in the mode of listening; listening to the elders, the wise teachers, the animals. We are at the “School of the Jaguar” of Amanda Piña’s long-term project “Endangered Human Movements”. Here, the animal is embodied as the elder, the ancestor, not as the other of the person, nor solely as a companion species. This precedential[2] animality calls on us to re-member who we are. The dance of The Jaguar and the Snake offers us the possibility of exiting our subjectivity as spectators, it offers us the possibility of entering a memorial and plural self, to become testimonial subjects, borrowing the term from Rana Hamadeh[3], and to envisage the possibility of not being one. Are we capable of listening to the multiplication of the person that the epistemology and aesthesis of the Wixáritari teach us, can we listen to shamanism as “a practice in not being one”[4]? Can we listen to this knowledge and aesthesis not as a mythical belief but as holding the possibility of exiting our confinement in the amnesic superficiality of modern individuality? Can we unlearn our being spectators in the modern world of representation and its world artifice? Re-membering, religating our earth-bodies, our animal-bodies, our ancestral-bodies opens a path outside our amnesic condition as individuals, as consumers, as spectators. It opens a horizon beyond the superficiality of immanence. Listening[5], we begin to sense what has happened to us in our unbecoming plural, our unrooting, our dis-memory, our dis-membering, our turning into orphans of the Earth.

The animal movements re-emerge in their deep temporality from the other side of the colonial difference that was first guarded by the “pose of the conquistador” and continues to be upkept by the temporal normativity of contemporaneity. Studying the Spanish dance treatise by Juan de Esquivel Navarro from 1642, Nicole Haitzinger typifies the “pose of the conquistador” as the pose of the sovereign self. This pose functioned as the norm, as the base position of Western dance in the colonial period. Haitzinger shows how the sovereign position manifests itself in its stability and “propensity to violence”, in its “(target-)oriented gaze”, and its appearance as “empty of feeling”.[6] The “pose of the conquistador”, as the performance of the sovereign subject, can be understood as an “ideal type”, one that sets the ground for today’s modern consumer subject, that is, a subject that has to invest himself in performing the sovereignty of the self, of individuality. The model of the consumer is that of an individual performing a “unique” identity and exercising his power, his dreams, and his pleasures under conditions of indolence, that is, “empty of feeling” for the exploitation and destitution of others and the wasting away of the body of Earth. The consumer, the sovereign individual, is confined to live on the surface of contemporaneity, in the now of representation. For him the universe of the real, the field of experience is reduced to the superficiality of the now, the empty time of modernity.

In the The Jaguar and the Snake, the disposition of the body is not a choreography of poses that represent animals, in it movement appears as precedential verbality, dance as re-membrance, as a re-emergence with earth beings[7], our elders. The notion of movement as representation in space is superseded by the body as a verbality, by the embodiment of time, by a memorial body that flares into the deep present.

“Movement”, says Amanda Piña, “is emergent, and ‘it does’ the mover […]. [It] is not an object […] ‘movement does me’ the dancer is moved, executed by the movement […], modified by the movement in tone, sensation and perception.”[8]

Here, movement is a practicing of memory, is the re-emergence of the memorial. Beneath the psychologisms of our individualised memories lies the radical plurality of time where memory exceeds the confines of form and representation, of the Human and the self. The mnemonic movement of the animal, our elder, ourselves cannot be circumvented by the now of contemporaneity, nor reduced to the field of abstraction. It retains its opacity as a testimony of the radical diversity of the heritages of Earth that are always already in excess of the epistemic and aesthetic territory of modernity.

Rolando Vázquez is associate professor of sociology at University College Roosevelt and affiliated researcher at the Gender Studies Department and at the Research institute for Cultural Inquiry (ICON) at the Faculty of Humanities, University of Utrecht. He has co-organised the Middelburg Decolonial Summer School together with Walter Mignolo for the last nine years. He is engaged with the movement of Decolonial Aesthesis.

In this series of lectures, we learn about the specific understanding of the body and the subject present...

The Jaguar and the Snake

The Jaguar and the Snake is a performance piece inspired by hybrid beings who populate the Amerindian oral...