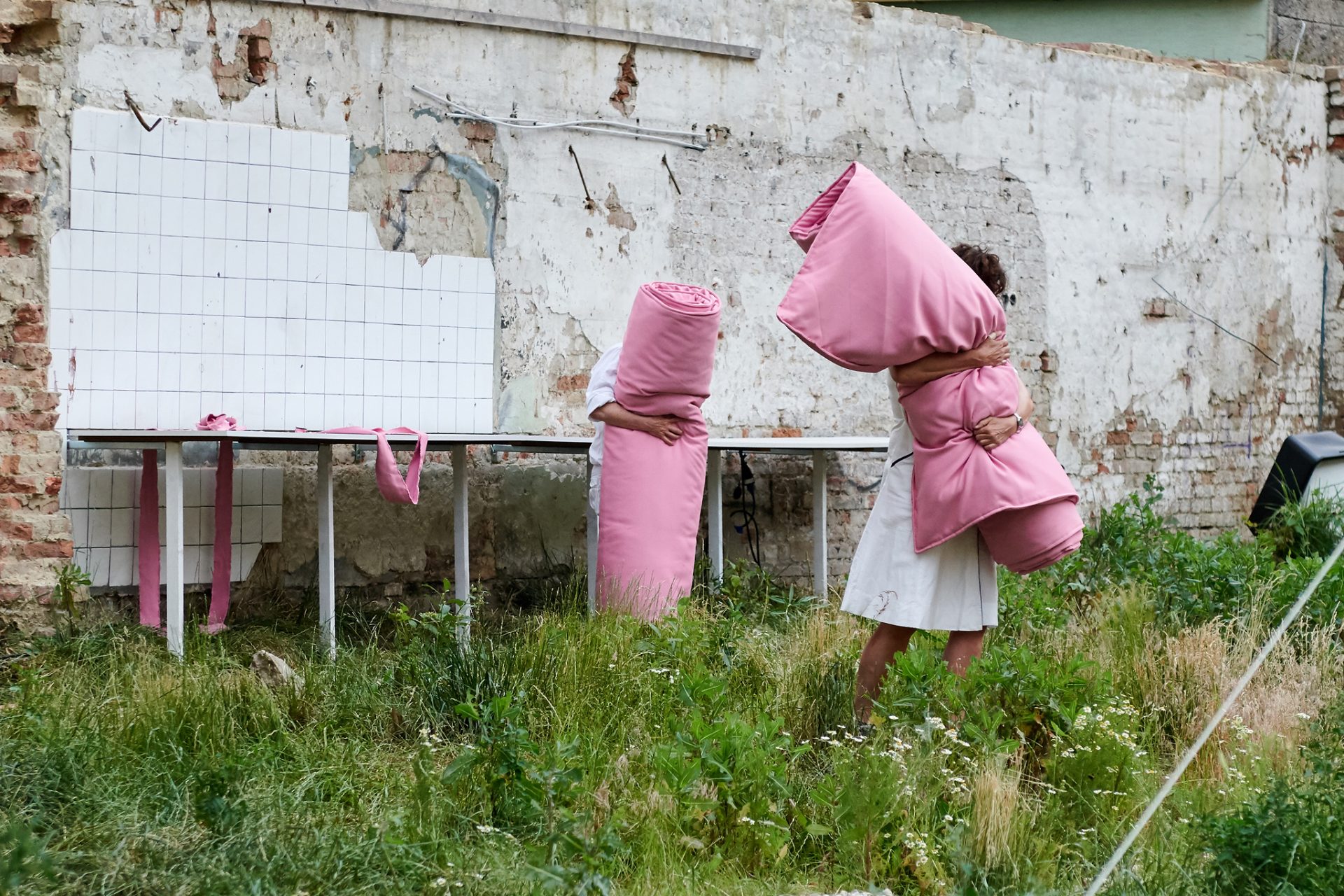 The following texts were written during the artistic lab “Talking about Writing” at Tanzquartier Wien (led by Franz Anton Cramer) thanks to the initiative of the participants. Inspired by the blog format Viereinhalb Sätze (Four Point Five), a platform for experimental writing about dance founded by journalists, authors, dramaturgs and performers, the lab participants tried to make use of one of the many formats that had been discussed during the week’s sessions. The blog’s editorial team got involved during the feedback stage and published the texts at the same time.

Mollardgasse 14 is a street corner, a vacant lot where vegetation and rubble have come to an agreement. Two people publicly perform their daily tasks within two horizontal sections that have been drawn onto the ground. A bearded man watches from across the street, the lady with the dog is on the lookout for the human subjects – oh, I see – covered in red and pink bed sheets – oh, I see – on the grass, next to the fire-resistant walls, while the photographers chase after monumental sculptures: the street, the sun. And the dog, what is he up to? Barking.

We attend a performance of being homeless for 168 hours, a minimalist archaeological site of “careful observations” and “poetic encounters”, a “live installation” lasting one week and publicly set up within the perimeters of a vacant lot by experimental theatre artist Claudia Bosse and architect Bettina Vismann as „tribute to everyday life and franz erhard walther“. An early Claudia Bosse statement taken out of context might be helpful to provide a better understanding for the mysterious events and the exhibitionistic open air (self-)experiment happening in the metropolitan borough of Mariahilf: “I am not interested in investigative theatre, I am interested in testing these sensory methods and movement techniques to relate them to something else, to not be restricted to remain a mere consumer of ostensible pre-existing conditions, a standardised thought process or a normative concept of world. You are part of and creating reality, you are responsible for your reality. This is where theatre comes into play.”

Along the perimeter of the vacant lot, on the walls of the houses next door, there are still visible traces of Mollardgasse 14’s cross section, or rather there are cement-bonded wood fiber insulating units named Heraklith. Claudia Bosse and Bettina Vismann’s 168-hour long performance, this reciprocal voyeurism, might also only exist because of the neighbouring bystanders and surroundings: “they will put all their daily acts and activities on show while at the same time observing and recording their surroundings in writing”. The fragmentary writings derived from this method of and dependence on interaction might therefore also remind us of the Greek Philosopher referenced by the insulating units. However, one cannot label the method of the two performers “dark” – as the philosopher’s practice had been called by the time of Cicero – since the status quo, the process of observation and its impact on the bodies, is under constant surveillance at night by floodlighting and a security guard. Exposed isolation, panta rhei…

It’s quiet, neither silent nor without noise, but quiet in a way that draws me in and lets me simply sit and contemplate, hear and feel, all by myself or, as is the case here, together with others. Two rectangular gravel beds, the size of two rooms, with white canopies and equipped with requisite necessaries, divide up the space of the untamed green urban wasteland and demarcate a place of attention. Two women, each enclosed by four imaginary walls, carefully observe their surroundings, type and scribble, as if they symbolized the paper-white aesthetics of writing (clothes, bed sheets, water cans, chairs…all in white): as if there was no way to tell introspection and environmental observation apart, and these converging gazes had to be revealed, had to be projected onto the walls of the surrounding buildings as blurred word-images. Both performers stick to the same daily routine, both exit the private sphere right on schedule and slip into pussy pink textile fabrics – transformed into organic movement sculptures, they adapt to the environment and either explore the space haptically or get slowly absorbed by the grass – until both performers, accompanied by a confusingly arresting birdsong, simultaneously end this “poetic encounter” and return once more to their daily routine and to the exposed sphere of privacy, while we are left with the feeling that those formations of ritualistic performativity might possibly be the rhythmic expressions of mediatised (self-)positioning. Halfway between negotiating time and accepting the given, between supposed interior and exterior, poetry and banality.

Feet are already dangling in cold water, yet sun kissed cheeks – no wonder, it’s 35 degrees Celsius, but this does not keep the neighbour from number 12 from crossing the street at five o’clock and from looking at what she had already watched earlier from her window: The two studio flats, surprisingly well equipped with bedside lamp, makeup mirror, cooking spoon and cheese grater – but who would want to eat mac and cheese in this heat? – are stripped even of the last protection, the canopies need to go. Complete insight and total exposure.

Pull-over and slip-in objects get transformed into movement sculptures, which limit the restricted movement of the sweating bodies even more and make them look like cocoons, cocoons in which the performers enjoy at least a moment’s peace. “Attempt at being a sculpture” or essay on wasteland’s creation of space through action: some or other gesture, behaviour, subtle interaction – each element only temporary part of a work never to be completed.

Two beds are situated among the neglected remains of a demolished building. The performance artists Claudia Bosse and Bettina Vismann did not make it easy for themselves: living for 168 hours in such a desolate place, in front of everyone. Whether it be sleeping, working or taking a leak. They store written texts underneath stones and observe the observers. Sack race at five pm…

Oscillating between place and non-place, attention and disregard, participation and isolation, Claudia Bosse and Bettina Vismann’s seven day, 24/7 performance is not only, as the programme posits, a “subversion by means of poetic practices” but rather a demonstration, an act of showing that the private realm is essentially a political sphere: there, even when hidden from the public eye, political and economic processes converge. The premises of this endeavour are closely connected to an entire apparatus of institutional support structures without which there would be no basis for interaction for the two performers, just as the activities of writing, living and existing, which they pursue, depend on a web of material and discursive framings. Bosse and Vismann simultaneously appear to be contemplating observers (their written observations are being projected at the end of each day at sunset) and performers, who leave their demarcated (gravel) living areas (including camp bed and an eclectic assemblage of furnishing and everyday objects) on schedule, 5pm sharp, in order to face each other silently and wrapped in various fabrics at the forum. Somehow, synchronously.

A woman screams in the car, the canopy rolled up, four photographers are ready. Those watching us from the wasteland, dressed in pink and magenta, demand bifocal attention like crawling Böcklinian stelae in mourning. Stagnant air, the sun moves on. There are less and less spectators. Loose canvas shirring like skirts

168 stunden (a tribute to everyday life and franz erhard walther)

Artist Claudia Bosse and architect Bettina Vismann will be living in an installational setting on the derelict remains... 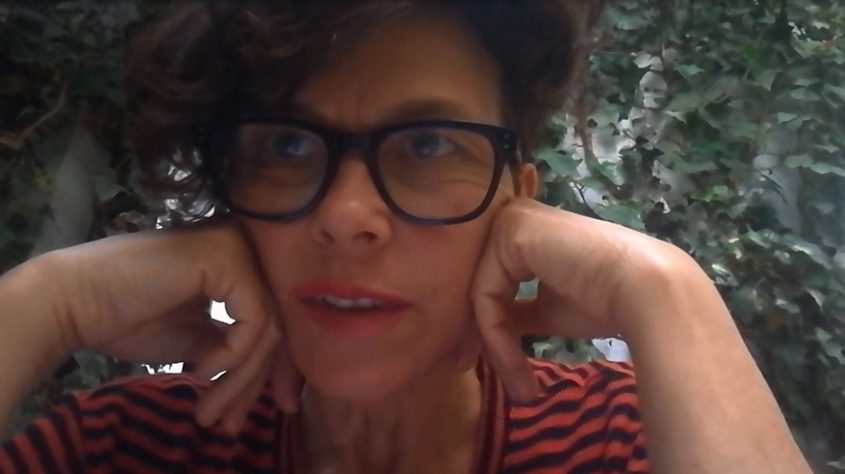