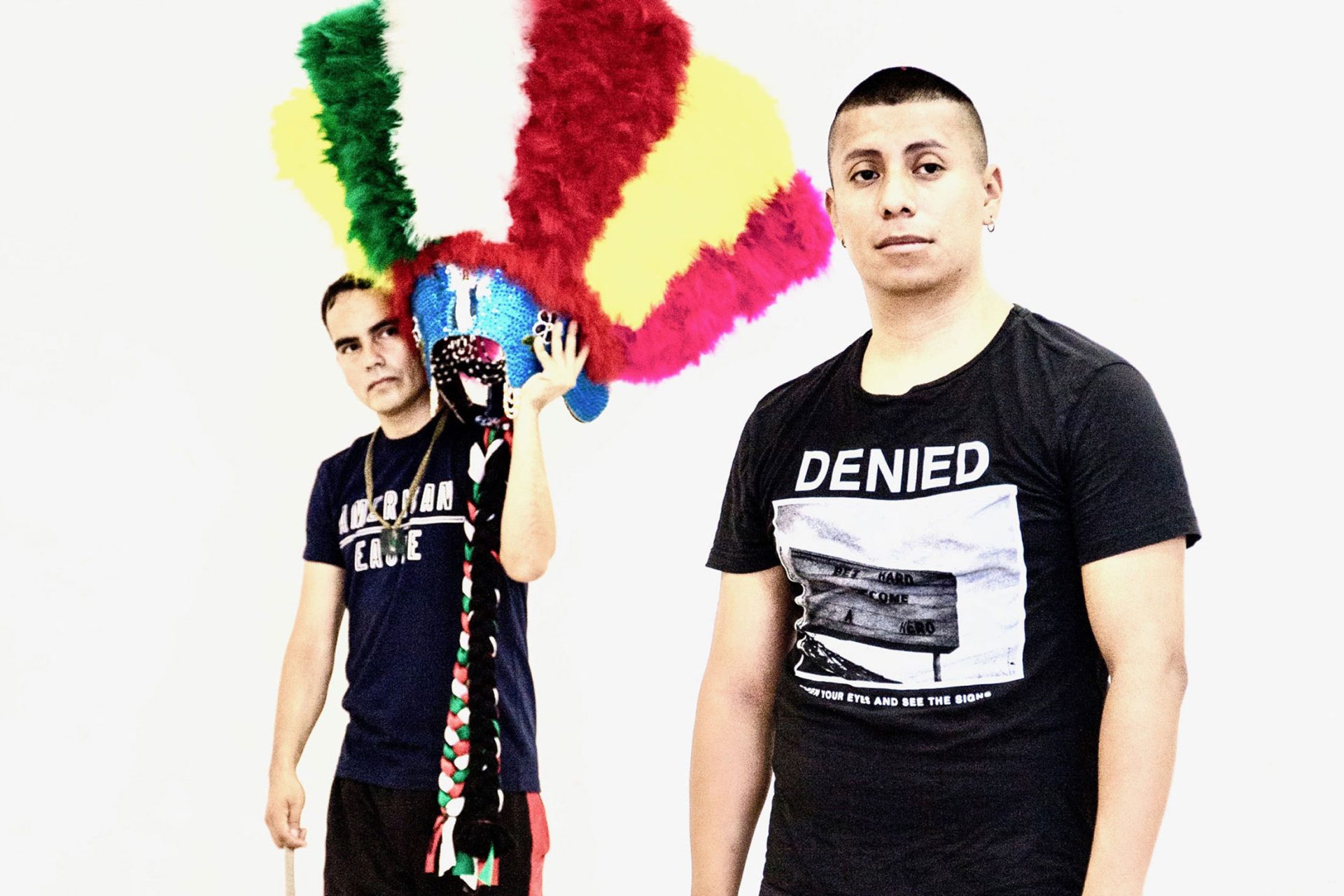 I’m in the theatre and I have time – I’m looking at bodies, bodies coming in from the street, bodies that wander, bodies moving across a surface of sand that fills the width of the stage, telling a story about the desert, bodies that drag, drop from exhaustion and die – they are real bodies, in the fiction of the theatre. They rise again, disappear, die another death.

The figures approach to evocative and haunting music by Christian Müller. It has an eerie quality to it that is reminiscent of the way zombies move. These are figures from many centuries, and into them a rhythm has inscribed itself, a dance, a dance of subjugation, of colonisation.

Outside, a group of demonstrators protesting against the current government just passed MuseumsQuartier, where the theatre is located. It’s Thursday, and a week ago, an earlier tradition of weekly protest marches in answer to the conservative/right coalition was revived. Activists mobilise against the cynicism of a government that celebrates the colonial concept of the Fortress Europe, even without an urgent cause, by way of an expensive propagandist police drill at the country’s border aiming to achieve maximum publicity. The boundary between “US” and “THEM”, the dividing line of clear separation, which postulates a nation and a national body that doesn’t really exist as such. The border that seeks to establish the dichotomy of a “hegemonic US and an inferior THEM” as questionable identity politics in a neo-colonial manner.

The people on stage constantly move their bodies towards the front, they stream, walk and vanish. In classical theatre, the front represents the so-called fourth wall, which is symbolised in this production by a thin curtain of gauze that serves as a delicate reification of that wall. It looks inconspicuous, but its importance in the given context makes it massive. It stands for a real border, in this case the one between the USA and Mexico, “frontera” in Spanish. In the theatre, the border is fictional. It would be easy to tear it down. From either side: from the side of the performers onstage and from the fictional outside of those watching. It achieves its massiveness by representing the wall that is currently erected and extended under President Trump, and at the same time all other imperial border walls that were built and are being built all over the world. The (theatrical) wall’s insubstantiality and inconspicuousness stands for the invisibility by which it is often firmly established as a convention in the mind of those concerned.

I find myself in the borderland, as an observer. “Borderlands/La Frontera” is the title of the book this piece is based on, written by Chicana writer Gloria Anzaldúa, who died before her time.

“The term Borderlands, according to Anzaldúa, refers to the geographical area that is most susceptible to la mezcla [hybridity], neither fully of Mexico nor fully of the United States. She also used this term to identify a growing population that cannot distinguish these invisible ‘borders’, who instead have learned to become a part of both worlds, worlds whose cultural expectations they are still expected to abide by.”[1]

Fragments of her text, projected in white on the black gauze, bring me back to the present conflict:

A borderland is a vague and undetermined place created by the emotional reissue of an unnatural boundary. It is a constant state of transition. The prohibited and forbidden are its inhabitants. Los atravesados live here: the squint-eyed, the perverse, the queer, the troublesome, the mongrel, the mulato, the half-breed, the half dead; in short, those who cross over, pass over, or go through the confines of the “normal”.[2]

Theatre as a knowledge-imparting machine. I’m aware that the sand could just as well be water.

The individuals running suggestively towards the front now wear elements of historical costumes that seem unreal in their gaudy contrast to the uniform of brand sneakers and baseball caps that mark these bodies as being part of a global mass, Westernised by consumerism. The rhythm becomes increasingly more pressing, the steps and movements more dance-like.

The European borders of the ancient world
defined by the Mediterranean Sea
had been transatlantically shifted
towards a new world
where we Indians,
like the Arabs,
dark-skinned,
are infidels,
dangerous,
inferior,
therefore losers.
This narrative is imposed
through danced re-enactment.[3]

Amanda Piña’s piece Danza y Frontera (Dance and Border), embedded in the conceptual frame of the “Endangered Human Movements” series, is specifically based on a contemporary legend. It’s the legend of Rodrigo de la Torre, a folk-dance teacher, and a group of friends 14 to 15 years old from the El Ejido Veinti district of Matamoros, a border town in Tamaulipas, Mexico. One day, they swapped their traditional leather sandals for Nikes and danced the pop-cultural appropriation of a historical dance in public space. They became a symbol of an oppositional youth culture that protested against a dance tradition dominated by folklore, and, at least temporarily, they reclaimed areas of the public space in defiance of the all-powerful violence of drug traffickers. The dance spread in the form of videos on social media and was danced on both sides of the border, hip-hop musicians wrote songs about it…

It’s the narrative of a TWIST, a hack, a reappropriation. It’s a statement of resilience, a statement of a new departure, to which the choreographer added a dedication:

This work is dedicated to those that have the courage to move, to those whose bodies carry borders.[4]

In his book “The Wretched of the Earth” (1961), which became one of the key works of postcolonial theory, psychiatrist and philosopher Frantz Fanon described the ideological essence of colonialism as deeply destructive because it systematically denies the colonised all attributes of being human. This dehumanisation is achieved by means of physical and mental violence.

In the theatre, the border, the fourth wall, has long been demolished in an aesthetic sense. The fact that it is being rebuilt here serves as a reference to the symbolic border, the inscribed border, the colonial border that rises – like a crack – before the bodies, just as the wall of Trump’s “America” rises towards Mexico, like the Fortress Europe rises towards the south and east. The border, the crack, runs through the bodies, and together with her brilliant troupe of hybrid identities, Amanda Piña has committed herself in collaboration with Rodrigo de la Torre to bringing this crack, which both she and her fellow campaigners are familiar with from their own autobiographical experiences, to the stage.

Another fragment of a poem, based on a text by Nicole Haitzinger, can be interpreted as an analysis of specific types of dance:

At the end of the war with the Islamic “Moors”
in the Iberian peninsula,
a dance called Danza de Moros y Cristianos
was born,
to exemplify the defeat of the Muslim Africans
at the hands of the Christian Europeans.
During the conquest of America in the 16th century, under the reign of the Habsburg Emperor Charles V, la Danza de Moros y Cristianos
travels by ship to the new continent.
In those so-called “Conquest Dances”, the infidel “Moor”
is replaced by the infidel “Indian”,
who must perform the defeated “Arab”, thus performing their own defeat.[5]

I interpret Piña’s suggestion as a proposed third space within the meaning of Indian postcolonial theorist Homi K. Bhabha. It’s an attempt at translation that indicates the hybridity of cultural difference – in contrast to a traditional, essentialist understanding of culture.

Amanda Piña makes a great theatrical gesture to articulate biographically encoded experiences (including her own) with Western suprematism. She has undertaken to condense performative dance creations into essential statements and to spatially translate them into one-point perspective displays. After many years of collaboration with her equally gifted partner Daniel Zimmermann, during which they developed a joint language of form, this is the first piece she devised by herself.

In opting for deceleration in her choreographic approach, she has, to my mind, succeeded in this undertaking: she has created time and, by extension, space to perceive, think, feel. In the slow progression of the speed and intensity of the bodies in dance, indigenous practices, colonial narratives, pop culture and spirituality resonate as expressions of resistance.

Politically speaking, Piña uses this gesture to make urgent issues concerning the destructiveness of neo-capitalism and coloniality more tangible to a wider audience.

Each translation produces a loss and a gain, a “lost” and a “found in translation”. In the case of Danza y Frontera, the gain is twofold: Piña vividly visualises both the suffering of afflicted bodies and the resilience achieved by means of dance. The loss may lie in running the risk of over-aestheticising an issue. We, especially we as Western subjects, are called upon to mentally leave behind our one-point perspective, which also corresponds to that of classical theatre, and to take a deconstructive look at the theatre machine, in this case in the form of a model. When – and this is a truly amazing moment in the piece – the drummer, Edgar Uriel Soria, suddenly thunders his raging rhythm into the space in front of the thin gauze (thus crossing that border), we are invited to move, to explore the street. We are called upon to look at the border that runs through our own minds and hearts as a crack and face the complexity, the circumstances of a global machinery of production, exploitation and unequal distribution. We are asked to explore the theories of postcolonialism and decolonial theory: more specifically, the works of theorists such as Frantz Fanon, Edward Said, Gayatry Chakravorty Spivak, Homi K. Bhabha, Walter D. Mignolo, Marisol de la Cadena, Rolando Vázquez and others. They can provide us with intellectual tools for decoding the images that have been cultivated for centuries and seem to have become a permanent part of our identities in the process. Perhaps these tools are a prerequisite for breaking down the complexity of the present.

Amanda Piña shows us that bodies are not just bodies. They are always constructed as well, and it is important to establish a permanent alertness with regard to the workings of these constructions. The gesture of her piece may also contribute to a discourse that calls for a popularisation of left positions so that they may regain political relevance. It shows clearly that dance and performance are fields that create spaces and time for sensory approaches and contemporary fields of experimentation that are important tools to challenge, apply and further develop fundamentally democratic structures.

“This work is dedicated to those that have the courage to move, to those who's  bodies carry borders.”...

What is the relation between borders and coloniality? Which types of body does modernity/ contemporaneity promote? Which movement...