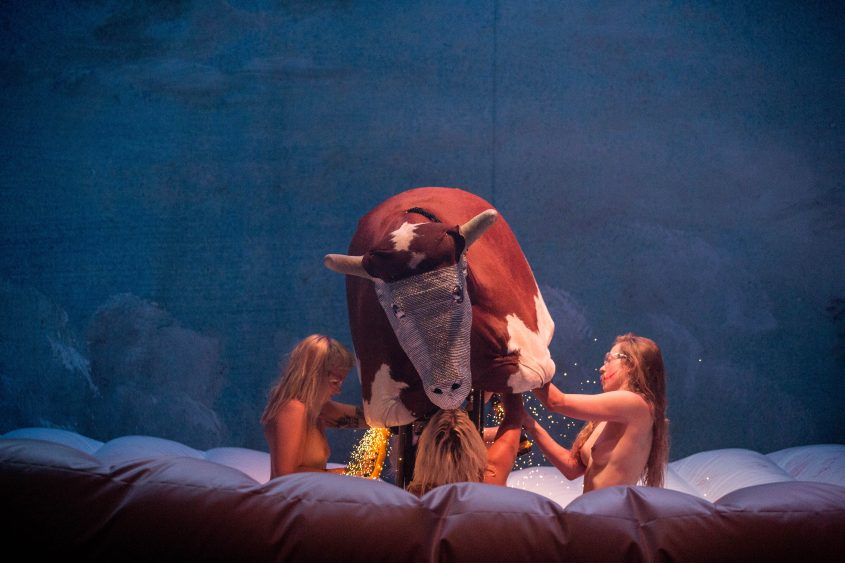 Florentina Holzinger’s Apollon is a weird freak show, a feminist reinterpretation of a ballet classic and guaranteed to be one of the wildest dance evenings currently on show.

Ouch, that hurts, doesn’t it? In her latest piece, Apollon, Florentina Holzinger stands naked at the front end of the stage and hammers an eight-centimetre-long nail into her nose. Her colleague, Evelyn Frantti, also naked, inserts a disturbingly long balloon into her throat, which seems to wander through her body. She pulls the empty shell from her vagina. Hang on a minute – that’s not possible, is it?

Even her first piece, “Kein Applaus für Scheiße” (2011) – co-created with Dutch artist Vincent Riebeek – was marked by pop-cultural nonchalance (songs by Rihanna) in juxtaposition with an ironic reinterpretation of classic body art from the 1960s. What had been shocking back then displayed a new casualness all of a sudden. When Holzinger slid through a puddle of urine made by her colleague like a playful child, this seemed infectiously naïve in an absurd way. When Riebeek puked blue liquid, it looked strangely beautiful. Provocation had rarely ever been more fun. Incidentally, real body excretions are used in Apollon as well.

Starting off as a vicious feminist freak show, in the course of the evening the piece develops into a reinterpretation of the ballet classic “Apollon musagète”, which premièred in 1928. In the original piece by George Balanchine, the ancient Greek god of the arts appeared to music by Igor Stravinsky, leading three female muses up Mount Parnassus. Holzinger has a kind of love-hate relationship with the ballet: the choreography is “crazy beautiful”, she said in an interview, but the gender roles annoy her. In her feminist reinterpretation there is no male god to choose a favourite muse, the women’s roles are fluid, they are goddesses and muses, well-muscled fighters and fearless superheroes. None of them are classically trained dancers, which lends a certain sexy-rough and at the same time fragile quality to the pas-de-deux scenes. Besides Holzinger, members of the naked women’s team include Renée Copraij, a long-time collaborator with Jan Fabre, and Evelyn Frantti, who is really a sideshow performer. In one of the phattest scenes she shoves a tube through her nose and mouth which acts as a drinking straw: a member of the audience can then drink a freshly mixed gin and tonic through her face. Not something you get to see every day in a theatre!

Karin Cerny born 1968 in Waldviertel, Lower Austria, studied German Studies as well as Theatre Studies in Vienna and Berlin. She regularly writes about theatre in the news magazine profil and in the magazine Theater heute, about fashion in the magazines Rondo and Diva. 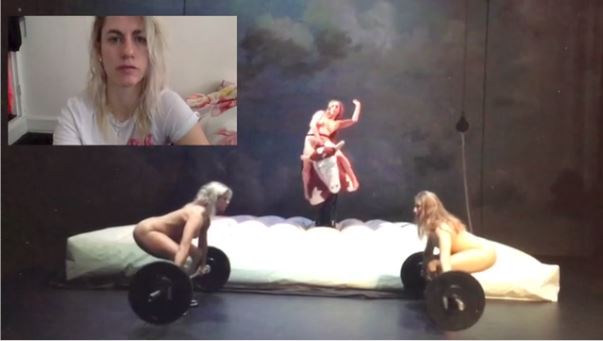 In Florentina Holzingers latest work, six naked women conquer George Balanchine’s neoclassical ballet of the same name from 1928 about the god of the arts and his three muses...