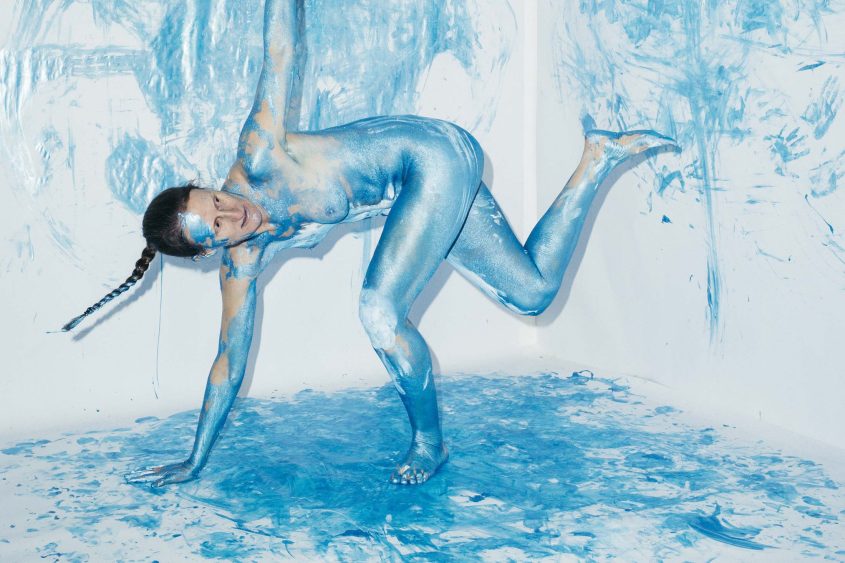 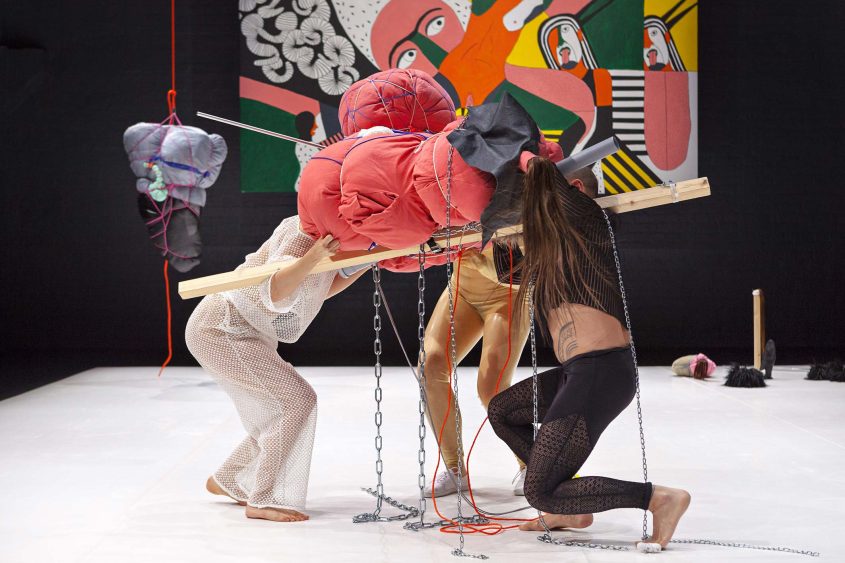 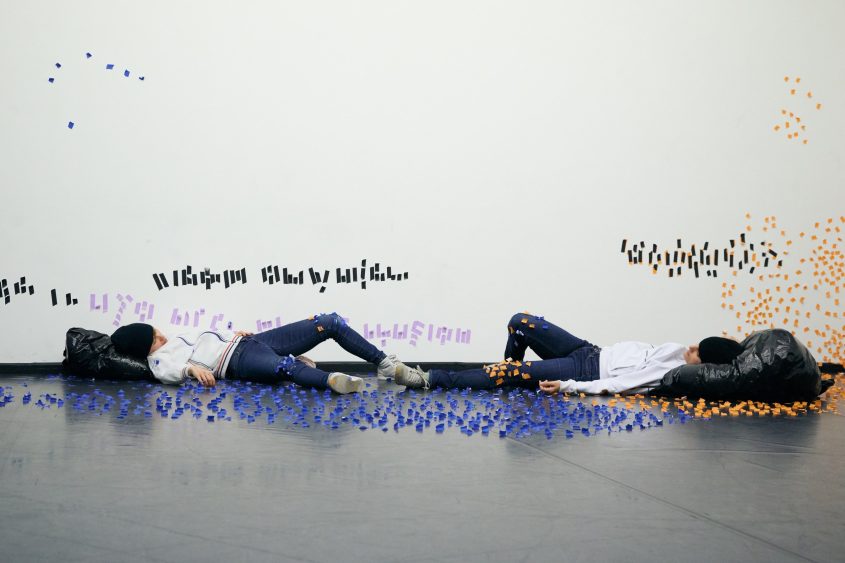 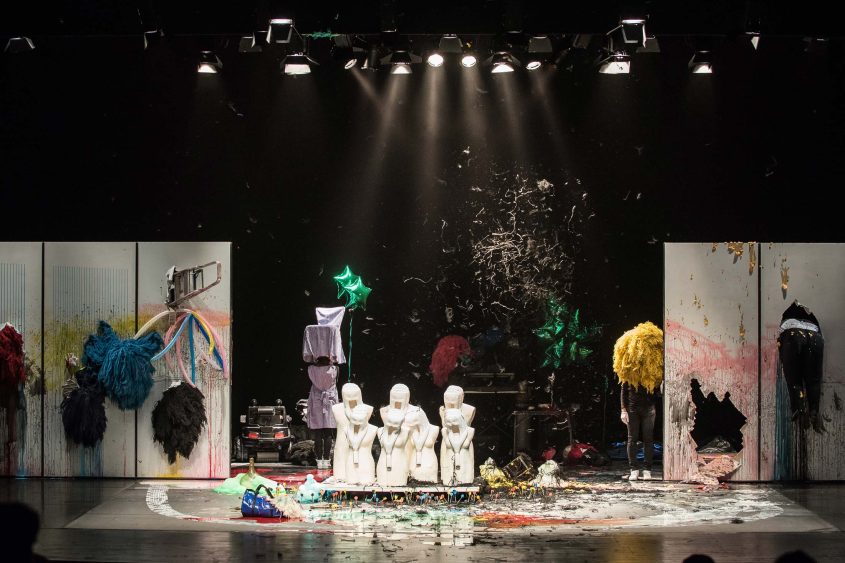 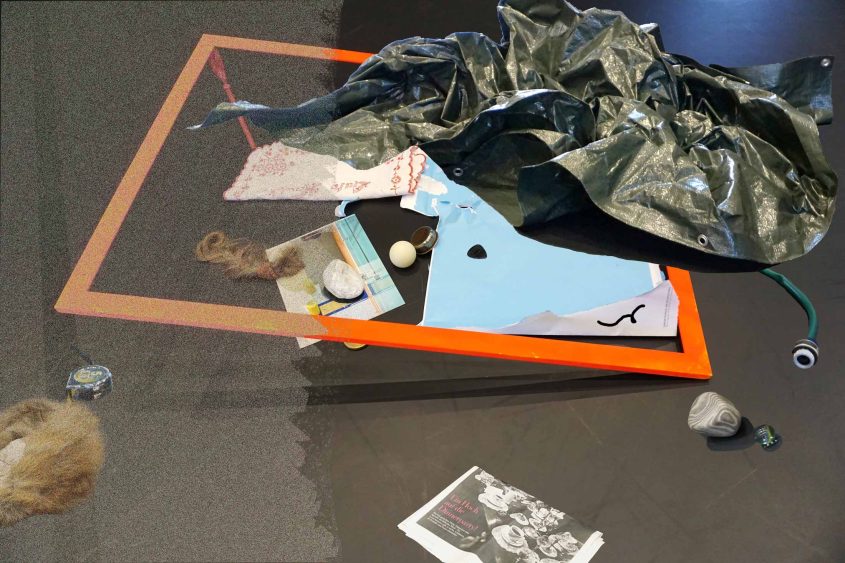 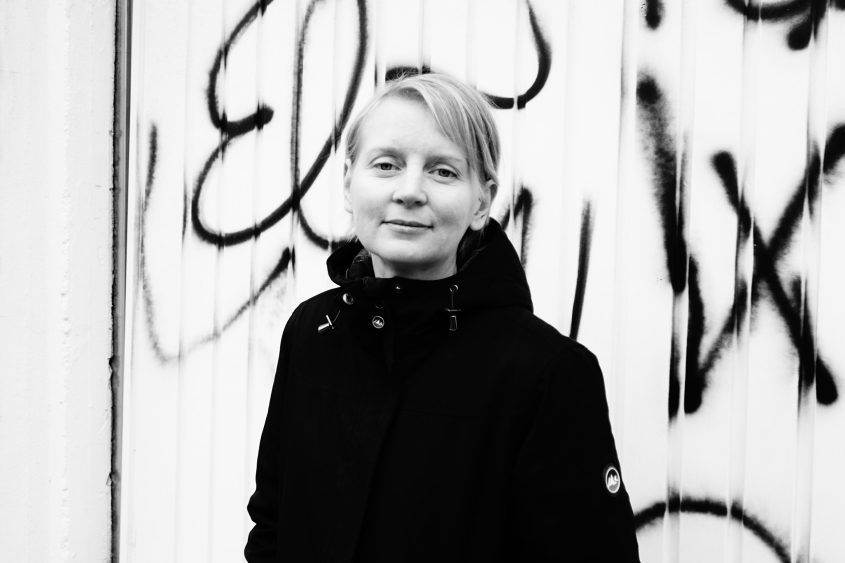 For some time now, materials – solid or liquid, amorphous or concrete – do not (simply) feature as props or as part of set decorations in contemporary dance and performance productions anymore, but they have developed a considerable life of their own. Many choreographers make use of them and combine them innovatively, while at times these materials are also regarded as individual beings, as equals among live performers on stage. These materials are set in motion and enter– even erotic – relations. The lines between animate and inanimate beings have been blurred. Thus, covering all areas from the subtle poetics and a morbid sense of humour to the politicisation of forms and the brutal battle of materials, we have invited a series of works dedicated to the intense contemporary interactions on stage between man and material.

French choreographer David Wampach’s ENDO deals with various traditions of performance art – from Yves Klein to the Japanese Gutai Art Association – and unleashes two bodies and several litres of paint. By using various text fragments, Lisa Hinterreithner’s premiere of and and combines controversial political issues, which pose questions of identity, nationalism and victimisation, with her sense for a reduced compositional use of movements and materials. In Blab by Finnish choreographer Sonja Jokiniemi, three dancers enter an intense relation with textile fabrics, ropes and chains and even reflect on erotic desires. Still, things get completely out of hand in Miet Warlops Mystery Magnet and will only leave behind a scene of joyous destruction. Finally, the last piece in this series of works will be Origins, a new production by choreographer Oleg Soulimenko. Origins analyses microscopic relationships and dissects abstract, functional and everyday objects until we are only left with the sound structures of these objects. And a final addition to the series will be a lecture on Moving Matter(s) by Martina Ruhsam. This lecture will focus on the lively debate concerning (partly) autonomous objects and the entanglements between human and nonhuman actors.

„A contemporary manifesto for an entertaining, insatiable, and colourful body.“ — Libération ENDO is an exciting and invigorating take...

Out of the darkness of the stage, a procession of images step into the light, setting performers and...