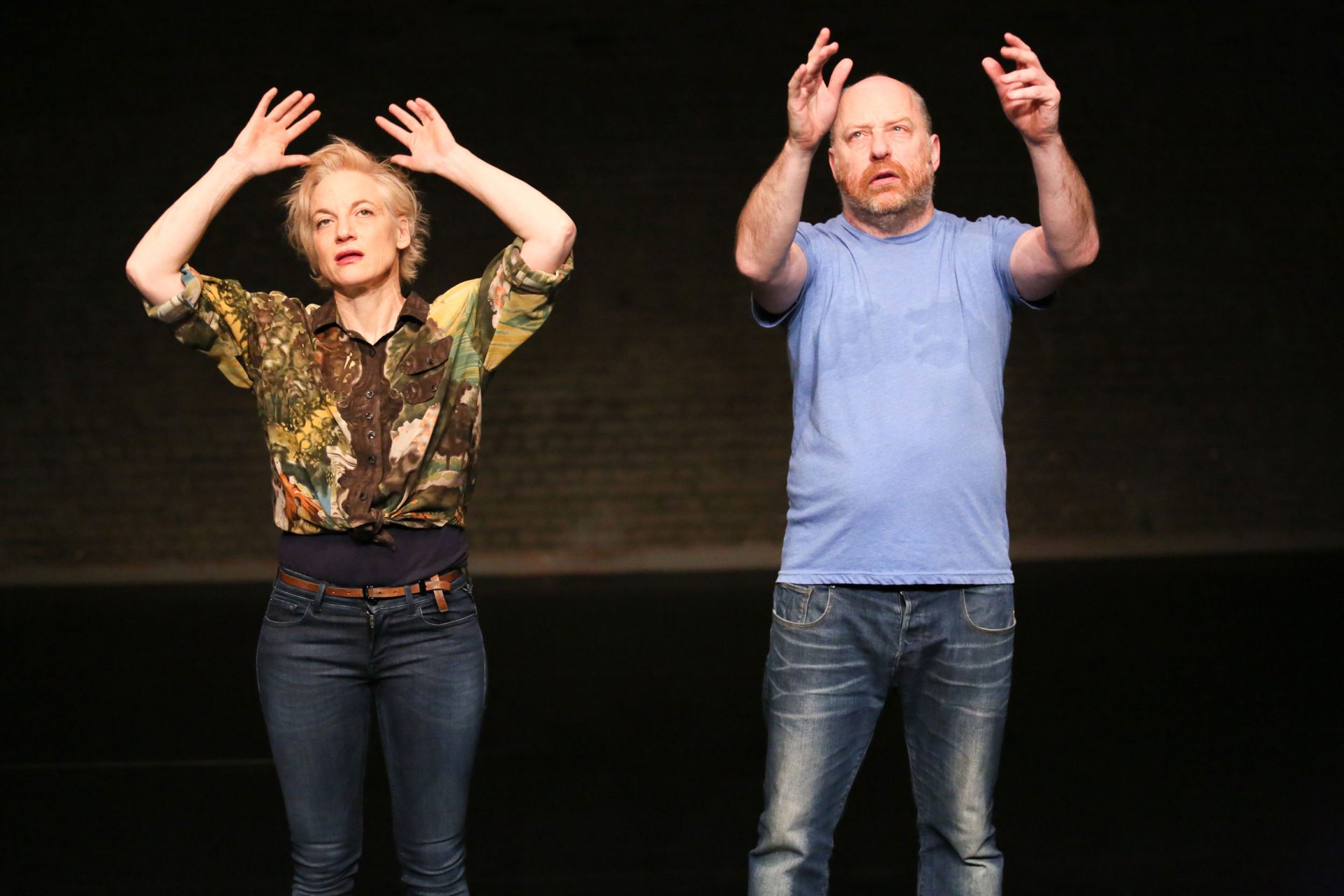 An empty space. A space of infinite potentialities waiting to be realised. Meg Stuart and Tim Etchells as passages of latencies.

It is not being explicitly asked, but the answers suggest that the question of “how”, of the qualia of movement in space, is being addressed.

In his attempt to interpret movements, to read Meg Stuart’s “dance of suggestions”[1], Tim Etchells is also continuously moving. The answers he keeps proposing are just as ephemeral as Meg Stuart’s dancing. At a rapid pace, the two artists thus design and discard micro- and macrouniverses of possible meanings, images and associations. Zooming in, zooming out. Here and now, here and elsewhere. They let us take part in the continuous, never-ending process of sense-making. They demonstrate the aspects of creation and the failure, which are both equally inherent in this process. The certainty of designation doesn’t even get a chance to establish itself. They let us participate in the impossibility of capturing dance; in the playful effort of finding words intended to generate meaning. It’s an indication, an explanation, an interpretation, a re-interpretation, a de-interpretation, an association, a dissociation, because: “It’s like words in front of your eyes.”

This creates a space of ambiguity, in which the various readings not only stand side by side but overlap, shift towards the absurd, spring up while already fading again. If the characteristic feature of dance is transition, the torrent of words illustrates precisely this: the transition from one possible interpretation to the next. A space where nothing is clear-cut: “It’s like straight lines that are more like circles or more like dots.”

Then there’s a preliminary answer that seems like a full-stop at the end of a sentence. “It is like this.” The search for suitable words comes to a standstill. Language fails in a gesture that indicates the dancing body. Tim Etchells on the floor mimicks Meg Stuart’s movement and indicates a spot on that floor with his finger. Language is subdued. In the end, this is exactly what language is: a finger that indicates something. The primacy of language is coming to an end. The loss of language. A change of perspective.

1st-person perspective: “I dance because…”

Meg Stuart offers possible answers to the question of “why”. Is this going some way to explaining the phenomenon of dance to us? Can questions relating to causality lead to meaningful explanations? A narrative that is plausible because the human species is trying to understand the world by way of stories? Doesn’t a story, in fact, indicate the meaning we attach to it? Or do we long for understanding? Are we grasping at concepts in order to ultimately be able to understand the meaning, the experience without having to die from it? What does it mean to dance, to experience oneself as a sense-making being? Looking to explore the full range of possible sensory experiences, to not be content with a metaphor that refers to something but to deliberately expose onself to the intensity of potential states of being. To seek out the space of potential meanings without defining them?

“I dance because it leaves no traces.”

Tim Etchells resumes his attempt and points to well-known illusions in our perception, which raise the underlying question: are we perceiving or projecting beings? His torrent of words is no longer purely associative but becomes increasingly narrative in structure while still rejecting to be unambiguous.

What is the fabric that our coexistence is made of? Is it rainbows, words, plastic bags, music, insects, perfume, sighs or stories? Or nothing? Is our material and immaterial reality nothing but a constructed illusion? What physical effort is needed to get rid of these contingent bundles of meaning?

Negotiation: “I am here. Are you there?”

Two narrative strands that are not connected with each other. Two people who tell their stories and in doing so identify themselves as individuals who occupy different positions and can take a stand by way of the self-image generated through the narrative. An increasingly static counterpoint to the flow in the beginning, culminating in a powerful image: holding an uncomfortable position on the floor, Tim Etchells embodies a rigid proposition that yearns for some room to manoeuvre.

After letting the audience take a peek into their individual universes of meaning, Meg Stuart and Tim Etchells release the audience into the vast scope of meaning they have opened, with a hint, with a potential jump into the…

Christina Regorosa is a cognitive scientist, a dancer and a shiatsu practitioner. She works in the field of digital humanities at the University of Vienna. Her research interests include the philosophy of dance, narrative cultural theories and neuroaesthetics.