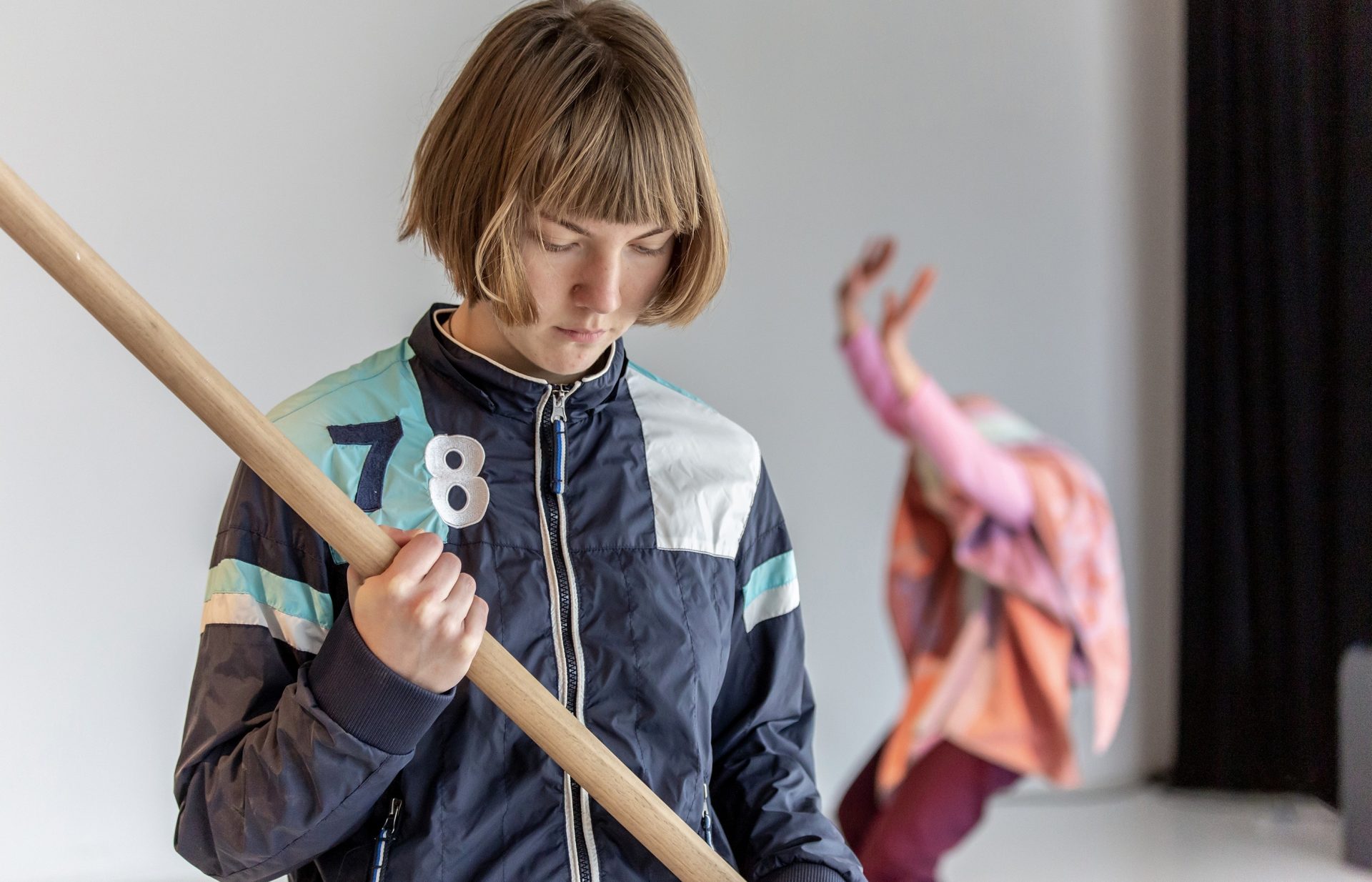 Throughout this year, marked by the most unanticipated events and bleak prospects, the ‘year’, which is just a figure of speech that allows you to hold on, to start from somewhere; I was leaning on the bodies of my friends, with whom I used to move together and from whom I was separated, and on the texts by others, whom I cannot reach.

I keep coming back to a quote by Hannah Arendt, cited by André Lepecki, which says: “[…] we have arrived in a situation where we do not know – at least not yet – how to move politically.”[1] Later in the text, we learn that moving politically means moving freely, and that this movement is a demanding, continuous, perhaps even exhausting, repetitive commitment. Is a practice.

The two performances, Study on Fool’s Paradise by Eliza Trefas & Katarzyna Paluch and urgent, in bodies (acab) by Dorian Kaufeisen in collaboration with Alina Bertha, Amina Claudine, Jolyane Langlois and Julia Müllner at first appear to be not only very different from each other, but even opposed. Study on Fool’s Paradise seems like an accumulation of contradictions, of intercepting impulses, distractions, stutters, interruptions. While urgent, in bodies (acab) invites you to experience the flow of the collective dynamic movement. But in the end, both pieces address the issue of how to move together in space, and how to appropriate that space.

Another quote – or rather the essence of several quotes – that stayed with me is a more recent one by Ana Vujanović , writing on performance and politics. She postulates that “public space is not the main site of politics” and that “live gathering of people in public is irrelevant [for Western democracies]”.[2] This quote is quite painful, especially given the moment at which we are reading it. Revolting against it, I wonder: what if there are places where gatherings still make sense? What if there are other constellations or gestures that are still relevant? In other words, what if this issue is just choreographic and spatial?

On the large white surface that forms the back wall of the stage space against the backdrop of a collective movement, the performers of urgent, in bodies (acab) take turns to complete a sentence: ‘STOP HOPING – START ACTING’, adding other notes, slogans and demands (‘no pasaran’, etc.) as well. ‘acab’ is a demand too; it is an exclamation, a command, a language’s affect; in some places it is an act.

This year, every text I write is about Belarus.

And it is easy to believe that writing is useless. What kinds of texts make sense in the revolution? Banners and chants, open letters, letters to prisoners, graffiti, messages to friends or reports. But at the same time, when everything has been said, said multiple times, pronounced in every language, inscribed on any available surface – what else do you chant? Shouldn’t language go on strike too? A friend told me that her lungs didn’t have any air left for the chants, that, after the start of the protests she had grown tired quite soon and didn’t have any energy left to shout. Revolutionary time is a time of exhaustion.

The electronic soundtrack of urgent, in bodies (acab) adds to the intensity and pleasure of collective motion. Unusually, however, the tracks do not blend into each other, and in the silence of the gaps in between, the sounds of the bodies reach us: the breathing, their weight. Also, they only seem to move in synchronicity – the alterations, the divergences, adjustments, individual characteristics and speed of repeated movements are apparent.

In Study on Fool’s Paradise, the dancers seem completely detached at first, even as they repeat gestures and dance together, there is a sense of remoteness, estrangement and distraction. The dancers look around, responding to obvious and hidden triggers – reacting and overreacting. Though highly intense, the movements are constantly interrupted; they appear to be a set of postures and positions in constant and rapid change, in continuous alteration.

After everything has been said and repeated multiple times, the chants are clearly not just a vocalisation of the demands – they hold a sense of togetherness and power; after everything has been said – the shouts, the noises, the heavy breathing state our presence. Not only political movement but stuttering too is an evolving commitment that “must be learned, rehearsed, […] practiced and experienced”.[3] Our strategy is to stumble.

The choreography of Study on Fool’s Paradise is literally a study, a radical rehearsal, a set of try-outs. One might wonder what initiates a movement: a random sound of a camera shutter, a strange body accidentally coming into sight, a dropped stick, a friend’s touch, the previous movement, a word, a sentence? One might wonder: what does ‘acting’ and ‘to start’ actually mean?

Towards the end, watching Eliza Trefas & Katarzyna Paluch first caressing, then throwing themselves against and smashing what seem to be random objects – a paper bag, a chair, a piece of fabric – on the floor, one might wonder how intense a gesture should be to be effective, to reach out, to finally be noticed?

It is hard to resist the temptation of enumerating, categorising, analysing and repeating these gestures. As if this could prolong the moment of agency, grasp its essence and transmit its power and affect beyond its context. Apart from the problematic nature of such an exercise, studying a gesture, its repetition and its rehearsal makes it less spectacular, less dramatic, more of a routine.

When in Minsk, it is impossible to not be part of the protest.
The very act of walking, the very presence of your body in the city – be it the city centre, the square, the main avenue, or your communal yard in the suburbs, or a bus stop – is saturated with politics. Your daily life is.
Every evening, on the way home we check local telegram chats and the news to see if there is any protest action or any police raid in the neighbourhood. Even if you don’t participate, in the end, it’s not up to you to decide. You could accidentally get in the way (of the police). It is quite strange that your very mundane walk home suddenly becomes an act of resistance.
When you are in the city, this means that you are automatically dragged into this diffuse protest.
It is interesting to think about what could constitute (political) agency here. And to imagine the protest as some kind of alien spirit that possesses your body at a certain point in time regardless of your intention or volition.
(I wrote this paragraph on 17 October 2020.)

A political gesture extends beyond the dynamics of continuous movement, beyond collective manifestations, trespassing into the mundane, with its fragility and irregular rhythms, through experiences that cannot be unlearned.

Olia Sosnovskaya (Vienna/Minsk) is an artist, researcher and writer. She works with text, performance and visual art, intertwining notions of festivity and the political within post-socialist contexts and beyond. Currently a PhD candidate at the PhD-in-Practice programme at the Academy of Fine Arts Vienna. Сo-founder of the WORK HARD! PLAY HARD! collective platform (workhardplay.pw) and member of the artistic research group Problem Collective.
oliasosnovskaya.com

Study on Fool’s Paradise is a platform for deeply embodied discomfort, confusion, awkwardness and errors in order to...