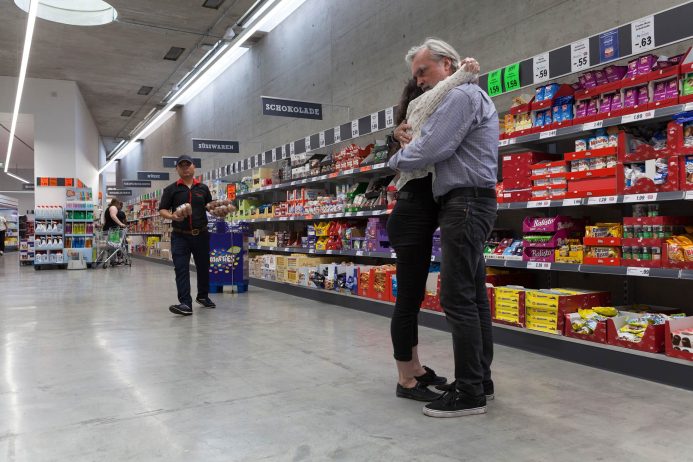 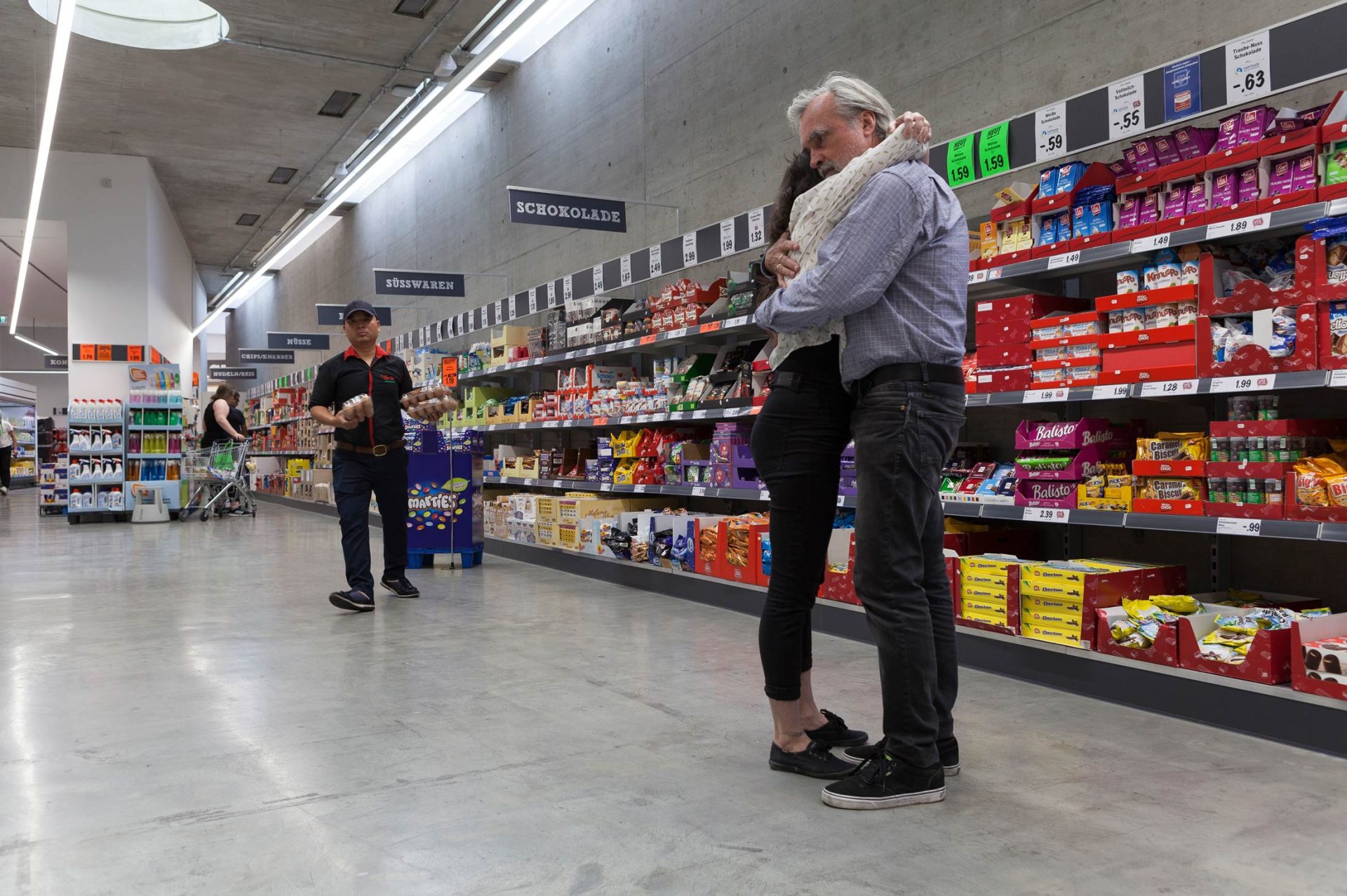 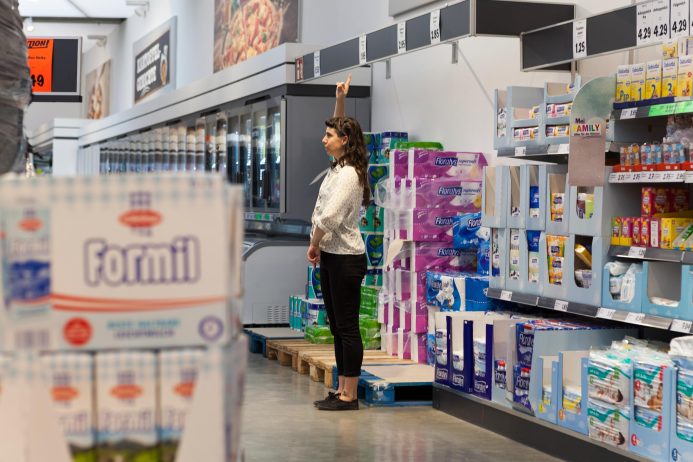 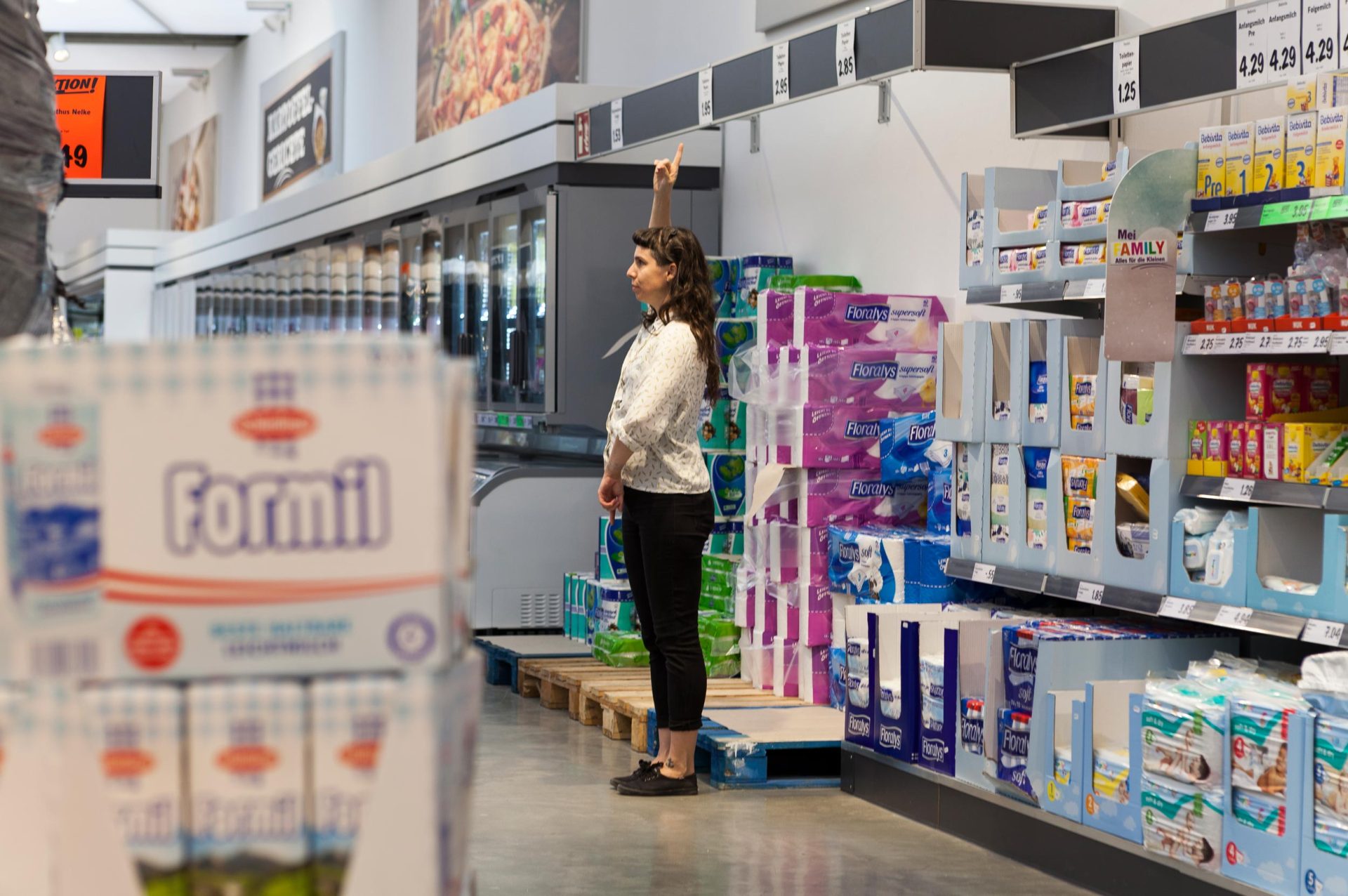 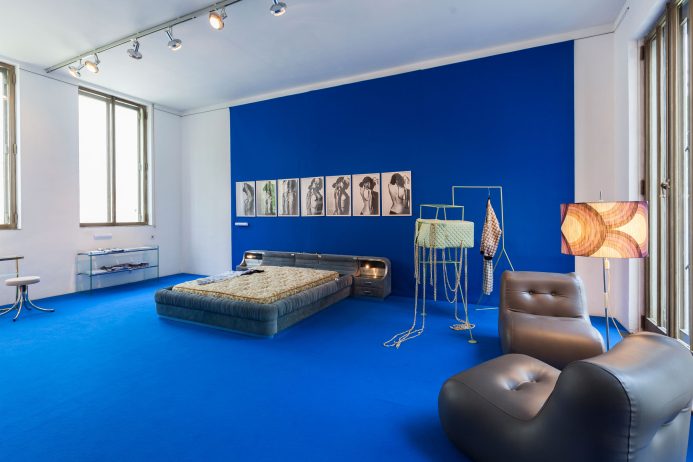 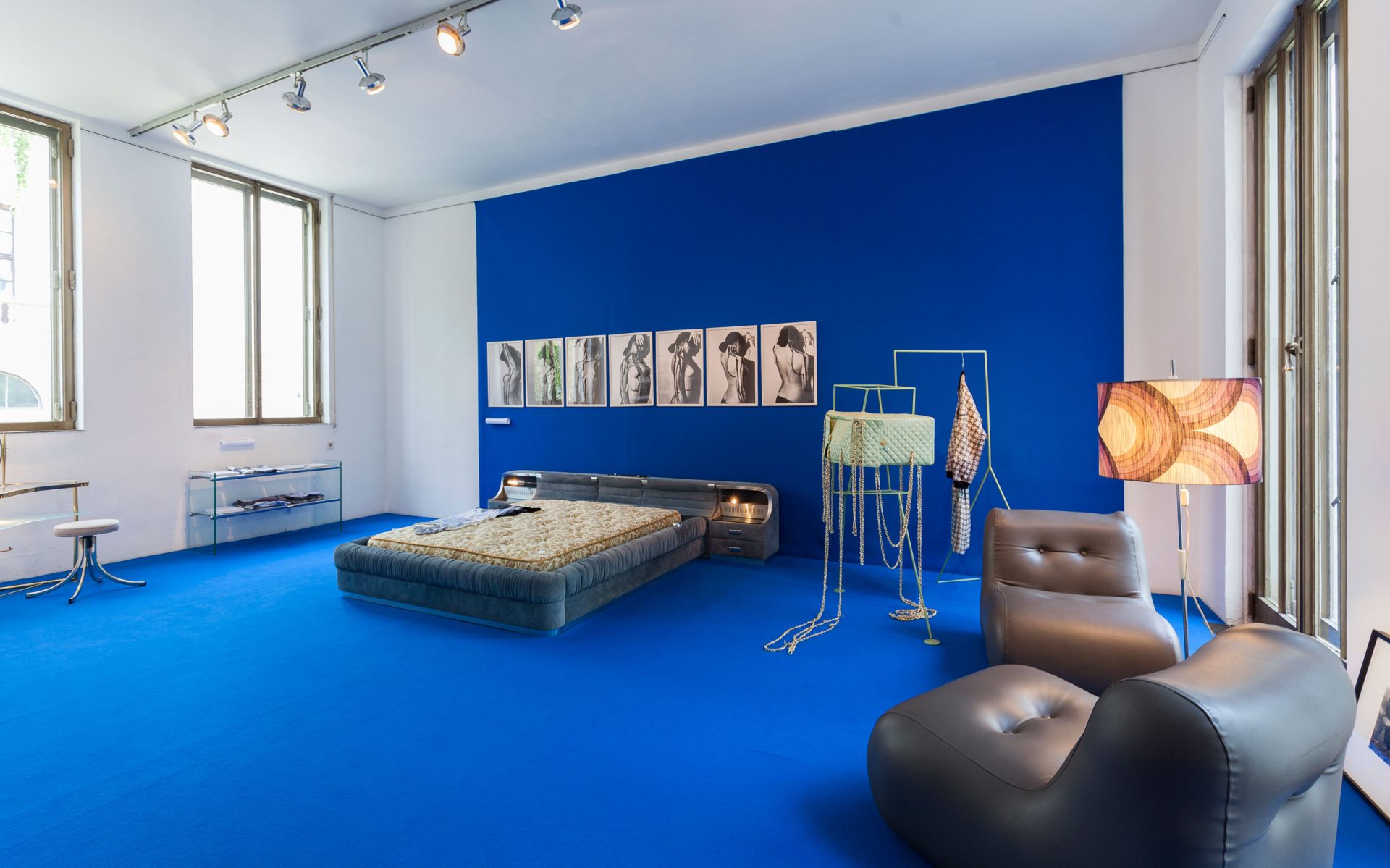 Commissioned by the Kontakt art collection and in cooperation with Tanzquartier Wien, French curator Pierre Bal-Blanc has co-developed several performances with Romanian artist and choreographer Manuel Pelmuş, which are shown in a branch of the Lidl supermarket chain on Wiedner Hauptstraße. This is a continuation, or rather a new Viennese version of a series of performances originally devised and curated by Pierre Bal-Blanc for the Piraeus Museum in the scope of documenta 14 in Athens. In Athens, the scores for the dancers’ interventions in the space dominated by ancient sculptures and their corporeality were provided by artists also represented at documenta 14 with their works. In Vienna, on the other hand, it’s the history of performative art in the countries of central, eastern and south-eastern Europe that is brought to mind and to life. Back in the 1960s and ’70s, the aim was to undermine traditional genres of art and subvert conventional forms and venues of presentation. Art became mobile in the literal sense and sought out public spaces and social situations beyond the beaten track. The artists represented in the Kontakt art collection, which specialises in central, eastern and south-eastern European art, provided the template for the “activated gestures”. This means that they are not only historical reference points but also present-day providers of ideas (they were all personally contacted and included in the “activation”), and their works owned by the collection are exhibited concurrently at Wittgenstein House.

The exhibition context is thereby extended and “commented on” by a performative dimension; past and present, art space and urban space are linked in multiple ways. However, the exhibition titled Collective Exhibition for a Single Body is itself an extended form of presentation that deviates from the usual, as the works of art are integrated in a furnished setting that calls the original function of Wittgenstein House as a residential building to mind. Artist Jakob Lena Knebl was commissioned with the furnishing. She drew primarily on furniture and prop design of the 1970s, whose main features were technoid and industrial materials such as chrome or Plexiglas, and which developed the shapes of Bauhaus aesthetics further. This creates a homely and personal atmosphere in the exhibition rooms, whereas the sterile atmosphere in the supermarket is disrupted by the performativity of corporeality.

While the danced interventions at documenta 14 still took place in a museum environment, they are now presented in a setting where one would traditionally not suspect to encounter art, in a place that, at first glance, is diametrically opposed to artistic activity. Supermarkets are spaces determined by marketing strategies; they are not so much places of intellectual persuasion but rather of surprise and inducement tactics. Here, consumerism celebrates itself and gives the illusion of a colourful, healthy and beautiful world while, in truth, brutal, capitalist cut-throat competition reigns. However, the place is itself a converted art space, as it used to house the exhibition space of the Generali Foundation. And that wasn’t just any art space but one that presented the most advanced art of modernism, neo-modernism and the present, i.e. various different kinds of art, which shared a very high level of reflection in relation to sociopolitical issues and developments. And it also showed art which in itself was already interdisciplinary and, at times, performative. The precision architects Jabornegg & Pálffy endowed this space with for the presentation of art can still be felt. Not even the gaudy world of goods shelves and their over-bright “Buy me!” message can cancel it out. And for those who saw groundbreaking exhibitions here, the reappropriation is still disturbing, to say the least. No less disturbing than the performers now acting in this space are for some supermarket customers. The loss of an important location for art is mitigated, at least for a short period of time.

Even though, on the outside, the performers look just like supermarket customers in their everyday clothes, their behaviour deviates from the usual shopping routine. They stand out with their repetitive movements and gestures, are perceived as strange or alien actors. A distinction must be made between two kinds of spectators, however: there are those who go there on purpose, who are informed and know what’s going on. The vast majority, however, encounter art unmediated where they don’t expect it. Salespeople sometimes explain the situation to astonished customers, to reassure them that this is art. A somewhat comical reversal, as the salespeople thereby take on the role of those in the know, having to explain art to, in some cases, surely art-savvy customers. The fact that art can still actually be exciting and, for some, even shocking, can be witnessed here as well. But there is also a dynamic that emerges between the visitors: those in the know observe those who are ignorant, and inevitably interpret their behaviour. They not only watch the performers, they also see them as being observed and interpreted by others. “Reversal of roles” is really the name of the game here: the supermarket itself is now a permuted space, not only in relation to the current performances but also in comparison to its original function. Its customers spontaneously change roles by becoming spectators. Internalised modes of perception and function are thus called into question. The gestures, which seem absurd at first glance, cause a rupture in the absent-minded act of shopping. The purpose of this place is to find certain wares that provide nourishment, not to think about life and the workings of merchandise management. Customers rush through, want to pay and leave again quickly to use the purchased items as intended. The performer lying down on the floor in front of the cash register, who remains motionless there for a while, represents a blatant antithesis to the hectic shopping procedure, even though or because he appears not to do anything. This raises the question of whether it isn’t actually the supermarket logic and our associated automated behaviour that is strange and absurd. And the artistically performed gestures of repetitive movements could possibly make us realise that shopping is ultimately a repetitive act in itself, an existential Sisyphus drama that we constantly mistake for a unique experience – not least because marketing strategists keep telling us so unremittingly. These performative acts thus have the potential to enlighten – precisely because they don’t fit in with the usual routine. But they also bridge the gap to the past, when artists conquered the public space and “inappropriately” interfered in places where otherwise only everyday life was happening. Many things have changed since then, others haven’t. In the end, meaningful art still performs the dance of life for us.

Collective Exhibition for a Single Body

Collective Exhibition for a Single Body – The Private Score – Vienna 2019 is an exhibition of performances...

By looking at the private Viennese collections Kontakt, Generali and TBA 21 the series of publicly held conversations... 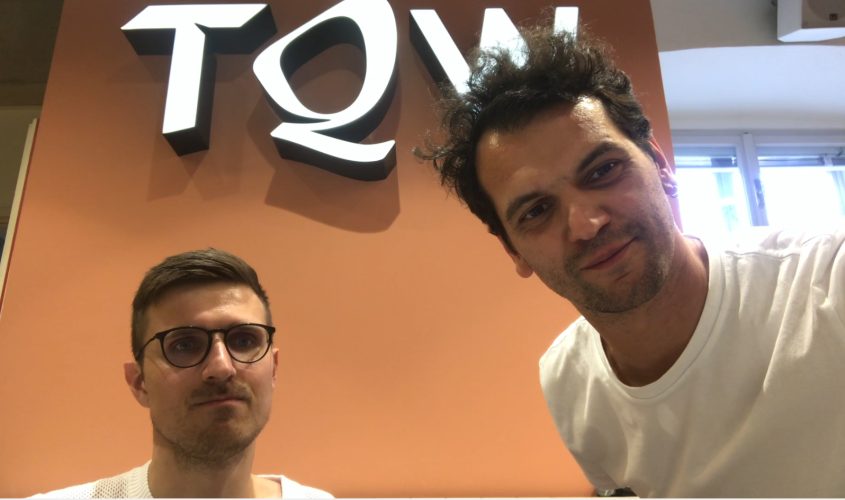 Performances at the supermarket: How are the historically radical gestures of Eastern European artists inscribed in the present-day...