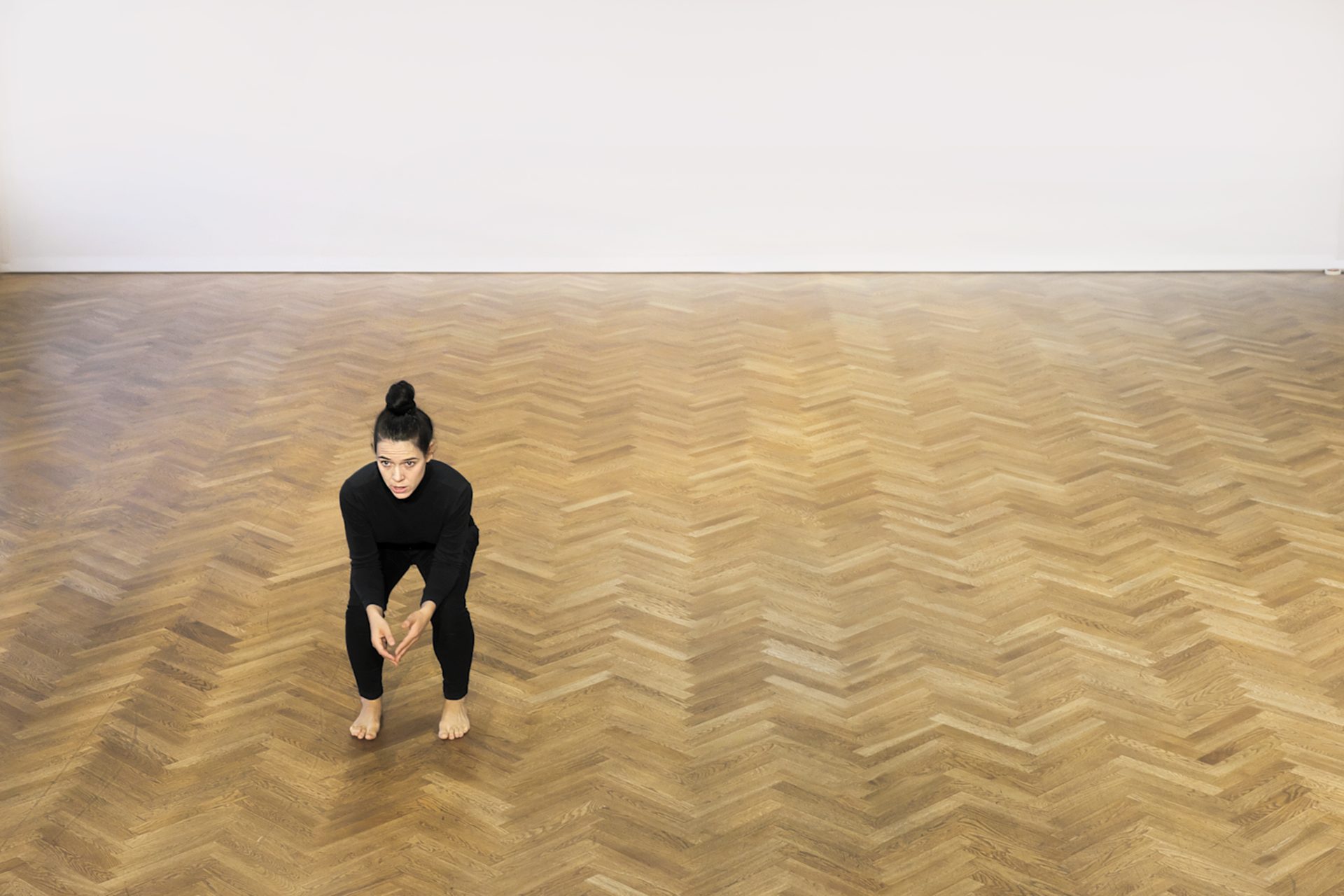 I am confused…so many layers of meaning! I mean: suddenly! Like most people in the audience I have just watched a performance about intimacy, about an intimate relationship between performer and audience, about breaking the infamous fourth wall. It is almost if Marta Navaridas was called by us earlier in the evening: hey you, Marta, could you possibly do an impromptu performance for us? And she arrives au naturel, without make-up, just her in a black dress, in this empty room lit only by overhead lighting (and which encloses all of us), with no music, no effects, and she describes her flat to us as if all of us were standing right there with her. In that very same flat. But perhaps even in her life. Whatever may be symbolized by a home and its interior, and may inform us about its resident. Books (“Politics & True Desires”). The closet (“I could fix a lot of things”). The bedroom (“I like my bed a bit bouncy”). The way the corporeal narratives intersect: While we reflect on what we have just seen, in the passageway between TQW and Leopold Museum, which is home to the desperate smokers, we realize how different our routines are when it comes to shaving, wiping one’s own bottom, and, definitely, washing hands… all in all, that we are so taken by the display of the wet room intimacy that we instantly feel the need to reflect on our own history of hygiene, our own dressing and undressing behaviours – no fourth wall at all.

„Mama Won’t You Keep Them

Castles in the Air and Burning?“

Radiohead, „Where I End

So, we laugh. We smile. We are full of empathy. At least, I am. But a room of sixty people might also just help everyone get a feel for the person sitting right next to them. At least, in my part of studio 2, in my “hood”, there I could feel empathy, joy and curiosity, all because of this person who looks and speaks like Marta. This person who lives in Graz like Marta, but who might also just be some sort of tangible, figurative and humanoid fictional character. For the most part, we already know Marta (the real Marta), and again, I dare use the pronoun “we” when talking about the confusion of “liking” and “knowing” the real Marta. Still, performance-Marta is also someone I would like to hang out with. She is a keen observer of our local culture (even protest marches are fairly quiet in Austria, she states, only a noisy neighbour provokes a real outcry), she is witty, she prefers red to anthroposophical colours, and even in a sitting-on-a-toilette-seat posture she looks like a degage rock star. She speaks to us directly: “I would like to be a better person”. And yet, we can still determine how much we like to get involved in her life and her story. And, indeed, I love being part of other peoples’ lives. I generally believe that I am that much into the whole danceandperformancescene because of the inspiring, self-conscious and grounded people. Exhibit A: Navaridas & Deutinger.

But where was I? Right, confused again! “Who is the people, by the way?”, Marta asks in the promotion video for her performance. One comes across the same question in this evening’s programme. Marta responds: Me. The “me” indicates her, not me. She represents the people. Amusing. I mean interesting. I never thought about this during the performance. But I do not suppose I really missed out on that thought either. Nevertheless, the whole concept had its starting point with this idea. And I am sure it was with her over the entire course of the rehearsal process in her bathroom in Graz, with the hideous glazed tiles and the existentialist ceiling above.

By the way: someone from the audience regarded Marta as existentialist / ballerina / Kung-Fu girl / mime. And she was pleased with all those attributions.

Scout Niblett, „Do You Want to Be Buried With My People“

Gil-Scott Heron, „The Revolution Will Not Be Televised“

As I pointed out earlier, there was so much more I could reflect on after the performance, which does not change my initial experience of the performance but assists me in finding new layers of meaning. I was reminded of Adrian Monk’s “These are people – they believe everything”. In this sense, also, Biljana Tanurovska’s statement regarding people from the Balkans (“we believe a lot”). And, of course, “humanity is ok, but 99% of people are boring idiots” (Slavoj Žižek). Thus: the impossibility of being the people. Very likable, Navaridas & Deutinger. At least, I thought so. What is more: “People give their bodies to science – I think that cannibals would be much happier” (Jim Moriarty).

Finally, back to the title: “I would like to be a better person.” Something I totally forgot about during the 60 minutes with 60 people and 1 Marta in one empty white room. As it happens, some visual effects were involved at the end of the performance: a prismatic reflection of sunrays shone a light on the wall of the flat in Graz (well, its imitation, I mean). Rather spectacular.

Exactly, the title. Well, I often think that too. Work for Médecins Sans Frontières in some capacity. Help more refugees. Recycle plastics. Read a lot more about white privilege. Face up to people voting for FPÖ, otherwise, you just exclude people the same way they do. I can’t help it, but as long as I think about these things in roman catholic terms (scheme of guilty conscience) I will not embrace these thoughts. But what good are these thoughts without action then, or in the words of Mister Diederichsen: “To be left-wing without being naive would be a good start”. Perhaps this might also be the reason why I tried to ignore these aspects in I would like to be a better person.

Fiona Apple, „Better Version of Me“

Kendrick Lamar, „The Blacker the Berry“

The Notwist, „One Step Inside Doesn’t Mean You Understand“

Sheryl Crow, „No One Said It Would Be Easy“

Danceandperformance, you mean so much to me!

Marta Navaridas, you are so many to me!

Rio Rutzinger born in Upper Austria, started to work with ImPulsTanz in the early 1990ies. He worked with Stephen Petronio Company and Randy Warshaw Dance Company in New York before he took over the artistic direction of ImPulsTanz Workshops & Research as well as the EU-project LifeLongBurning. In 2016 he launched the workshop series visual arts X dance in collaboration with Tino Sehgal and Louise Höjer. In addition, he was 10 years president of the Austrian Frisbee Federation and works as a juror at various international dance competitions.

“Until now finding myself was already having an idea of a person and fitting myself into it: I’d...