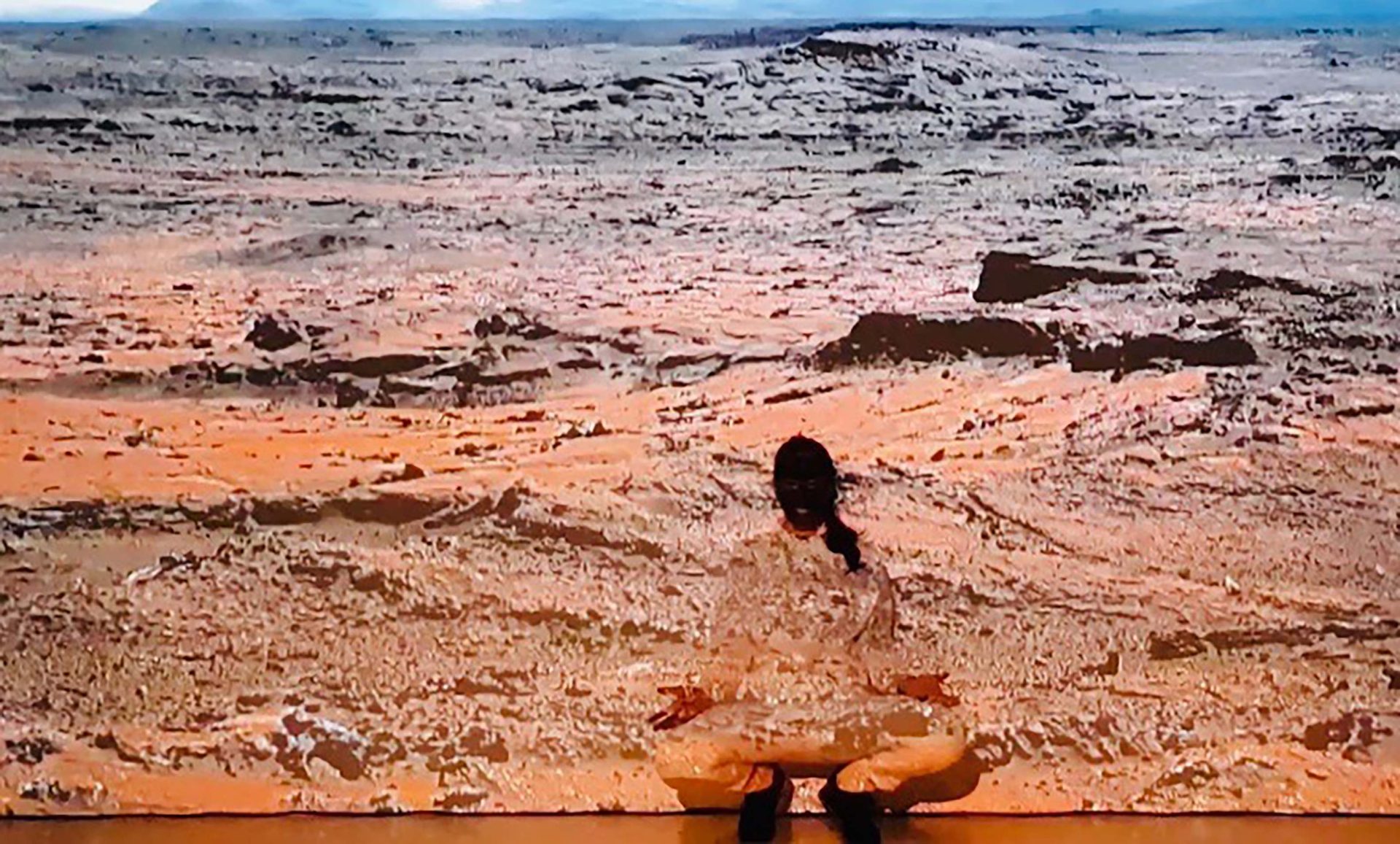 © nadaproductions
An interview with Amanda Piña by Claudia Heu

Climatic Dances is the fifth part of Amanda Piña / nadaproductions’ Endangered Human Movements series dealing with human movement practices that have been cultivated around the world for centuries. Due to the COVID-19 pandemic, the premiere at TQW has been postponed from 26 March to December 2020. In conversation with artist Claudia Heu the choreographer gives insight into her latest work.

Claudia Heu: Six years ago, nadaproductions started the project Endangered Human Movements. A series of performances, workshops, films, installations, talks, publications and a comprehensive online archive were developed, in which ancestral embodied practices – movements, dances and forms of world-making – re-appear in the context of the theatre and the museum. This re-appearance of ancestral forms of movement has effected a push towards decolonizing contemporary arts and culture by introducing critical perspectives from the fields of anthropology, history, philosophy, the visual arts, dance, choreography and contemporary-traditional indigenous Amerindian knowledge. This approach embraces not only contemporary shamanism but also knowledge that has been passed on orally, social knowledge about the body, movement, touch, healing, plants, and about perception and the interconnectedness of life forms. It reveals ritual diplomatic knowledge as applied to the relationship with other beings.

Amanda, Can you tell us how work on your latest piece, Climatic Dances, began?

Amanda Piña: After having created DANZA Y FRONTERA, I wanted to focus on issues of the environment. I talked to Austrian-Mexican anthropologist Johannes Neurath, who had contributed extensively to the project The School of the Jaguar and assisted in creating the whole performance The Jaguar and the Snake. He recommended that I talk to Alessandro Questa, a specialist in dance and climate change. Alessandro Questa has worked with the Nahuatl-speaking Masewal people of the northern highlands of Puebla, and, also like Johannes, he is a dance anthropologist, who has practiced their dances with the Masewal for over 20 years. In doing so, he focused on two types of dance, one called “Negrito” and the other “Tejonero”. The Negrito has been described as an “Afro-Mexican dance”, which is said to have evolved from of the Nahuas’ (Nahuatl-speaking people) impressions when they encountered enslaved Africans working on the cane plantations. The Tejonero was supposedly a hunting dance. Such were the standard stories about the origins of these dances. But Alessandro Questa, who speaks Nahuatl, developed a different reading/interpretation based on extensive research, contesting the modern colonial narrative that appears in books of folklore: that these two dances are actually covert forms of relating to the mountains, as Earth beings. An Earth being is an entity that can be made present through dance and embodied collectively. For Alessandro Questa, Masewal dances are holograms of socio-ambiental relations. Earth beings, and their embodiment through these dances, are there to allow the communities to understand the agency of non-humans, such as mountains, bodies of water, the forest or the spirits within those ecosystems. The dancers become the mountain. Tipekayomeh, the original name of one of the dances, actually means “body of the mountain”. The Masewal believe that everything that exists comes from inside the mountain.

CH: How did you put your research into practice in Mexico?

AP: I worked with students from The School of Folkloric Dance of Mexico. They engaged with these two dances, learning them through informants, who shared their knowledge of the dances. As a first approach, I made a film. I collaborated with Juan Carlos Palma, who is a teacher at the school, and we created two versions of the dances, which the students danced wearing partly original and partly newly designed costumes.

CH: What was your process once you considered bringing the project to TQW? It would have to involve a significant amount of translating.

AP: I thought I would not work with the original dances the way I did in Mexico. So I decided to use the Masewal as a reference, to embody the earth with my own means, to become the mountain in my own way. So I entered into the film I had made. There was a landscape, a desert, a dead earth, and I started to disappear inside the earth. I dressed in white, became a living screen and disappeared, embodying the movements of geological structures throughout the unimaginably long time span of Earth’s existence.

CH: What kind of landscape and what kind of mountain did you engage with?

AP: I used images from Mars because I wanted to talk about extractivism. In the area where the Masewal live there have been many attempts by mining corporations to start extracting minerals. I watched films in which the Masewal, together with other mestizo and indigenous groups, opposed the mining companies and managed to stop them. They decided to dance more because they realized that there is an imbalance: the birds no longer come when they used to, the weather has changed. They connect these occurrences with the lack of offerings, the lack of care for socio-environmental relations. So now the dances are coming back with renewed strength.

CH: This sounds similar to the songlines of the Aborigines in Australia. What was the method you used to connect with the mountain?

AP: I had worked on forms of embodiment that were animal, vegetal and human at the same time for volume 3 of my research project titled The School of the Jaguar. To become a mountain being, to embody geology was a similar practice but even more abstract. It required my dance to become less human-centered.

Then I went to Chile to my mother’s house, and there everything became more personal. There was this mining company called Anglo American on the mountain above my mother’s house. Anglo American dug an 8-km-long tunnel inside the glacier, without permission from the government. And now the wells are drying up, the river is becoming increasingly polluted. While I was in Chile, I once had a dream in which the spirit of the mountain, the Apu[1], came to me. It had a very strong presence, I was very afraid. Then I did a ceremony with my shaman friend and again had a vision of the mountain being, and after that I took a walk up the mountain and talked to the community. I think the spirit of the mountain came to me because there was a connection and it was not abstract anymore. The Anglo American company is contaminating the water my mother drinks, the whole area is drying up, becoming a desert, like the one in my film. It became more personal. It really affected me.

It became obvious that my solo was going to be about extractivism and understanding the activities of mountains, like producing water, crops and air. When a mining corporation starts to destroy the whole ecosystem with toxic pollution, making it unfit for life, that is called production, progress and development. What mountains do for the economy and for life is invisible, just as women’s reproductive labor is not recognized as work. Science, which has been mostly in the service of modernity/coloniality, operates on a type of separation between life and non-life. What is dead is less important and we can exploit it. But we cannot say that water is dead. We are children of water and our lives depend on it. When I open my water tap, I don’t drink water from a water factory, I drink water that a mountain created in the Alpine foothills. I am deeply connected to the whole, we all are.

AP: Yes, all these issues are about broken relationships, which are only apparently broken. About how this crisis is also a crisis of ethical thought, and that you cannot solve it by only applying the same thoughts that created the crisis. We need polyphonic voices, from different perspectives, different ways of understanding. That’s why I’m working with indigenous forms of knowledge.

The question for me is about the usefulness of art and of performing, of representation. If I engage with the mountain, I am forced to address it as a living being. In that sense, I would like to use dance and choreography to address what sustains us. To research and learn about the techniques of offerings still alive today and then be able to actualize them in order to repair broken relationships. For example: “Where does the water come from, and can we acknowledge the fact that we are water through a collective offering?” And that would be the performance. Not me showing something, but something being done collectively. An art of the user’s value, an art of feminist care.

AP: Exactly. But how do I connect these two things to present something at TQW that serves a realistic viewpoint?

CH: Do you think the theatre and similar institutions are outdated? I mean, there is still a lack of support and places made available for open art forms or ways of thinking about art differently.

AP: The theatre is conceived in a similar way to the laboratory, I think: an enclosed space detached from the web of relations. I think, in the future, every theatre should have a department, a team of persons who truly and seriously work on establishing connections with different communities. It cannot be that it is always the same white perspective/audience. The art we are doing is more than an object, more than a show. It is also a form of sensitive knowledge, and that is very important today. The concept of a mere spectacle is unsustainable. It becomes art as an event of consuming. When connected to different communities, we could create a more diverse way of working with audiences and with artists, taking more time and going deeper, working outside and inside the theatre. Climate change is a force to change the way we work in the arts and to become more engaged, to come out of the bubble and to finally land on earth. It is urgent.

[1] Apu is a Quechua word for addressing a tutelar mountain in the Andes, whose being exceeds Western ontologies.

Claudia Heu is a Vienna based artist, performer, and teacher working in Europe, Mongolia, and the United States. Her work includes site-specific performances, installations and interventions. Collaborations are always different, depending on the project and location – including filmmakers, activists, hairdressers, actors, bus drivers, city planners, visual artists, or night watchmen. claudiaheu.com

Choreography as a tool for establishing socio-environmental relations