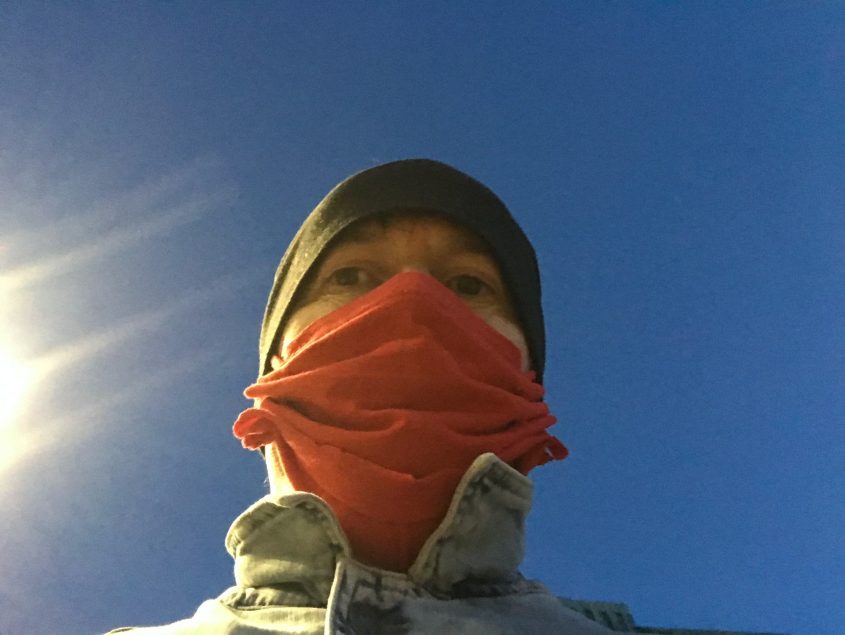 One day, I was told I cannot move anymore the way I moved before.
THE virus turns our bodies into weapons and targets.
Maybe I am a shooter? For sure, my body is a target, every body is a target.

– as if from the body of Spinoza, four ells, four elbows.[1]

Right now, there is an enormous amount of work done in order for nothing to happen.
Cultural institutions are as busy with cancelling/postponing as with organising events.

“Life will become increasingly solitary – but not necessarily less happy, and will be lived out in large detached houses. These will consist of a vast environment, a bare loft in which all life’s functions will be played out like on the theatre stage, with no need to isolate oneself or find private space. Electronic equipment, which extends the senses, will be an integral part of the house. Its simple space will have no relationship with the exterior, since this would only offer the image of the outside, because all houses will tend to be the same. Each house will be the terminal of the energy and IT networks, but also a transmitter station, a place for telecommuters and an interactive centre for communication with the entire planet. People will no longer be buried in cemeteries. Instead, the house will be the tomb of those living in it.”[2]

The place of dance

Where are we going to dance?
At home? In the streets? Or? In dance houses?
Locally? Nationally? Internationally?
Or just in front of a camera?
/By the way, where is the once so popular video dance from the 1990’s these days?/

Will dance become so immobile that it won’t move from the place where it was created?
Will we face extended mobilization for immobilization, just as we did during the first corona wave?

The face of dance

How are we going to dance?
With masks?
Made in China or homemade?
Or specially made for dance or any other physical activity?
Will we use masks as in some ritual form of dance?

Will we have a reinvention of masks à la Mary Wigman’s Totentanz or Kurt Jooss’s The Green Table?
Will the masks become a part of costume design?
Will the masks still be obligatory but neutral protection?
Or will they become a point of differentiation?
Or a place for a production of meaning that goes beyond the sign of the corona times?

Will performers wear the masks like medical employees and policemen do?
With transparent visors?
That make breathing easier?
And the face fully identifiable?

How will our dance be affected by wearing masks?
Will it get slower?
Will we take off our masks during the show?
Will this have a special meaning?
Will this be choreographed?

How are we going to measure the distance between performers?
With poles/sticks that will regulate a prescribed physical distance between the dancers?
Like in Oskar Schlemmer’s Stick Dance?
With markers on the floor that are visible to dancers only?
Would the performers be warned by the intensity of a beeping sound if they were to approach each other in defiance of the designated distance?

Will we have another wave of solo dances?

Or will we have some kind of Lucinda Childs with Sol LeWitt’s composition of separated bodies on stage, and even more performers only virtually present, moving about on screens?

Or will we have a revival of the 1990’s choreography that said good-bye to contact and expression?

Will we watch motion capture-based performances?

Or dances on roof tops like in Trisha Brown’s Roof Piece?[3]

Or will we dance in marked-off squares that will separate bodies from each other like bodies of homeless people in Las Vegas?

Will there be any policing of the distances between performers?
If so, who is going to do that?
Will we have new professions in the cultural fields, corona and post-corona professions?
Will there be penalties?
For performers?
Choreographers?
Curators and programmers?
Dance houses?

Will dancers go into quarantine (as football players in Germany),
for two weeks?
or less?
or more?
before going on stage?

Will we have only festivals showing dance?
Will they show only performances with no contact and no expression?
Are we facing the birth of corona-proof dance and choreography?

How many of us can be on stage if the space designed for a performer is 20 m2?[4]
How close can we be to each other?
Two meters, as initially suggested by the Austrian government?
Or one meter, as it has been corrected by the same authorities since the beginning of May?

Or maybe like in Germany, where actors:
– have to wear masks covering their nose and mouth and need to stay 1.5 meters apart and
– if the actors are singing or “speaking excessively”, that distance needs to increase to at least six meters.
– When it comes to dance (they call it ballet, Please, don’t) the floor needs to be cleaned at least every hour as well as any object that has been touched.[5]

How far will the regulations for distancing between performers go?
Far enough?
Or close enough?

It will be such a relief to see each other again, live, to be close to each other.
Will we hug? Yes, we are in the dance world.
The same way we used to?
In front of other people?
If we hug each other, don’t we imply that other people who know each other would do the same?
Finding that out, will we feel awkward?
Or, before doing that, will we have a moment of hesitation, not knowing how to salute our dear friends?

The temperature will be monitored.
No coughing will be allowed.
Or maybe there will be no restrictions on coughing,
but you would rather disappear under your seat than let yourself cough.
Maybe they will ask you to wear single-use overshoes, like in hospital.

There will be no interaction between performers and spectators.
The era of interactive performance is over.
There might still be participatory performances with carefully respected distance.

We will be kindly asked to leave.
To turn physical distance into even bigger social distance.
There will be no bars in closed spaces. Only outdoors.
Fine in summer, not so fine during the fall/winter/spring season.

Will we talk about the show we just left?

Will there be an artist talk after the show?
Same procedure, same distance, same masks?
With microphones? Sure, let’s say handy microphones with plastic covers?

Will reviewers review a choreographer’s relation towards the corona restrictions?
Will they praise subtle or less subtle transgressions?
Will audiences leave if they feel offended by these transgressions?
Or disappointed, since they saw none?

Or is it just too dangerous to get together, dance together and together watch dancers dancing together?
Or will it be the same as today: dance not being on the agenda?

In a few days or weeks, theatres’ rehearsal studios will open their doors to actors, performers, dancers.
We are allowed to rehearse, authorities say.
And we ask: Are we allowed to perform?
Like priests that perform services in churches?
And how?
And for whom?

We in the performing arts, we are not the only ones who spend considerable part of their job rehearsing.
Rehearsing for performances.
We rehearse to perform.
Athletes, too.
Sometimes, we rehearse and we do not perform. By our own choice.

People like to see what we’ve been rehearsing for.

We, artists, choreographers, dancers, performers … we can’t wait to start rehearsing!
Thank you for letting us enter the rehearsal studios.

But we are not policemen, firemen and soldiers!
We don’t wait for crime, violence, fire or war to occur to be called to perform.

We are here, and now.
And we know so well how to care about each other.
And when we perform, we care about you.
There is no collateral damage. Come and see.

[1] On 27 July 1656, the Talmud Torah congregation of Amsterdam issued a writ of cherem (Hebrew: חרם, a kind of ban, shunning, ostracism, expulsion, or excommunication) against the 23-year-old Spinoza: “We order that no one should communicate with him orally or in writing, or show him any favour, or stay with him under the same roof, or within four ells of him, or read anything composed or written by him.”
[2] Franco Purini, A thousand times one hundred thousand houses, project for Venice Biennale of Architecture, 2000.
[3] https://www.nytimes.com/2020/04/07/arts/dance/trisha-brown-roof-piece.html
[4] In TQW Halle G (stage floor 279 m2) that would be 13 performers, which is still pretty exceptional, knowing how modest the casts in dance performances are.
[5] From the guidelines issued by the V.B.G., a state-established trade body for insurers. (http://www.vbg.de/DE/3_Praevention_und_Arbeitshilfen/3_Aktuelles_und_Seminare/6_Aktuelles/Coronavirus/Brancheninfos_Arbeitsschutzstandard/BuehnenuStudios_Probenbetrieb.pdf?__blob=publicationFile&v=4)

Janez Janša, born in 1964 as Emil Hrvatin, is a Slovenian performance artist and theorist. He edited and published Maska, a bilingual (English/Slovenian) performative arts magazine, and was director of an institute of the same name for publication, production and education from 1999 to 2006. He has presented many performative and installative projects and given lectures in many parts of the world since the early 1990s. He is one of three theory curators at Tanzquartier Wien.