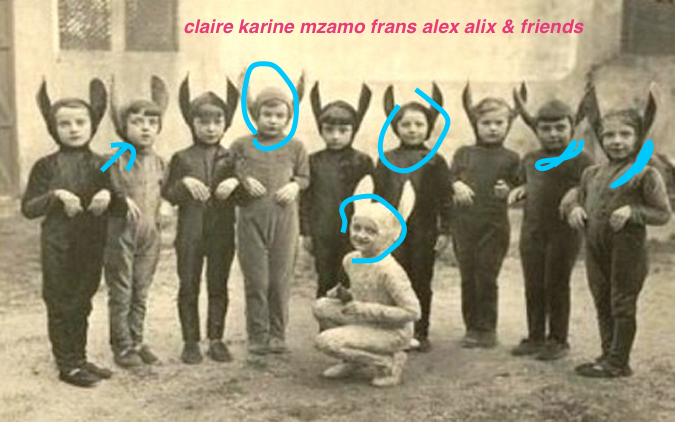 On May 25, 2018, I attended Dub Soirée, a showing of the research laboratory unreal time composition on improvisation by Alix Eynaudi and Frans Poelstra, with participating artists Claire Lefèvre, Karine Blanche, Alex Bailey and Mzamo Nondlwana.

Improvisation in common parlance suggests a casual performing format. When it’s a public showing and not a “jam session” for the artists, it’s easy for the audience to find a place for themselves to enjoy the artists’ virtuosity, playfulness and creativity. It is therefore a communicative format of sorts. Apropos communicativeness: in a PR text about the laboratory I read the following simple and inviting artists’ statement: “We are all experts in friendship. We all know how to dance.” The participating artists hadn’t known each other before the lab, so they singled out these two practices as connecting them all with each other. The first thought that came to my mind was that these also connect them with the audience, since, in a way, we are all experts in friendship and we all know how to dance. Although we can be sloppy in making friends and dancing; although we can have some embarrassing memories concerning friends and instances of dancing, we easily relate to these life practices.

This all promised to serve as solid common ground for everyone who met that Friday at TQW.

The moment I entered the studios in which the showing took place, however, I realised that communicating with the artists’ universe would be anything but easy.

Walking through the piles of personal belongings, books, suitcases, household appliances, notebooks, bottles, brushes and other things scattered all across the space, I tried hard to make sense of them. To integrate them into a story. To perceive them as a consequence of something. To recognise their symbolic value. To understand the metaphor. To let them speak to me. But in vain. One by one, all these attempts failed and I found myself surrounded with something like traces of intelligent aliens. I felt relieved. These things were obscure to me and that was OK. But there was some kind of intelligence behind the whole setting, given that it was a dance showing and not a natural event. A broader question started to take shape in my head: if we cannot discern the meaning of things – and thereby transform them into objects – is this because they don’t have a meaning or because their meaning comes from an intelligence that is alien to us? In the late Anthropocene, as the detrimental impact of human activity on the environment manifests itself, it would be a good idea if humanity just let things be. But that appears to be somewhat difficult. And it seems to me that it would be easier to protect things from us by bestowing them with the idea of alien intelligence, if only because we need them.

Curiously, the performers acted like the things. They put on and exchanged odd clothes among themselves – colourful pajamas, dresses, sports jerseys, very gender-specific clothes which they wore irrespective of their own gender – but they never explained their choices. They sang and played music, let us smell the small bottles, and handled devices like copper pots and pipes that looked a bit like alchemical equipment. They told anecdotes from their lives and shared some of their emotional issues… Or maybe those were someone else’s problems. Sometimes they moved from one studio to another, and most of the audience followed after them, although it was unclear why certain acts took place in one room and others in the other. All in all, the aliens remained alien to me until the end, which made me reconsider the meaning of friendship, sharing, common ground and my own concern with the stage as re(s)publica – a democratic agora (republica) and a public matter (res publica).

When I started writing this short reflection with the intention of reaching a wider readership, I realised that I should mention at least some of the main references operating beneath the performance’s obscure surface. It seems to me that the context of the Teachback project plays an important role here, as it provided the artists with artistic-educational tools used to generate materials, such as Oracle Dance.[1] The other, probably the most important reference is found in the title: João Fiadeiro’s choreographic method of real time composition. This approach is complex in itself and, on top of that, the showing comments on it, probably rethinking the realness of the time in which encounters with time, space, audience, things, etc. happen in performance situations.[2] I’m not sure if I would have noticed this connection myself but I’m positive that none of the non-specialist visitors had a chance to do so – simply because there are layers of specialist knowledge, a dense net of theoretical and artistic references, a long history and genesis of problems pertaining to the field of dance, that are all present in this simple and playful showing that promised to deal with familiar subjects such as friendship, improvisation and dance.

As a result, I cannot make this reflection more communicative than it is. Naturally, I could say: “You as non-specialists don’t need to understand everything, you don’t even need to understand, it’s OK to just stand there and open yourself up to a new experience.” Oops, this (under-standing) is yet another specialist reference to Fiadeiro’s poetics… So it probably isn’t appropriate advice at this point. Moreover, it would stop me from saying the following:

Contemporary dance is usually not communicative. It is commonly not of interest to a wider audience; that is all it wants to be or what it is told it needs to be. Usually, it is shown to other specialists: artists, theorists, curators and art students. Because of that, ticket sales don’t yield a profit. This in turn means that contemporary dance is constantly in danger of being done away with by neoliberal cultural policies. Contemporary dance is experimental. As a result, it is sometimes commercially unsuccessful and often hermetic and opaque. To conceal this fact, it is occasionally funny. Contemporary dance tends to be complicated because it deals with serious problems – of dance. The problem is that dance itself is not taken seriously enough to be welcome to publicly share its problems. TMI! And yet this is precisely what contemporary dance has to do, as it exists only in the encounter with an audience, on stage, as re(s)publica.

This is the main paradox I faced in regard to unreal time composition. And here, instead of resolving it rhetorically by saying: “You don’t need to understand”, I opt to present it bluntly to readers. You should know, not only in the context of this showing, that paradox hovers like a ghost over contemporary performance – a desperate art, an art that lives only if we let it live with(in) us. Like a virus. Or indeed a friend.

Ana Vujanović works as a freelance cultural worker – scientist, author, dramaturg and activist – in the field of contemporary performing arts and culture and is editor-in-chief of TkH – Journal for Performing Arts Theory. One focus of its work is the promotion of the independent scene in Belgrade and the former Yugoslavia. She has taught at various universities and study programmes in several European countries, was visiting professor for performance studies at the University of Hamburg and is currently a lecturer at the HZT Berlin. Ana Vujanović works as a dramaturg and coauthor on artistic projects in the fields of performance, theatre, dance and video/film and has published numerous articles in journals and anthologies as well as four books. She currently runs the independent research project Performing the Self in the 21st Century with Bojana Cvejić and Marta Popivoda. anavujanovic.net

[1] This is mentioned in the programme leaflet but I don’t know what it is, nor did I find an explanation online, nor did I have time to contact Alice Chauchat and Jennifer Lacey, the initiators of Teachback. Information about the project itself is available here.

[2] Christina Gillinger, who had visited some of the lab’s sessions, told me about this. A very in- formative interview with Fiadeiro is available here.