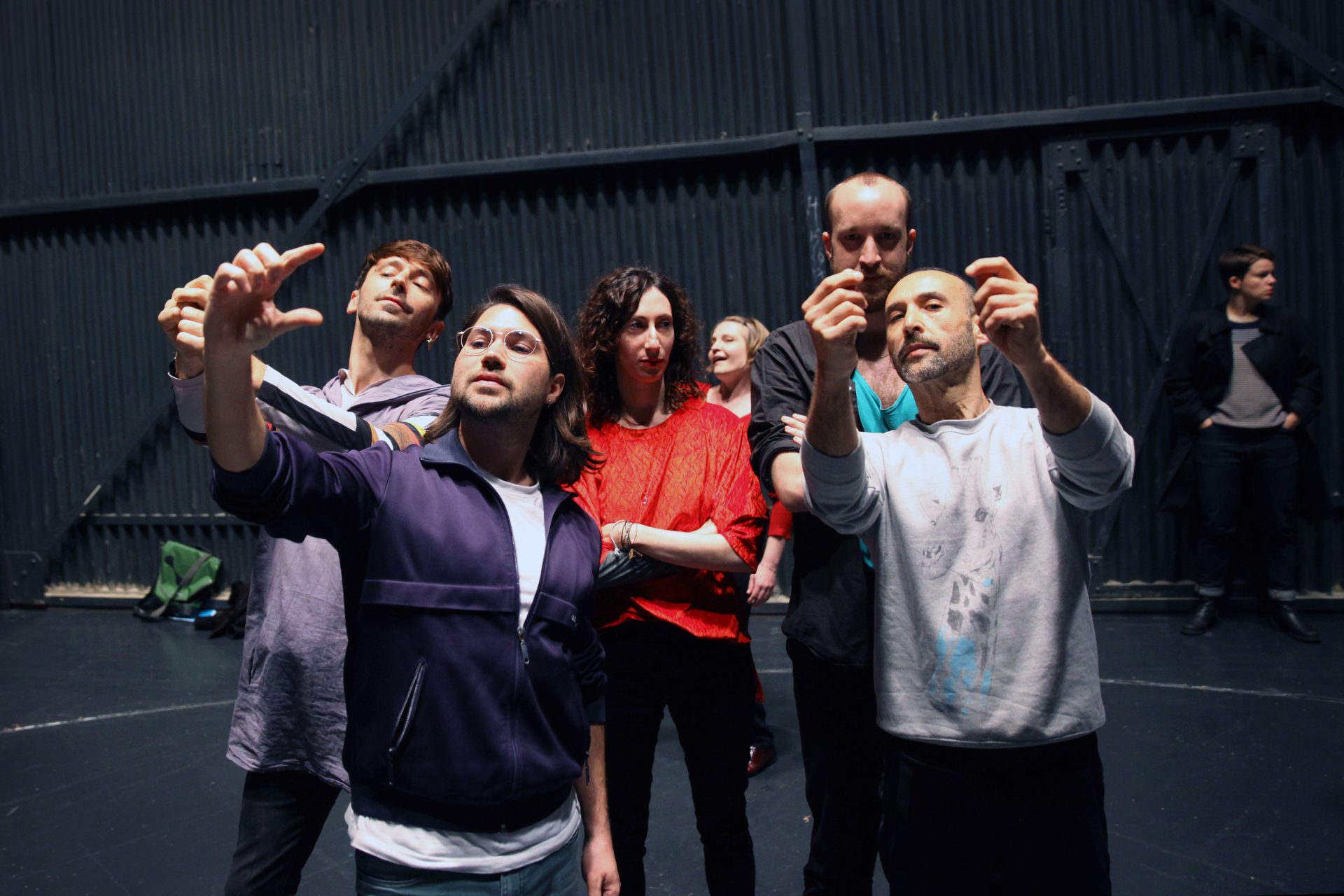 “You can now search for a word and we provide you with the relevant information that we have.” The five performers give answers to the search terms supplied by the audience spontaneously and at their own discretion. They remember, define and quote from their own horizons of knowledge and experience. And because their memory doesn’t follow an algorithm, they are allowed to forget. Einstein’s formula E = mc2, for instance. What does c stand for again?

Alexandra Pirici’s performative installation Delicate Instruments of Engagement ponders memory conveyed through media. She poses questions concerning the autonomy and automatism of memory production and shows which events and information are included in the collective memory. The narration takes the form of an enumeration: the performers ecstatically sing George Michael’s “Freedom! ’90”; pull grinning, fretful emoticon faces; hold a selected audience member’s ears shut so as to reference Joseph Beuys’ installation “Plight” or simultaneously recite the almost identical speeches of Melania Trump and Michelle Obama. High culture and popular culture, politics and current issues in global affairs are brought to mind, translated into verbal language and body language. The performative enumeration does not distinguish between Salvador Allende’s final speech before his death and the Internet meme of a baffled-looking John Travolta. Political, pop-cultural and societally more or less significant references are mixed without committing themselves. What generates attention is what counts.

The audience are encouraged to take part in the action: “You can now choose a different beginning!” This involvement in the repetitive automatism of enumeration is a mock engagement, as the order of the various references doesn’t really matter all that much. The emancipated spectators can come and go as they please, can participate and decide – if they wish to do so. The utopia of a non-hegemonic discourse has been revived online and is also implied by the performance’s personalised information machinery. Participation instead of a passive use of media.

The body acts as a processor and transformer in Pirici’s work, producing national memory, art-historical canon and colonial collection history in new ways. In 2011, she called to mind the role of memorials as monumental manifestations of national commemorations in “If you don’t want us, we want you”. In 2013, she reworked the project, originally developed for the public space, for the context of visual art together with Manuel Pelmuş. The works of art personified in “Public Collection” loosen the tight reins of art history. Delicate Instruments of Engagement tackles yet another range of mediatised memories. The body as a medium reflecting societal conditions also re-examines the role of performance in art history. Body art was an important part of civic and feminist protests in the 1960s and 1970s. The actionist avant-garde works critical of institutions drew on physical presence. Institutionally appropriated, they are now exhibited in the form of historicising documentations in museums. Pirici negotiates the relationship between the body and the institution for the present: bodies appropriate the spaces of public commemoration, art history and the production of meaning in her performative actions. Repetition clashes with the concept of authentic presence. Pirici’s enactments between past, present and utopia activate and archive, relate and recall.

Stefanie Zingl studied theatre, film and media studies at the University Vienna and at Universidad de La Habana in Cuba. Her reserch is concerned with ephemeral film as a cinematographic way of memorizing. She is also a film archivist at Österreichisches Filmmuseum and at Ludwig Boltzmann Institute for History and Society.

Stefanie Proksch- Weilguni is doing her PhD in art history at the Universities of Basel and Vienna. In her thesis, she focuses on Maria Lassnig and the Women/Artist/Filmmakers. In her writings, she deals with body art and feminism, e.g. Alexandra Pirici’s performative practice and the exhibition: Carolee Schneemann. Kinetische Malerei at Museum der Moderne in Salzburg.

Alexandra Pirici’s Delicate Instruments of Engagement wanders through the past, the present and the future, pondering the increasingly...