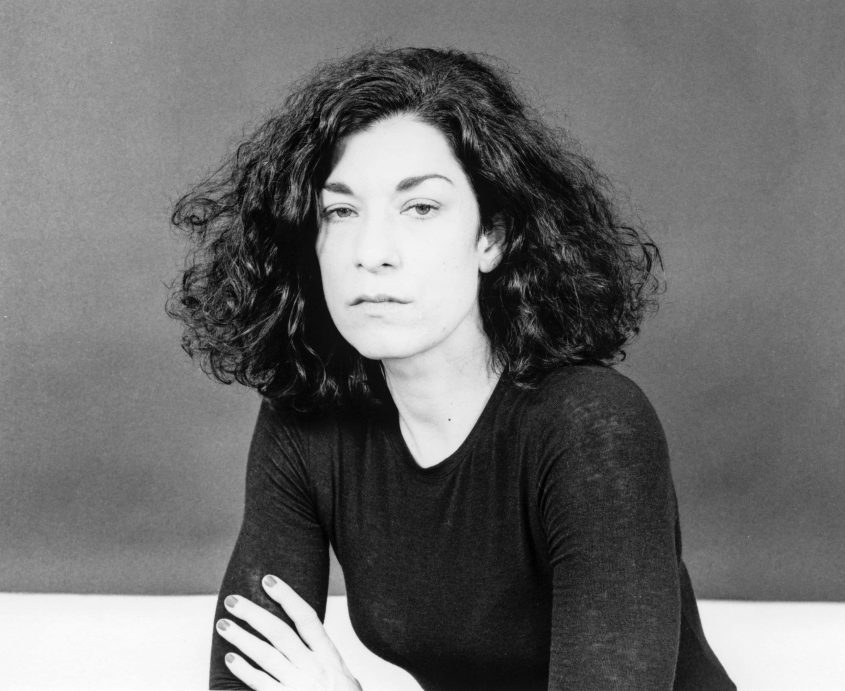 The Austrian premiere of the TQW co-production Chasing a Ghost by Alexandra Bachzetsis was planned for 24 April and will be rescheduled for the next season. Journalist Karin Cerny (profil, Theater heute) attended a performance at Dampfzentrale Bern in early January and interviewed the artist subsequently. A conversation about desire and identity construction, martial arts and, last but not least, the theme of the doppelganger.

KC: Your most recent work, Chasing a Ghost, includes several duets. However, while the classic duet is mostly based on a somewhat romantic, monogamous relationship, the partners in your duets constantly change. Is there a specific reason for this?

AB: It’s all a sensual play with references, modes of representation and the self. I was especially inspired by Arthur Schnitzler’s play La Ronde; my own title Chasing a Ghost is derived from Schnitzler’s dramaturgy, which is based on the structural theme of the ten consecutive dramatic duets in which the protagonists are permanently engulfed by emotional frenzy and chase after unattainable ideals. To dance such a duet also means to unveil the nostalgic undertone and to counter the common misconception of a duet that is most likely rooted in this need to live in harmony. I’m not interested in ideal body images but in the illusions encapsulated in those images. This also includes the utopian potential of the various constellations of bodies.

KC: You also work with the theme of the doppelganger, this sinister motif from the Romantic period.

AB: Structurally, my work relies heavily on Sigmund Freud’s study of The Uncanny as well as Stanley Kubrick’s film The Shining in which the twins roam the empty hotel rooms. These girls were the iconic image material on which I based my concept of the uncanny doppelgangers. The starting point for me was the question: In what ways does the repressed emerge from distorted, grotesque forms? The continuous change of duet partners represents the scale of the unresolvable estrangement that occurs while people are in romantic relationships. It’s about the familiar movements that are constantly repeated and consequentially become more and more strange and absurd. What is the original? What is the copy? Such questions are the most important assets in the age of replicability, simultaneity and immediacy of our experiences. Former cause and reason have now mutated into consequence and impact. This way, it has become almost impossible to search for the origin.

KC: There is an irresistible energy and drive to the sound created by the two piano players, who do not shy away from handling their instruments quite forcefully. How did you get to work together?

AB: Mischa Cheung and Simon Bucher had previously worked with me on my project Massacre Variations on a Theme, which was presented at MoMA in New York. The score for Chasing a Ghost is a direct product of pop culture. We started out with a compilation of electronic tracks, similar to a DJ set, and then Mischa and Simon played and rearranged the material on their pianos. This way, the performance turns into a compelling concert, much like a DJ gig – except for the very different stage setting – because the pianists are performing this repetitive and physically demanding music live. Their music also accompanies the film sequences and the duets. The entire sound concept is based on this idea of producing a live analogue DJ set on two grand pianos.

KC: I was also intrigued by how you play with and mix different components, like dance and martial arts.

AB: Blending contradictory elements and contrasting opposing poles are key ingredients for all scenes in Chasing a Ghost. It’s all about exploring the power dynamics; for example, there is the soft porn scene, where you can see both skin-coloured nylon tights and a purple roll neck jumper, a white tank top and black briefs. Or the semi-nude kung fu scene. There you can also notice the doppelganger motif: one body made from two, one dissolving in the other – or fighting it. Each time, the partner functions as the mirror image of the own conceptions (of power) in a relationship. In the kung fu scene, both performers share one costume, a track suit, with the man wearing the bottom and the woman the top. Together they are one outfit. In the soft porn scene, the camera is directed at the performers so you cannot see their heads – it’s as if these people weren’t really present and only their bodies matter. As the scene progresses, the performers start to wrestle with the technical setup of the camera as well as with the emotional intensity of the sexual gestures. Here, I’m less concerned with the relationship between man and woman in regard to the power dynamics and more focused on the interplay of the physical act and its representation.

KC: It seems to me you think a lot about identity as an obscure, fickle concept.

AB: I spend much time thinking about the social and political construction of identity and desire. Everything is at the same time an enactment as well as a reality. You cannot distance yourself from your body if you want to work on stage. Our costumes are pieces from a collection by London label Kwaidan Editions. They are therefore not costumes in the usual sense. Instead of dealing with images from the internet or representation models, I always try to create real people with real bodies, with whom you could also have a real conversation. By using the distancing element introduced by the camera work and the framing of the video image, I accentuate the unresolvable discrepancy of the relationship between original and copy, enactment and reality, emotionality and its reproducibility. Still, I also want to make sure that there is space for the emotion and fantasy of the audience, not just enabling a critical reading but also an affective response. In Chasing a Ghost the audience is invited to chase after their own emotional, erotic, sexual, unsettling and uncanny ideals.

KC: The way you portray desire and sexuality is quite explicit. And it is about confident women who take what they want (an element you pick up on with the costume design of the broad-shouldered 1980s sports jackets). How important would you say is it to tackle and subvert gender stereotypes?

AB: I don’t believe in the dichotomous relationship male/female and I try to show the limitations of and how outdated such a binary system is. I work with the conventional connotations of this binary terminology in order to deconstruct it within the experimental setup of Chasing a Ghost. My focus is on the theme of the duet in relation to the diverse gender constellations. The body in all its corporality is my material. I work on my thematic montages in an abstract and associative manner – not based on a narrative form. I use my body and the body of the others and turn them into communication tools. The human body is a vibrating venue for transformation and experimentation. I am interested in its uncanny nature, its multiple passage-ways through gender and age, and its struggle to be present.