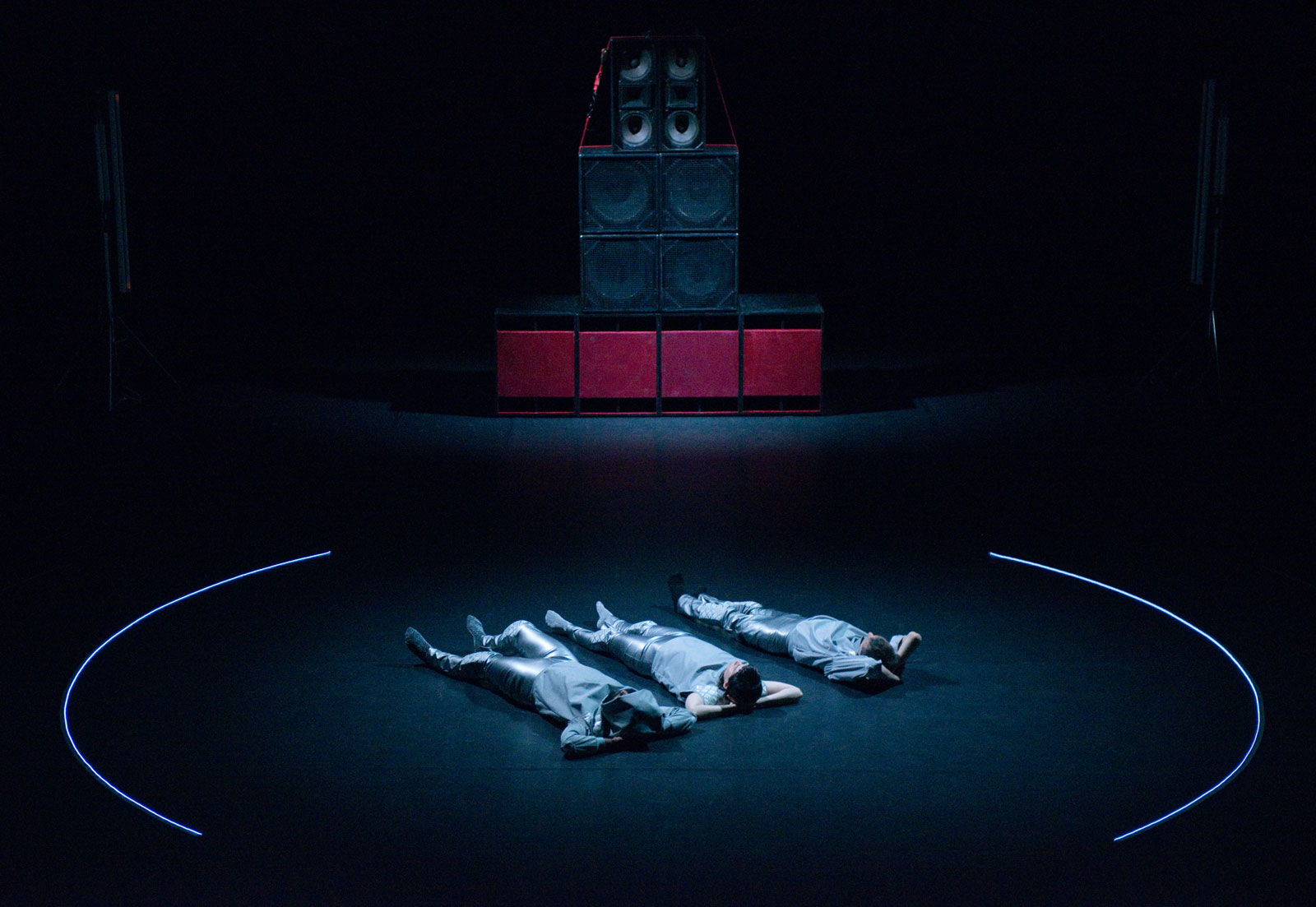 The individual is the most basic unit of society. Etymologically derived from the “indivisible”, individuality is the nucleus of any individual person from which the self evolves. However, the individual person will inevitably encounter other individuals and therefore join up and multiply. Due to the human being’s inability to be alone, the individual will always join and surround themselves with other people because the individual can only ever exist in a social context and through communication with others, regardless of the communication’s materiality. In light of this, one might begin to believe there was a shift in the Weltgeist, from focusing on the individual mentality to cultivating a collective mentality. Except, there is no such trend in Western society – on the contrary: in politics, the community takes a back seat to the individual. Admittedly, this appears to be a strange and self-contradictory phenomenon.

Starting with a moment of sheer stasis, the three performers, Andreas Guth, Mzamo Nondlwana and Elizabeth Ward, go on to activate their bodies while they still take their time to settle in together. They form a group in spite of or even precisely because of the various identity categories that could be applied to them: different sexes meet different skin colours, which in turn meet diverse bodily functionalities. They too seem like they were beamed down to this scenario designed equally by light and sound. The silver suits worn by all three performers make them appear united. Thus united, they devise a vocabulary of movements which translates from one body to the next and makes it hard to discern where one body ends and the other begins. Movement becomes a moment of togetherness, a collective moment which any of the three performers can access. They start to circle and are being whirled around this egalitarian space which knows not of any identitarian categorisation. Each performer moves together with the others without becoming a blunt instrument of the crowd. Instead, joyfully and passionately dancing they constitute an egalitarian mindfulness. While they support and hug each other, the three bodies merge into one. This is just one of the many remarkable transformations which take place over the course of this performance. The constant repetition of specific movements transforms the bodies of the performers. They move back and forth, they lose any sense for the own body’s limits, they translate from one body to the other – and back again.

This way, Michael Turinsky creates a space in which the wishedfor solidarity might be possible and accessible to all. Generally, absolute recognition of diversity as well as joy generated by a collective achievement should be appreciated a lot more. There is nothing worse or duller than to pursue human monotony or the infinitesimal particle of selfhood which is expected to be something special itself. Indeed, what we were able to study here was something way more elaborate – to watch someone trying to create a utopian space in which all participants are equally involved in facing a task that unites in egalitarian mindfulness and mutual joy.

Andrea Salzmann lives and works as dramaturge and performance artist in Vienna. She collaborated with Sabine Marte, Doris Uhlich, Barbis Ruder and Teresa Vittucci. She has been teaching at the Department for Performative Art at the Academy of Fine Arts in Vienna since 2012. In 2017, she was artist in residence at Bilbao Arte. She will be a BKA scholar in Sewon Art Space in Yogyakarta in 2019. In her work, she focuses on social affiliations and functions and their potential for political change.

Michael Turinsky puts up resistance with Reverberations: against increasing individualisation in our society, which celebrates the spectacle of...