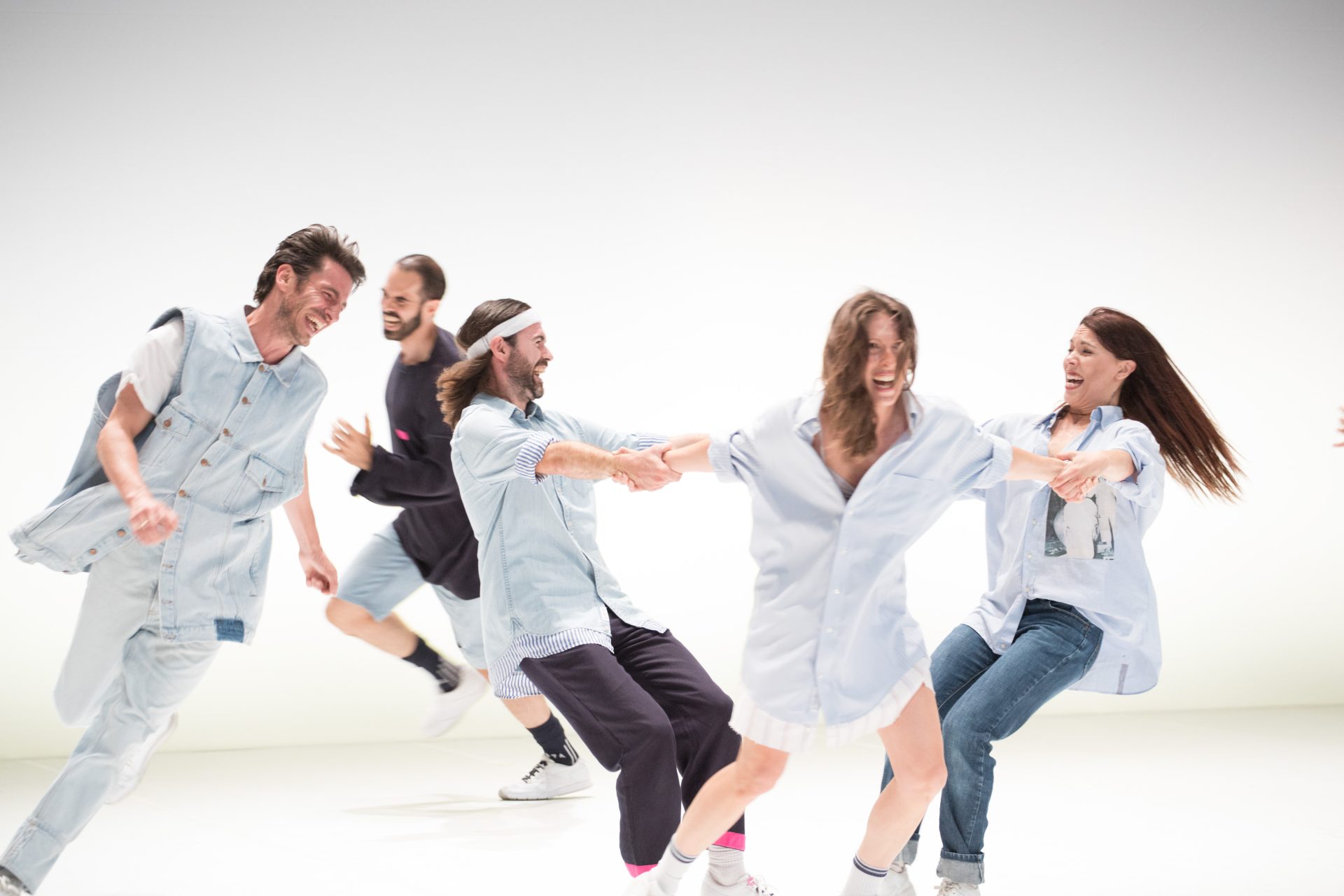 Nine people dressed in blue enter the stage in step. They form a circle and march their rounds in time; they function, they obey and eye each other critically. They are uniformed in blue: jeans and shirts. And then it bursts from one performer and then the next, until they are all shaking with laughter – the neat order crumbles!

In Augusto, Alessandro Sciarroni confirms philosopher and sociologist Helmuth Plessner’s hypothesis that bodily processes emancipate themselves in situations which render meaningful answers using signs, gestures, language or actions impossible. Laughing (as well as crying) signals the expression of loss of control; it is the body’s response to a crisis in an effort to gain mastery over moments in which cognitive and emotional capacities fail. Laughter creates distance and enables the self to gain a self-determined understanding of the incomprehensible – power in impotence and freedom in coercion.[1]

In a self-disciplining society in which happiness is equated with success and power structures have inscribed themselves in the body, impulses that endanger these structures must be suppressed.[2] According to philosopher Henri Bergson, spontaneity and freedom are originally inherent in humans, and laughter corroborates this as it breaks out whenever people act in a rigid, automated manner, thereby ignoring their innate instincts.[3] Anca Parvulescu has postulated that unrestrained laughter has the quality of an event in which the self is unleashed in an unbridled and spontaneous manner. Laughter is a passion in itself; a passion for the real and at the same time an indication of other passions; an expression to which no emotion can be assigned. Inappropriate laughter that bursts out in the wrong place at the wrong time must therefore be civilised and aestheticised in the modern age.[4] But laughter is human and cannot be subdued. It breaks out time and again, on appropriate and inappropriate occasions. Its uncontrolledness is contagious and can have a subversive effect. Because laughing about the same thing creates familiarity – closeness, solidarity and a sense of community emerge. However, laughter may also serve to exclude, because the group strengthens its cohesion by laughing at and excluding those who do not fit in.

The performers come together in laughing as an act of liberation. They are united in resistance to standardisation and create positive feelings. In an upward spiral, they bring fun and cheerfulness to each other; they run, chase each other; they bounce and jump for joy. Their bodies fall into and through one another. All that was suppressed has cleared a way for itself; bursting from them and flowing from their wide-open mouths. Together, the dancers are laughing at rage and torment. They laugh because the others break away from the norm, because their behaviour is strange and they don’t do what is expected of them. They shake, they double up, they gasp and snort; they squeak, giggle and neigh; they twitch and they roll; they hold their sides with laughter, they collapse with laughter, they cannot breathe with laughter; and they laughingly resist the forces that pull at them and the disaster that threatens them. They laugh because their laughter is absurd and inappropriate and because they no longer know what they’re laughing about. Energy spreads throughout the theatre. The audience is drawn in and made to participate. They and we laugh about each other and with each other, the laughter has acquired a momentum of its own.[5] And all of a sudden it turns into exhaustion and emptiness, and the pain is back. The performers are standing in the spotlight all by themselves. The mood has changed, the community has fallen apart. Some start screaming; ear-splitting cries of pain pierce the room. The laugh that sounds now is dull, angry, desperate and rebellious.

And then there’s this other laugh: violent and brutal, cynical and hostile. That rises above the others; that neither comforts nor alleviates, that does not create distance from grief and fear; that is not alive, forgiving, relaxing and invigorating; that does not laugh at the absurdity of life. Its psychological function is not transgression and healing but gaining power. It is petty, rigid and narrow; it wants to limit the freedom of others and put them in their place[6] – an aspect that isn’t fully explored in this production, which regrettably features only two female dancers among many men. At some point, the performers’ laughter becomes unbearable; it seems fake, superficial and banal. We were laughing with them only a moment ago, we let ourselves be infected, and now everything seems empty. And just as I ask myself if this is one-sided and euphemistic and devoid of a critical view, one of the dancers suddenly strikes. The woman falls to the floor, gets up again, looks at him and then laughs, confused and forgiving. But he laughs with her and strikes again and laughs violently, humiliatingly and brutally; and strikes again and she is not laughing anymore. Then she does start again, but now her laugh has a different quality. It is the aware yet fatalistic laugh of those who have no choice but to laugh or scream or cry.

At the very end, after all conceivable varieties of laughter have been tried out and tiredness has set in, the silence is shaken by soft crying. It increases and spreads throughout a man’s body. He doubles up, as he did earlier when laughing, and his torment seizes the room. A dancer detaches himself from the perplexed silence, bends down, caresses the desperate man, holds him and calms him down. Soothed but ashamed of his outburst, his self-exposure, the collapsed performer laughs with embarrassment, and the other man joins in. Lovingly and understandingly, the consoling man takes away the loneliness of the sad man’s pain and, laughing, shares with him the helplessness of those who want to love but remain unloved.[7]

Berenice Pahl, born in Munich in 1970, studied acting, directing, visual arts and education in the arts in Vienna. She lives and works as a teacher, curator and performance artist in Vienna. She is currently working on her thesis “Humor als feministische Taktik in Performance Art”, having done research on the topic in New York in the scope of a Marietta Blau Grant in 2017/18. The focus of her artistic and scientific work is on gender-specific and racism-critical issues as well as on methods and strategies of self-empowerment.

“And yet there is something esthetic about laughter, since the comic comes into being just when society and...

Following the second show of  Augusto, choreographer Alessandro Sciarroni will discuss his work in conversation with theatre scholar Stefan... 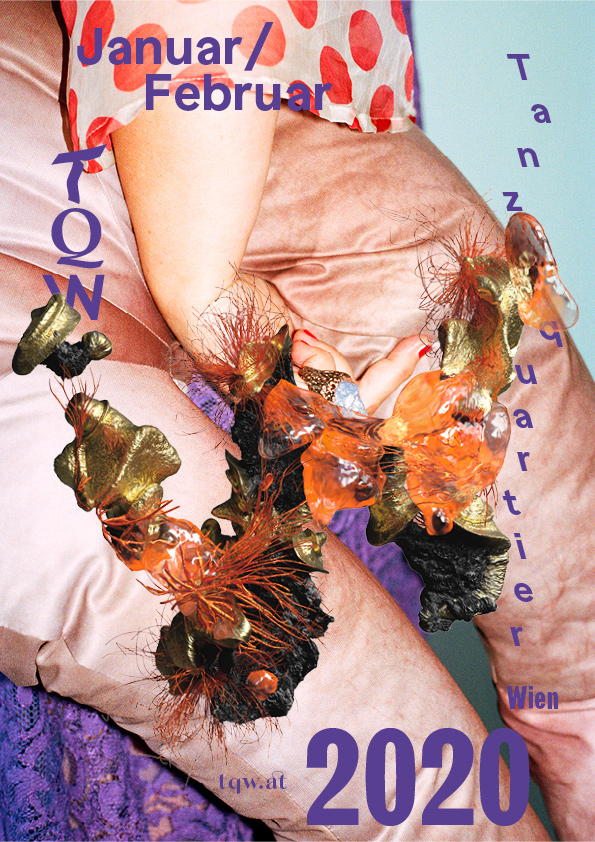 Dear audience, dear artists, we start into the new year with a dense programme, featuring a new thematic...