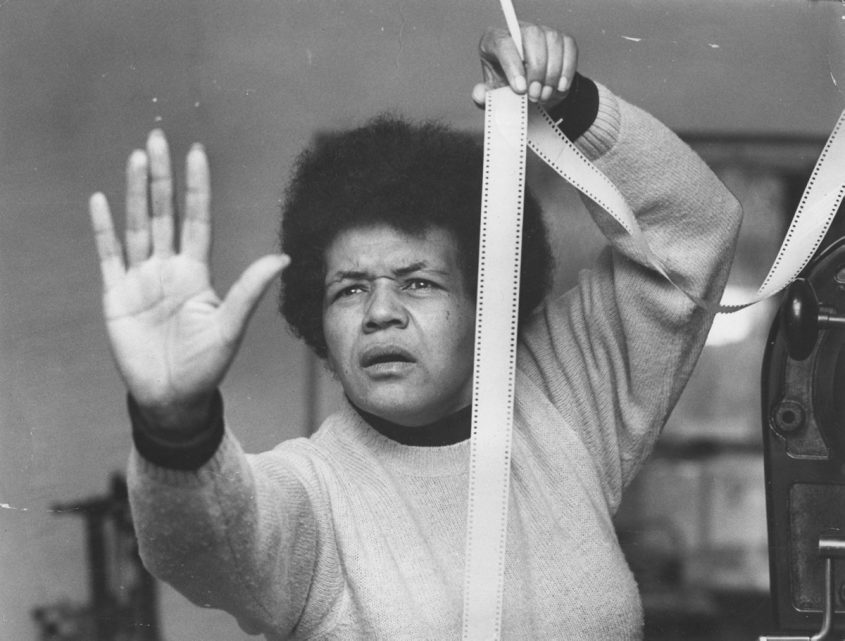 For the Sarah that’s gone, for those with us and those to come

Instead I want to write about connection, anchors, and continuity.

I want to write about Sarah, because she is an incredible inspiration and I need that feeling. I need people like Sarah, and I believe many of us do. Sarah Maldoror – activist, performer, filmmaker, thinker, connector of people – moved me, the moment I met her.

Right now I think a lot about her short film Monangambée. About the moment of embrace that two lovers shared. “Monangambée” was an Angolan expression used in colonial times, a shout to convene, to come together to plot, discuss the news, make plans, reach decisions. This film made room, opened up cracks in the prison that is oppression. It did not fall prey to pain narratives, and yet the unspeakable violence is not glossed over, a hint of it is shown. But shown only in dialogue with care, that word so overused it is almost empty. Here care is full: full of sweat, risks, kindness, knowledge, generosity, attention, worry.

Monangambée is directed towards an Angolan independence yet to come. The country and its people still faced six more years under Portuguese colonial rule. Sarah Maldoror shot the film 1969 in Algeria. She was in Algiers together with many others from across the world preparing for the many more fights for liberation yet to come.

I want to write about Sarah Maldoror, how the work that she has done is not over, how its impact continues, this net of people, acts, places, ideas and desires for a future that is different from the present. How the struggle continues, in the same and in different ways. Sarah Maldoror definitely understood the power of making connections, introducing people to each other, sharing time, work and ideas. This is also reflected in her documentaries on artists, musicians, poets, philosophers.

Coming together means to move and might turn out to be continuing a movement. Coming together because of necessity, because of a shared desire for beauty, for disruption, for learning, for curiosity, for empathy can be transformative.

Early in her life she was a Black French performer in the 1950s getting tired of getting no roles in all white casts. She did not stop at being tired though. In 1956 together with Toto Bissainthe, Timité Bassori and Ababacar Samb Makharam she co-founded “Les Griots” in Paris. They worked with Aimé Cesaire, Jean Genet, Med Hondo to name just a few. Their troupe created a platform and opportunities for the Black performers of Paris, the intellectuals, writers, poets and their audience.

Coming together needs spaces to meet – physical, virtual, spiritual. One needs to create and fight for these spaces, because they are contested virtually and physically. Now mostly shut down, but soon open: there are spaces to come together and I want to ask: with whom? Whom do we want to meet? To invite? And for what? Whom do we want to share time, space and energy with? Towards what goals?

In the early 1960s she left France for Russia and studied film in Moscow on a scholarship alongside many other artists from the colonies of Europe. She left for Algeria, Guinea-Bissau, Angola and made cinema, a militant cinema. Her art serving liberation. The formal end of an era, fought for with arms, dedication, pens, films and defended with torture, and full force of violence – the formal end of colonialism in many places of the world is not even a lifetime ago.

I was humbled by how she radiated. How fierce she was, despite her frailty, the frailty of the body that comes with age. It is no accident that there is more than a tendency to feel alone these days, but not much is ever new and other people might have been there. To learn about previous successes can be hard if the prevailing narrative is all about oppression. In movements that are non-conservative, it is a constant struggle not to lose anchors, records and important connections over time. Sarah Maldoror was many things, and she is an anchor.

She is someone I can look up to. When I think of her I can summon up more courage. I remind myself: if Sarah could do all this, you can do this little thing. This little act of courage. I want to take up the thread of these dreams, because they are mine to; contribute to the realization of these desires, because they are mine too; and I want to hold up and pronounce these desires and join the fight for them, and I know it is and possibly will be a constant fight. I am ready to fight it now, because now and thanks to people like Sarah Maldoror I know, I am not alone and I was never alone. Whatever I am able to do is doable, because people like Sarah Maldoror did the work they did. I want to learn to be a little bit more like her. I do not know the price, but I know that I can afford more.

She was a great lover of art and poetry, of things unsettling, turning, moving. Movement through time as well as space, moving politically, aesthetically and probably the basis of it all: of moving together. Bringing people together is an art she practiced vigorously and effortlessly. She created opportunity, introduced people to each other and kept record of movements that aimed at changing the status quo like the Négritude.

In this spirit I want to end by stating the obvious. There are so many others, performers who continue this work of changing the present like Okwui Okpokwasili, Taigué Ahmed, Mzamo Nondlwana, Qudus Onikeku, Jimmy Robert, Grupo Oito, Juliana Huxtable, to name just a few.

This is to Sarah, to her life and the lives of all that came before and after her. May they be full of joy and shared desire.