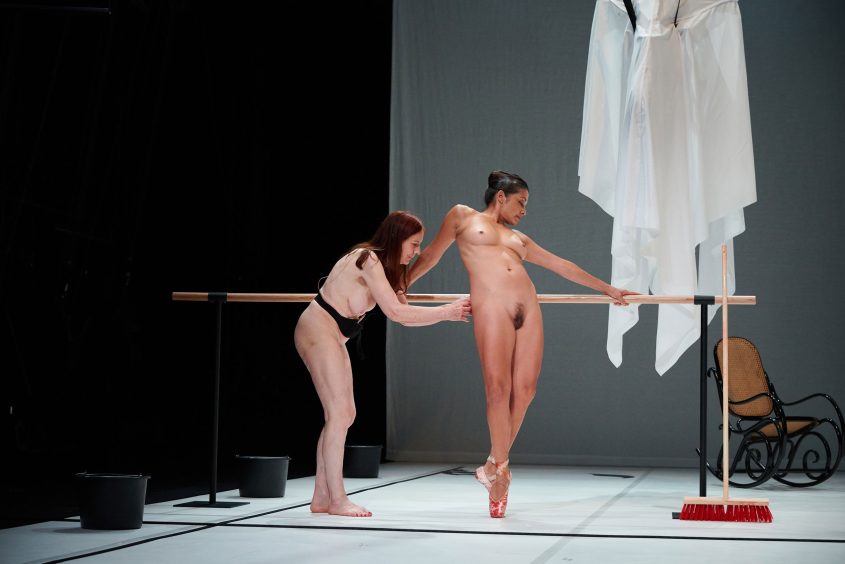 “Come on girls, bring the barres in.” Beatrice Cordua, after a long career in ballet, stands on the stage of Florentina Holzinger’s TANZ and leads a ballet class. The students, only women, do pliés and jetés following her instructions. TANZ is the third work completing a trilogy – also including the works Recovery and Apollon – in which Holzinger looks back to the history of European ballet: after Balanchine’s Agon and Apollon Musagète, here the starting point was romantic ballet and the figure of the Sylph, even if the work also turns towards later repertory, like Swan Lake.

Cordua’s staged ballet class looks nothing like what one would expect of it: the teacher is naked; the dancers gradually undress themselves as well; the class morphs into an orgasmic description of the students’ vaginas and to an invitation to “do the rats” – a wink to the name given to young corps de ballet dancers of the Paris Opera during the romantic period. But the more TANZ diverges from the aesthetics of ballet, appropriating and desacralising it, the more Holzinger’s work approaches the very raw reality that this historical dance form still carries.

Romantic ballet was feminised: in stories centred around female protagonists, in its cult of female star dancers, in its overwhelmingly female corps de ballet, it celebrated and adulated a dancing womanhood. But this womanhood was to a great extent constructed through a male gaze upon it – from the dance critics engaging in detailed, almost voyeuristic descriptions of female dancers’ bodies to the well-off Paris Opera patrons who could have access backstage, to the thinly disguised sexual market of the foyer de la danse, and from there to librettists writing ballet scripts in which women were victims in unhappy endings.

In TANZ, the all-female cast has learnt this lesson. The women on stage are followed, closely looked at, turned into images available to the audience, through the projection of their acts and bodies filmed in real time. But the person operating the camera is also a woman, and her lens doesn’t only function for the satisfaction of voyeurism, but also transmits the effort and concentration of the dancers, the work and exertion of their muscles. When the ballet class is over, and the performers engage in other activities of what Holzinger calls ‘Sylphic Studies’, any victimhood is effaced as the dancers defy gravity, pain, fear, mental and physical barriers.

Romantic ballet was attracted to the mysterious Other: in several works of the romantic repertory, a juxtaposition is created between humanly inhabited, relatable settings and supernatural realms found in nature. It is in the magical settings in nature that many of romantic ballet’s feminine figures dwell. These may be enchanting and/or enchanted creatures like wilis and sylphs, impersonated through a dance of elevation, pointe work contributing to the sense of weightlessness and suspension emanating from the dancers; complex scenographic tricks like trap doors and pulley systems assisted in the illusion, with dancers risking accidents to fly across the stage. Romantic ballet’s feminine, supernatural figures were also, at times – like La Sylphide’s Madge – evil anti-heroines like witches, staged by employing the imagery of the – persecuted and tortured – ‘witch’ in European history.

TANZ, at a time when the figure of the witch is re-appropriated by feminism and ecofeminist approaches align struggles for women’s rights with the protection of nature, has once again learnt this lesson well – all too well. Midway through the piece, the stage background turns into a forest image. The performers impersonate and give birth to animals or transform into ghosts, highlighting their not-fully-human nature; a contemporary witch crosses the stage on her – electric – broom. But most crucially, the dancers strive against gravity and towards flying: on pointe, or using ropes and counterweights, or climbing on suspended motorbikes. The Sylph had wings attached to her costume, at the level of her shoulder-blades; Odette rippled her arms, engaging from the shoulder-blades outward, to impersonate a swan; both were ethereal and beautiful, concealing the effort required in order to have wings and fly. Towards the end of TANZ, a performer’s shoulder-blades are literally attached to mechanical wings; the effort, pain, determination and power needed for this are made evident: here, ballet is not an illusion, it is very much real.